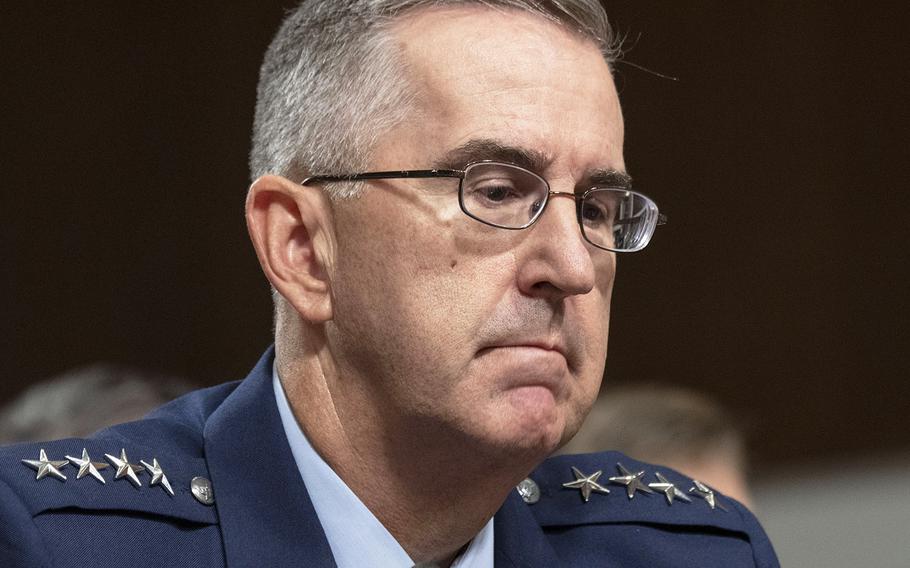 WASHINGTON — Air Force Gen. John Hyten, the military’s No. 2 officer, intends to retire next year at the end of his first term in the high-level Pentagon position, his spokeswoman said Monday.

“Gen. Hyten has always understood his tenure as vice chairman of the Joint Chiefs of Staff would last two years and plans to retire upon the completion of his term,” said Air Force Maj. Trisha Guillebeau, his spokeswoman.

His term is set to expire in November 2021. It will come as the Pentagon implements a new rule from Congress that lengthens the vice chairman’s term in office from two years to four years. Seven of Hyten’s 10 predecessors in the job have been renewed for a second two-year term in the office. However, if Hyten were to be nominated to a second term, he would serve a total of six years in the job, which would be unprecedented.

Hyten’s retirement next year would also follow Congress’ intent to ensure the beginning of the new four-year terms for the chairman and vice chairman are offset by two years, Guillebeau said.

The general has long planned to retire, even before his tenure as leader of U.S. Strategic Command began in 2016, defense officials said last year when he was nominated for the vice chairman role.

Hyten was sworn in as vice chairman about one year ago after he was confirmed in a 75-22 vote by the Senate amid sexual assault allegations raised by a former top aide from his time as commander of STRATCOM, which is responsible for the U.S. nuclear arsenal.

In her lawsuit, Spletstoser alleged Hyten forcefully kissed her and pressed himself against her in a hotel room during a 2017 work trip. Last month, attorneys for Hyten unsuccessfully sought to have the lawsuit dismissed.

Hyten has long maintained his innocence. He forcefully denied the allegations during his confirmation hearing. Air Force investigations of Spletstoser’s allegations found no evidence existed to charge Hyten with a crime or recommend nonjudicial punishment, service officials said last year.

“This case has been taken seriously by the Air Force and the Department” of Defense, Guillebeau said in a statement issued Monday. “It has been rigorously investigated and reviewed. And at no time has corroborating evidence or testimony been found.”