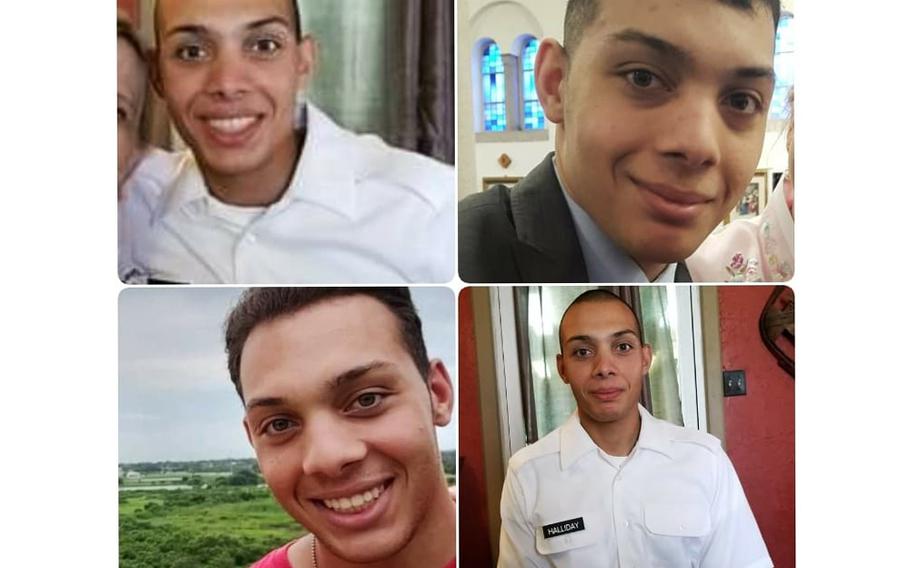 Despite a dozen agencies in two countries taking part in the investigation, there’s still no clear evidence to determine how or why the 21-year-old disappeared from the west Texas base.

“We have not gotten the help that I think the military should give us, especially since they failed to reach us and make us aware of our son’s absence,” said Patricia Halliday, the soldier’s mother.

Halliday’s whereabouts were unknown for about a month before his parents, Patricia and Rob Halliday, knew their son was missing. For another month, they trusted the Army was using every opportunity to search for him, despite unit leaders believing Halliday deliberately left the base July 24, his mother said.

They then learned the witness who told investigators that he saw Halliday leave had lied, throwing into question exactly when the soldier was last seen.

With their concern growing for their son, the Hallidays raised funds online to travel from their home in Florida to El Paso, the city where Fort Bliss is located. For nearly another month, they have scoured El Paso and crossed the border into nearby Juarez, Mexico, chasing down leads and retracing the last known whereabouts of their son.

“My son is out there,” Patricia Halliday said. “We’ve had sightings that he might be close by. He might be in real trouble.”

Chris Grey, spokesman for Army Criminal Investigation Command, known as CID, said there have been several reported sightings of Halliday in El Paso and several areas in Mexico. Each was fully investigated, but “at this point have met with negative results.”

“Our investigation continues and we have conducted extensive investigative efforts in an effort to locate him,” he wrote in an email. “At this point there is no evidence to suspect foul play, but as in all of our investigations, we are not ruling anything in or out to ensure we look at all possibilities. The goal here is to find Pvt. Halliday and reunite him with his family and the Army.”

The list of agencies supporting the investigation has grown to include the FBI after Rep. Veronica Escobar, D-Texas, sent a letter asking for help on behalf of the Hallidays.

Escobar, who represents the El Paso area, joined the Halliday family at one of their rallies in early October to raise awareness about the missing soldier.

“The congresswoman is dedicated to help find Pvt. Richard Halliday and our office continues to be in touch with the Halliday family,” according to a statement from Escobar’s office.

The U.S. Consulate in Juarez also assists with coordination of Mexican authorities to pursue leads and credible information located outside of the United States, said Maj. Roxy Thompson, spokeswoman for the 32nd Army Air Missile Defense Command, the unit to which Halliday was assigned at Fort Bliss.

Yet the Hallidays said they still do not feel the investigation is being handled appropriately and described instances they believe show how CID has mishandled important information or provided the family information that later proved to be false.

Patricia Halliday said she was initially told her son’s passport was missing from his barracks room, leading them to believe he might have taken a flight out of the country. The passport was later included in an inventory list of items in his room and then returned to her. She also said Army officials told her that Halliday was being involuntarily separated from the Army, but then gave three different reasons why.

At another turn, investigators told her that video footage of her son potentially leaving base July 24 was not available and too labor intensive to sort through. It was later used to prove the witness was lying, she said.

“They had us going down rabbit holes with false information,” Halliday said. “It’s sloppy work.”

With a videographer in tow, the Hallidays have hosted a series of rallies in El Paso and near entrances to the Army base that they said have brought in credible information, as well as a number of dead ends. They plan to continue moving forward this way until they find their son.

“We are going to continue with the rallies because at every rally something happens,” Patricia Halliday said.

With each event, she said she talks to new people about her son and she hopes to inspire someone with information about his disappearance to come forward.

“That’s why we’ve asked the military to grant immunity to any soldier who has information on Richard,” Patricia Halliday said. “If one of them did Richard harm, we grant them immunity, because we want to know what happened to our son.”