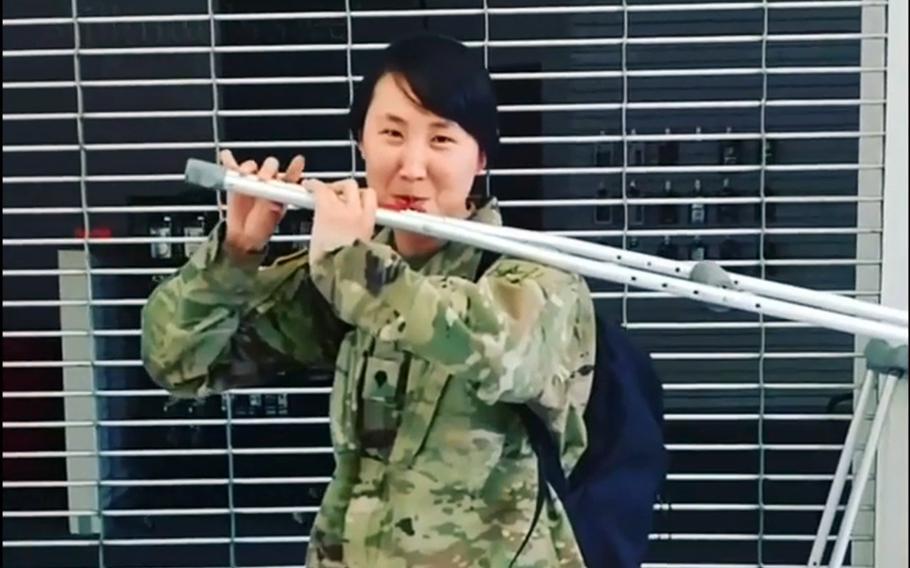 Spc. Jessica Tang has been playing clarinet since she was 9, but with perfect pitch, she can pick up almost any woodwind and make music — including, it turns out, her crutches.

Stuck in holdover status after a severe injury during Army basic training, Tang used duct tape and ingenuity to fashion a mouthpiece that turned a crutch’s adjustable leg segment into a flute.

“I could make one in about three minutes,” Tang said, and she often did so with the plentiful crutches of other trainees at sick call several times a week.

Last month, she posted a video to the social media site Reddit that shows her resting the awkward crutch-flute on her shoulder as she plays a series of compositions. 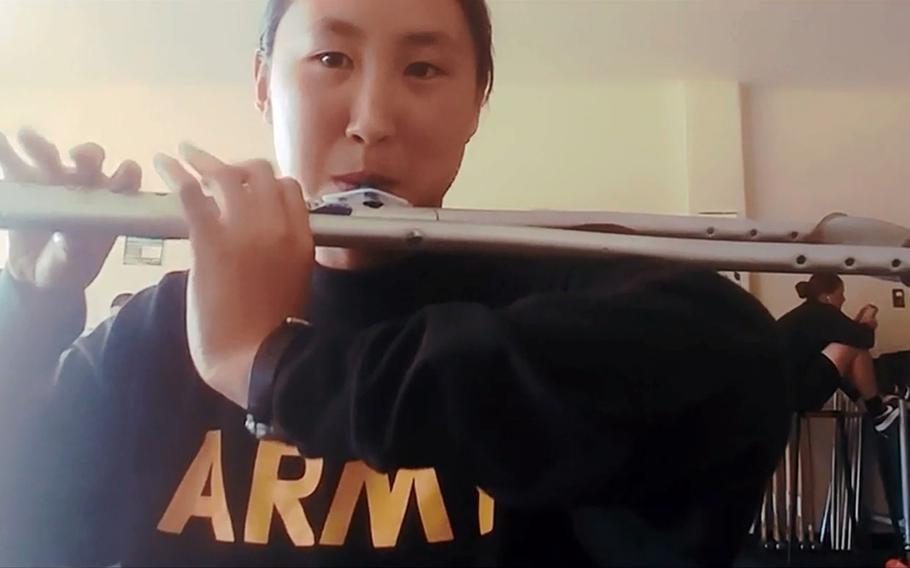 In a screenshot from Reddit, Spc. Jessica Tang plays ‘‘The Army Song’‘ on a crutch she modified to play like a flute after sustaining an injury in training. (Jessica Tang/Reddit)

But the crutch-flute wasn’t just for fun. It helped keep her head and hands tuned up for an important first audition at advanced individual training in the Army School of Music.

“I’m just a really competitive person,” said the 23-year-old, who is now with the Virginia National Guard’s 29th Infantry Division Band in Troutville, in a recent phone interview.

The senior producer of the U.S. Army Band "Pershing’s Own," who happened to be the director of Tang’s high school jazz ensemble, saw her video on a messaging app his military band uses.

“Hey, that’s my student Jessica,” Sgt. Maj. Scott Weinhold recalled saying when he saw the 55-second video. The band plans to feature her on its Instagram.

Weinhold has directed the jazz group at McLean High School in Virginia for about 16 years. He often throws students “curveballs,” such as changing up how a piece is played, to spur adaptability and creativity.

Tang, who writes novels and makes Chinese papercut artworks, is plenty creative, he said. Weinhold also discusses with students the challenges he faced in auditioning for Pershing’s Own — it took him two tries to make it in.

Weinhold “was an absolute titan in my world,” Tang said, crediting his influence and getting to play alongside his Army bandmates during high school as a “huge inspiration” for her becoming a military musician. She’d initially considered it a “pipe dream.”

It wasn’t until her fourth year of college last year that she went for it and shipped to basic training at Fort Leonard Wood, Mo. Then life threw her a curveball.

Days shy of graduating in March 2019, she fell from the Berlin Wall obstacle in a “freak accident” that left her with a broken leg.

“Don’t chapter me,” she recalled telling her drill sergeants right after falling from the wall soldiers scale with a rope. Then she told them she could feel her bones rubbing together.

After surgery and recovery at home, she returned to holdover status for more than a month while waiting to go to the Fitness Training Unit, where soldiers either rehabilitate or await medical discharges.

Because she remained under discipline similar to that of basic training, her initial requests for her clarinet were denied. She feared she’d grow rusty and bomb her audition.

“You do have to stay on the top of your game,” said Weinhold, a competitive triathlete who teaches students about the importance of visualization in training for both music and sports.

“There are ways to practice your musicianship without playing your instrument,” he said, but for many musicians, playing “almost becomes an obsession.”

Musicians in basic training are typically told they’ll be apart from their instruments for a couple of months. Tang, who initially couldn’t do anything without crutches — not even shower — spent a year in the training and rehab pipeline.

She had kept the makeshift instruments a secret for a while, but one day a drill sergeant followed the strains of “The Army Song” down a hallway to a room where Tang was practicing.

After a brief interruption, “he just looks at me and says, ‘Carry on, private,’” she said.

She eventually got her clarinet while in rehab, but believes the modified crutches gave her an edge when she got to band school, where she finished among the top of her class in March.