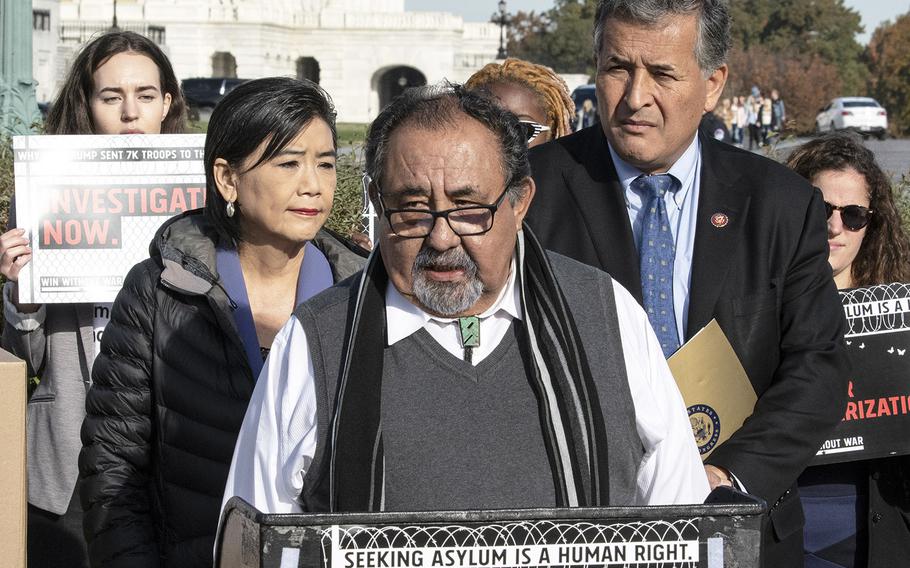 Rep. Raúl M. Grijalva, D-Ariz., speaks at a press conference on the use of U.S. troops at the southern border, November 15, 2019 on Capitol Hill. Behind him are Reps. Judy Chu, D-Calif., and Juan Vargas, D-Calif. (Joe Gromelski/Stars and Stripes)

WASHINGTON — House Democrats on Friday charged President Donald Trump’s decision last year to send thousands of American troops to the U.S. southern border was politically motivated and rooted in racism as they renewed a call for the Pentagon inspector general to probe its legality.

Four representatives, each from southern border states, fingered Stephen Miller, a senior White House policy adviser, as the driving force behind Trump’s controversial border policies, including his calls for building a wall and his decision last October to send thousands of active-duty troops to the U.S.-Mexico border just ahead of the November 2018 mid-term elections. The House members – Arizona’s Raúl M. Grijalva and Californians Barbara Lee, Judy Chu and Juan Vargas – labeled Miller as a white nationalist, citing emails recently leaked to and partially published by the nonprofit Southern Poverty Law Center.

“We question the motivation, the legality and the political optics that are being created by Miller through Trump,” Grijalva said Friday just outside the U.S. Capitol. “Make no mistake this decision by Trump to deploy troops to the border was not only alarming, it was unnecessary and there are serious legal questions that the administration has refused to answer [for] almost a year since the president announced the first deployment.”

The representatives said they and 30 other lawmakers sent a letter to the Pentagon IG in late September requesting an investigation. On Friday, they announced they had delivered 100,000 signatures supporting such a probe to the IG.

The Defense Department’s IG office received the letter requesting the probe in late September and it is “considering the request,” Dwrena Allen, an IG spokeswoman, said Friday.

In October 2018, Trump ordered an active-duty deployment of thousands of troops to the southern border, warning of an impending crisis as a so-called caravan of Central American migrants approached the U.S.-Mexico border. Human rights groups and journalists traveling with the group reported the caravans consisted primarily of children and families seeking asylum.

The next month, Trump said he wanted troops to treat any asylum seekers who threw rocks the same as they would an enemy with a firearm.

“We're not going to put up with that,” Trump said on Nov. 1. "They want to throw rocks at our military, our military fights back. We're going to consider — I told them, ‘Consider it a rifle.’”

Chu on Friday labeled such rhetoric from Trump “phony” and “clearly a lie” designed to stoke fear of immigrants to support his demands for a border wall and the military deployments.

“We have strong reasons to believe [the deployment] is not” legal, the congresswoman said. “Immigrants are not dangerous and refugees who run to border agents in hopes of reaching safety are not a threat. But those facts do not miss Donald Trump’s narrative.”

After initially pushing back against Trump’s inclination to send large formations of armed troops to confront migrants, then-Defense Secretary Jim Mattis approved a deployment of troops in support of short-handed U.S. Customs and Border Protection agents. Those troops were not authorized to conduct law enforcement duties, Mattis said, defending the order as legal. Since then, tens of thousands of troops have cycled through deployments at border locations in Texas, New Mexico, Arizona and California, where they have served several roles, including constructing temporary barriers, shuttling CBP agents via helicopter, conducting surveillance, and providing logistical support to CBP.

American troops have conducted similar missions under deployments ordered by recent presidents including Barack Obama. However, those missions lasted less than one year.

Pentagon officials, some of whom have at times publicly questioned the necessity of the border deployment, have long maintained troops have little, if any, contact with migrants, rarely carry weapons, and have only been authorized to use force for self-defense.

“DOD is providing support to the Department of Homeland Security, and is not performing any law enforcement functions,” Army Lt. Col. Chris Mitchell said Friday. “Those functions are carried out by DHS law enforcement personnel.”

Some 2,900 active-duty troops and another 2,200 National Guard members are deployed now in support of Trump’s border mission, and Defense Secretary Mark Esper has authorized the deployment of up to 5,200 troops to continue through the end of fiscal year 2020.

Lee, the California representative who grew up along the border in El Paso, Texas, vowed to continue to fight against the deployment and Trump’s other immigration policies.

“Make no mistake, Trump has sent these troops to the border for one reason and one reason alone – to terrorize immigrants and refugees,” she said. “Trump is making it clear that immigrants are not welcome in his America. We cannot let that become our America.”