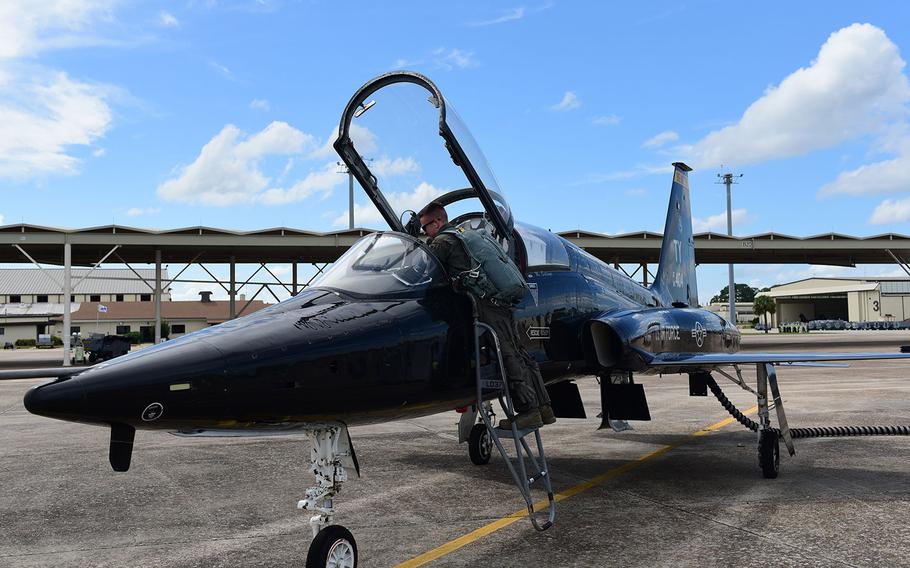 The Category 4 storm, the strongest to ever hit the Florida Panhandle, tore roofing from aircraft hangars and mangled buildings at Tyndall, located just outside Panama City, Fla., according to Air Force officials who reported “widespread catastrophic damage” primarily from winds that exceeded 150 mph.

Hurricane Michael, downgraded to a tropical storm Thursday as it raced into the Carolinas, was blamed for at least two deaths after it left a trail of devastation across north Florida and Georgia. Other military installations in its path seemed to have been spared major devastation, according to several defense officials.

“Team Tyndall, our base took a beating … by now you already know that Tyndall Air Force Base requires extensive cleanup and repairs,” Col. Brian Laidlaw, the 325th Fighter Wing’s commander, said in a message posted Thursday evening to the installation's Facebook page. “I will not recall you and your families until we can guarantee your safety. At this time I can’t tell you how long that will take, but I’m on it. I know this is important to you.” 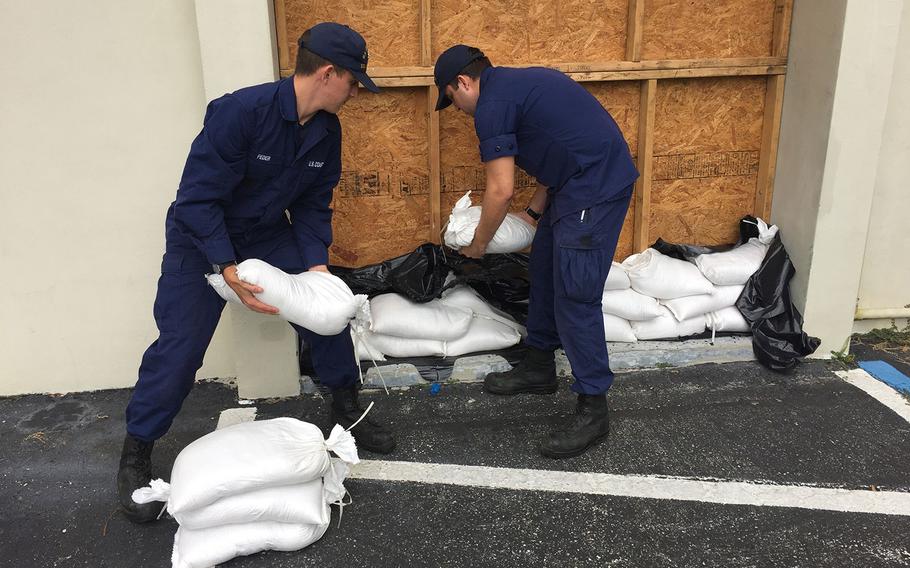 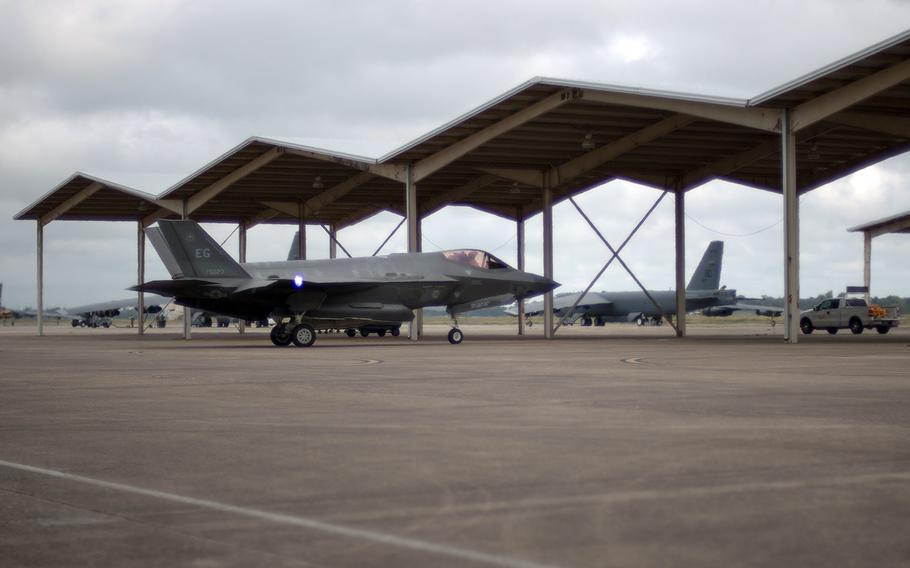 A F-35 Lightning arrives at Barksdale Air Force Base, Louisiana on Oct. 9, 2018 after being evacuated from Eglin Air Force Base, Florida ahead of Hurricane Michael. (Stuart Bright/U.S. Air Force) Rain predictions for Hurricane Michael over the next three days. (Greg Good/TNS) 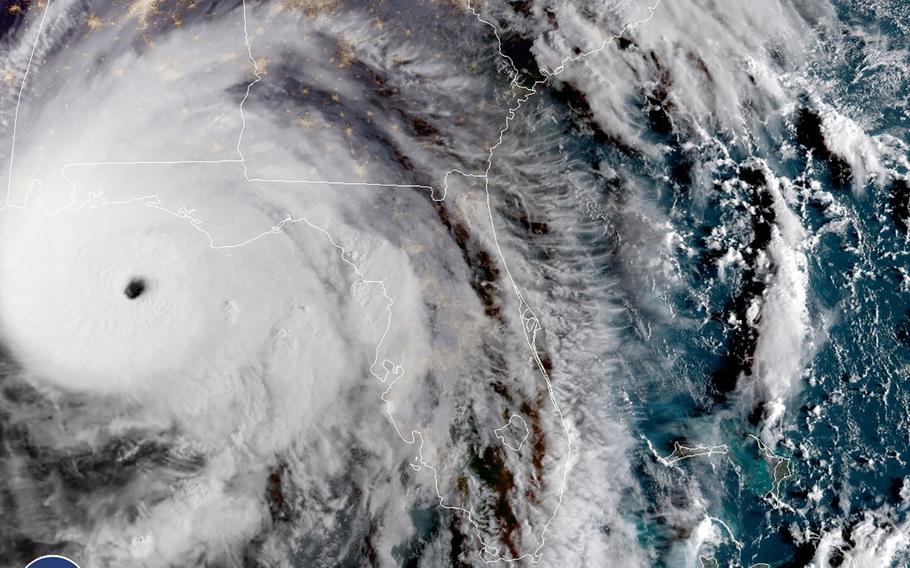 A GOES-16 East Geocolor satellite image of Hurricane Michael shows the storm at approximately 7:27 a.m. EDT on Oct. 10, 2018 in the Gulf of Mexico as it approaches the Florida Panhandle. (U.S. Navy) The eye of Hurricane Michael, as seen from the International Space Station on Wednesday, Oct. 10, 2018. (NASA) 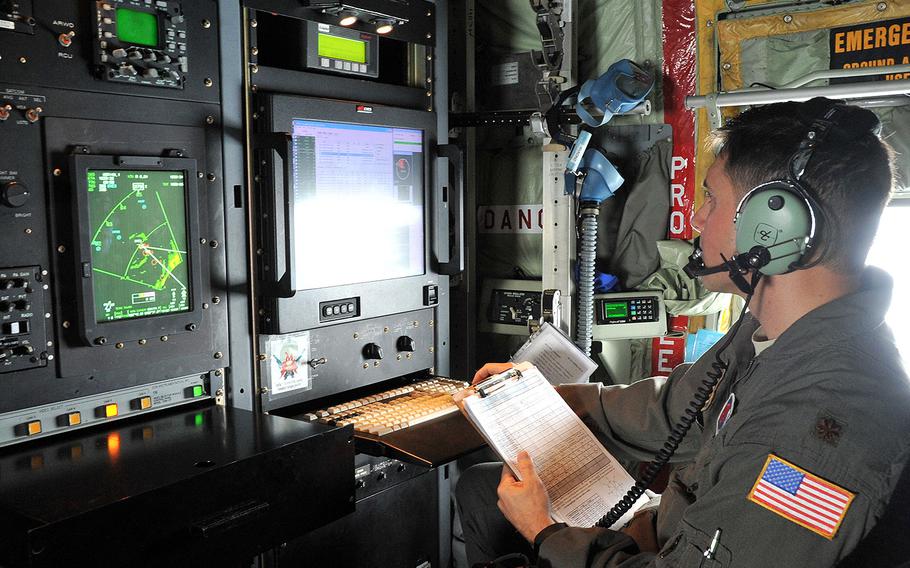 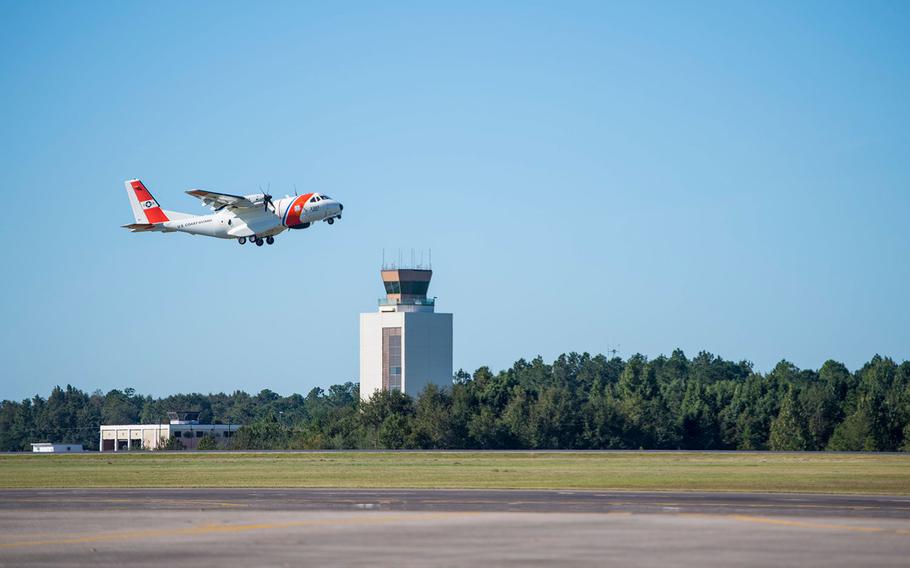 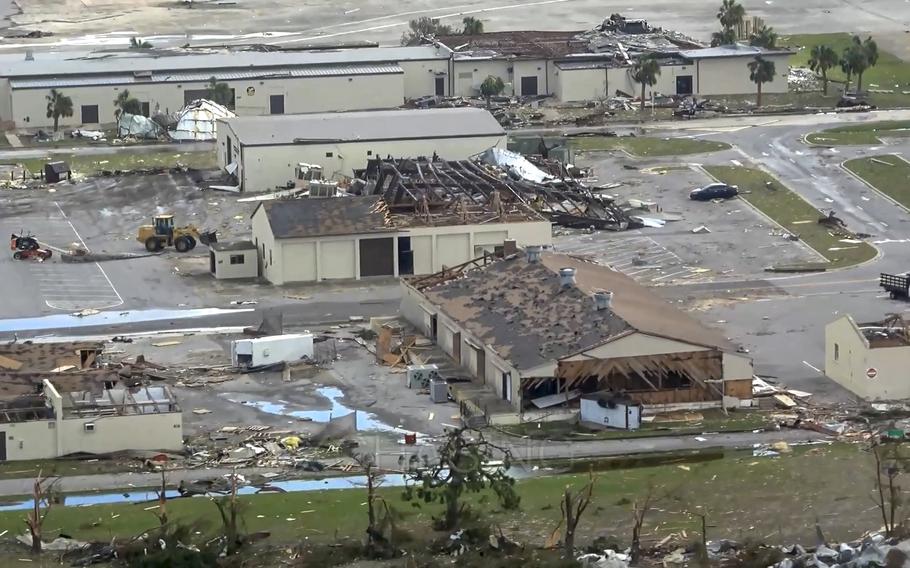 A video screen grab shows some of the destruction caused by Hurricane Michael at Tyndall Air Force Base, Fla. (JQP) 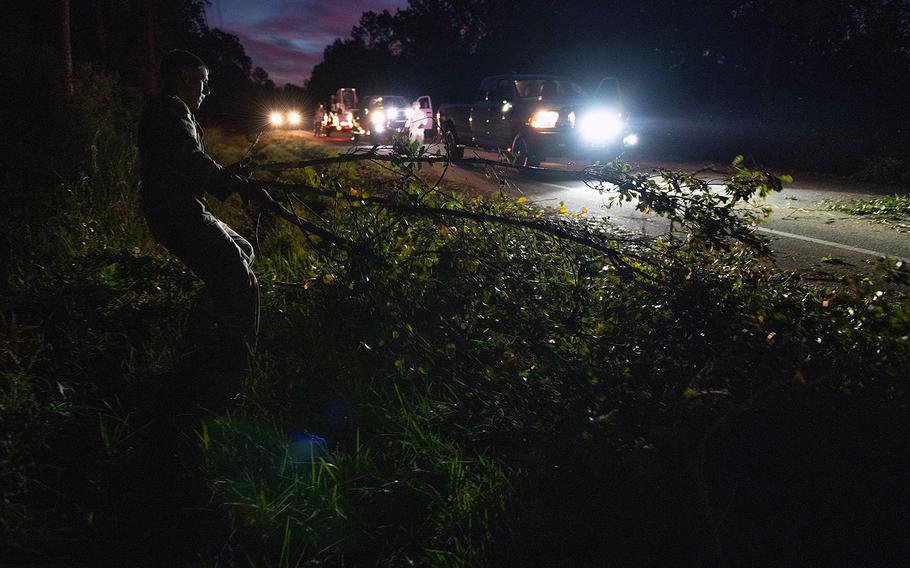 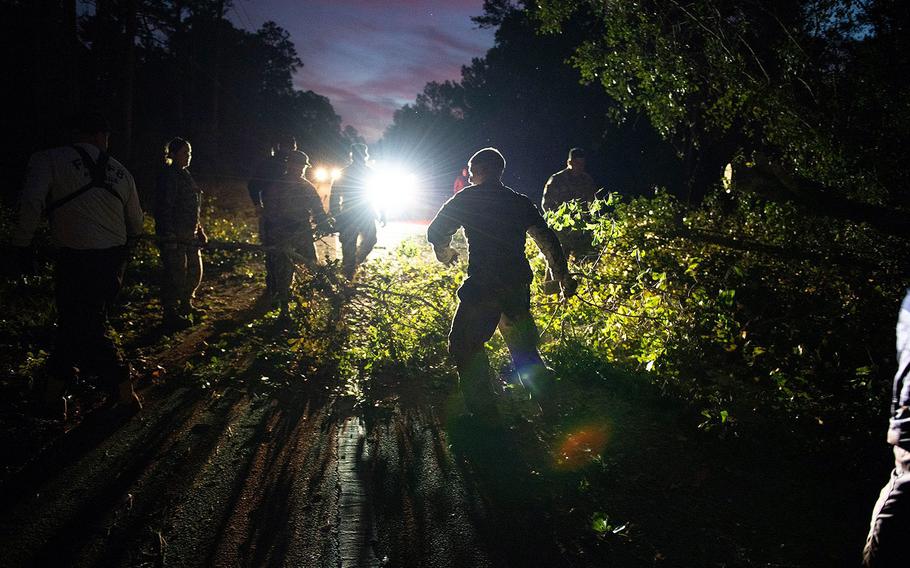 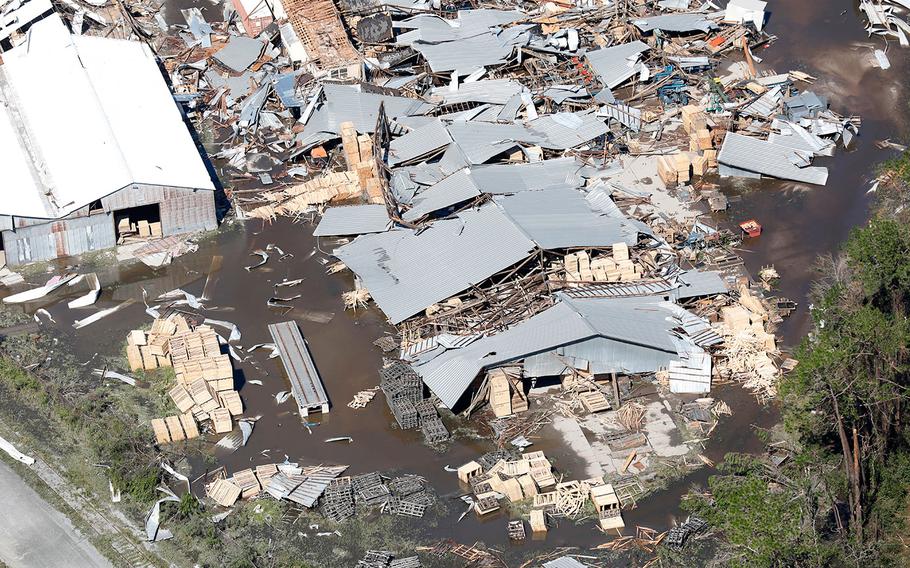 A UH-60 Black Hawk flight crew conducts a flyover of the Florida panhandle in the aftermath of Hurricane Michael as the storm left a swath of destruction across the area near Panama City, Florida, Oct. 11, 2018. (Glenn Fawcett/U.S. Customs and Border Protection) 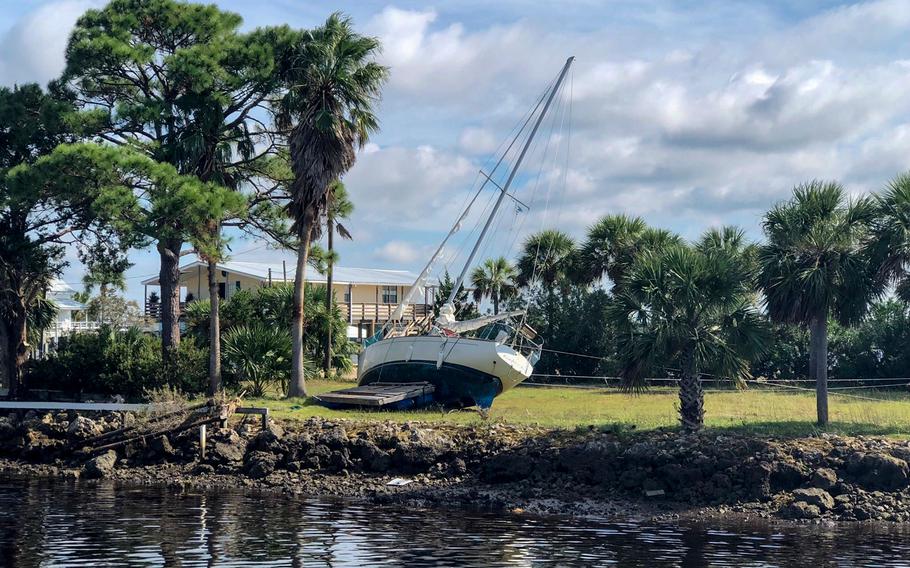 The flight line is devastated, the message said. “Every building has severe damage. Many buildings are a complete loss.”

Other areas that sustained “severe” or “catastrophic” damage include Tyndall Elementary School; the BX and commissary; the two shoppettes; the drone runway; and the Tyndall marina, which was “completely destroyed,” missing all structures and docks.

“Trees and power lines block every road,” the message said. “At this time, power and basic utilities remain out.”

As of Thursday, no injuries were reported on the base, which was under a mandatory evacuation order since Tuesday. All of the operational aircraft assigned to Tyndall were evacuated ahead of the storm to Wright-Patterson Air Force Base in Ohio, Carswell Field in Texas and Barksdale Air Force Base in Louisiana.

“At this point, Tyndall residents and evacuated personnel should remain at their safe location,” Laidlaw wrote in an earlier Facebook message. “We are actively developing plans to reunite families and plan to provide safe passage back to base housing.”

Other military installations in the area were returning to normal operations or expecting to do so, while officials at bases in North Carolina continued to watch the storm’s path.

Eglin Air Force Base and Hurlburt Field, both near Valparaiso, Fla., appeared to avoid the worst of the storm. Eglin officials said Wednesday that the base will remain in limited operations Thursday as it recovers and restores essential services. All other civilian and military personnel were to return to their normal work schedules Friday. Hurlburt officials said the field would be on limited operating status Thursday, and they anticipate normal operations to resume Friday.

Moody Air Force Base near Valdosta, Ga., was closed Thursday except for mission-essential personnel. The base was expected to reopen Friday morning.

Col. Jennifer Short, the commander of the Moody-based 23rd Wing said in a statement that some “recovery operations” were underway Thursday but did not indicate the base received any extensive damage. All of the base’s aircraft were evacuated ahead of the storm.

The Navy warned those who evacuated the base not to return to the area until they were informed it was safe to do so. There are reports of widespread power outages and cell phone service disruptions in the area around the base, a Navy official said. They did not provide an estimate for when power would be restored or when the base might reopen.

Officials at Shaw Air Force Base in South Carolina reported late Thursday afternoon that the storm had passed the base. They reported little damage. Personnel were to report for duty Friday, officials said on Facebook.

The Army’s Fort Bragg in North Carolina was back to normal operations Thursday, but officials were monitoring the storm’s progress, expecting heavy wind and rain.

The Department of Veterans Affairs closed 21 clinics in Florida, Georgia and Alabama on Wednesday before Hurricane Michael hit. Some reopened at noon Thursday, but most were expected to remain closed until at least Friday.

VA officials said the clinic in Marianna, Fla., would be closed until damage could be assessed after the eye of the hurricane hit Wednesday.

“We regret the inconvenience this may cause some of our long-distance travelers, but we will work with you to reschedule,” Tudor said in a message to veterans. “Do please take care of your families, take care of yourselves and be careful on the roads.”

The VA medical center in Dublin, Ga., also in the path of the storm, was open Thursday but was offering limited services while officials evaluated damage.

Stars and Stripes reporter Nikki Wentling contributed to this report.