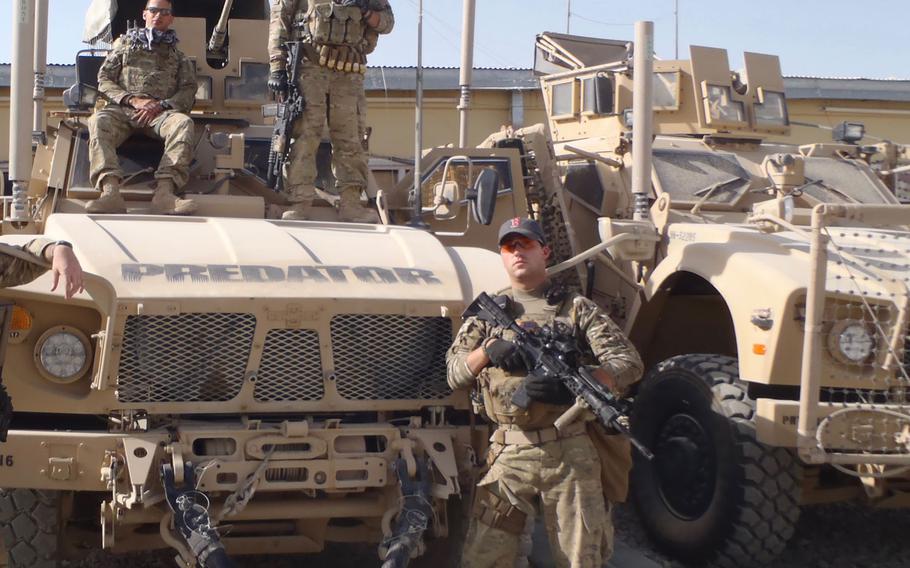 WASHINGTON — Not long ago, Army veteran Dennis Magnasco would respond with frustration when he saw his more liberal friends publicly call for gun reform. They weren’t experts on the weapons that they wanted banned, he thought. They didn’t understand the nuances.

That all changed Oct. 1, 2017, when a shooter used semi-automatic rifles modified with bump-fire stocks to kill 58 people at a music festival in Las Vegas. Magnasco listened to audio of the shooting. The sound of the gunfire transported him back to his time as a combat medic. It took him back to Afghanistan.

“It shook me to my core because it sounded like combat,” Magnasco said. “I had this feeling of, ‘This isn’t right.’ ”

When 17 students and teachers were killed Feb. 14 at Marjory Stoneman Douglas High School in Parkland, Fla., by a 19-year-old using an AR-15 assault-style rifle, Magnasco spoke out. 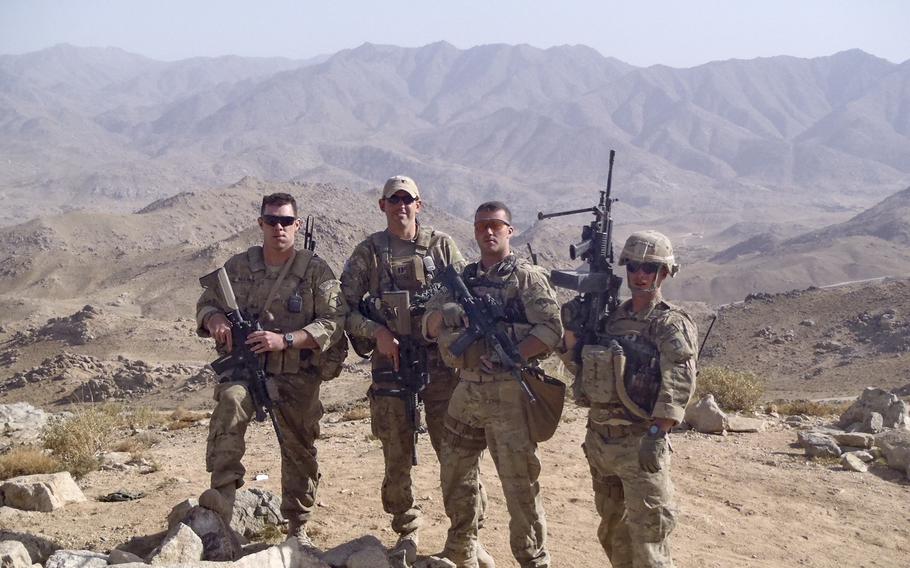 Former Army combat medic Dennis Magnasco, center right, is shown in Afghanistan with other soldiers. Magnasco, who now works in the office of Rep. Seth Moulton, D-Mass., is putting out the call for gun reform along with other combat veterans. (Dennis Magnasco)

He said he’s a combat veteran, a gun owner and a staunch supporter of the Second Amendment. And he’s ready for gun reform.

“I recognize the power of firearms. I’ve seen what they can do,” Magnasco said. “And it makes me sick to know that we have high school kids seeing this in their schools.”

Magnasco tweeted a message to that effect Feb. 18, along with the hashtag #VetsForGunReform and a photo of himself and other soldiers in Afghanistan toting M4 carbine rifles.

His tweet and similar messages shared by veterans during the past week launched a movement that spread from Twitter into commentary in the Washington Post, the New York Times and other publications. One congressman from Florida, Brian Mast — a Republican and combat veteran who lost both legs from a roadside bomb in Kandahar — put out a call to ban future sales of assault rifles, asserting he didn’t fear becoming a “political casualty.”

By Friday, a loose group of veterans formed — some staffers for elected officials, some policymakers and some advocates. They’re urging Congress to reform the access to and sale of firearms, from fixing and expanding background checks to limiting the style of guns sold.

“A lot of us have always been passionate about this issue,” said Andrea Goldstein, a former Navy lieutenant who served with expeditionary forces in multiple war zones. “Some of us are combat veterans. Some of us have seen what firearms can do to people.”

Goldstein served as a troop commander and had a role integrating women into previously all-male units. She now studies gender analysis and human security at the Fletcher School of Law and Diplomacy.

“We want to make our expertise and position very clear, hoping that we can help inform decision-makers,” Goldstein said. “Ultimately, lawmakers have decisions to make, and we hope they make decisions that keep our children safe.”

President Donald Trump held a listening session Wednesday with students and parents of Marjory Stoneman Douglas High School, where he introduced his idea to arm some of the country’s teachers with concealed weapons to fortify schools against future mass killings.

Magnasco described the idea as “preposterous.” Goldstein called it “absurd.”

Servicemembers go through multiple levels of training on firearms, Goldstein said, including marksmanship, proper safety and storage, and urban-attack-scenario training.

“Teachers should be teaching, not out on the rifle range,” she said. “And I absolutely reject the idea that increasing guns in our schools is going to solve the problem.”

“Every time we debunk it, we’re giving it credence as a real policy. I don’t think it’s a real policy,” he said. “It’s not a solution. It’s ridiculous on its face, for a lot of different reasons.”

Lucier first felt compelled to speak about gun reform after the Orlando nightclub shooting in the summer of 2016, when a lone shooter, armed with a pistol and a semi-automatic rifle, killed 49 people.

As a Marine, Lucier led training on M4s and MK-12 special-purpose rifles. He felt especially equipped to explain why access to certain weapons should be restricted.

“Those weapons were extensions of me. I know everything about them and how to use them,” Lucier said. “So, if we’re going to talk about these weapons, who better to than the people who lived and died by them?”

At the time, he teamed up with other veterans and began sending emails to the people who could effect change, but the outcry surrounding the Orlando killings eventually fizzled — and so did their efforts.

Robert Bateman — a military historian, 25-year Army veteran and former Georgetown University professor — first spoke out on the issue in 2013, in an Esquire Magazine post titled, “It’s Time We Talk About Guns.” He acknowledges his stance on guns is more extreme than other veterans who are calling for gun reform. Bateman thinks all automatic and semi-automatic handguns and rifles should be banned.

After the article, he received thousands of pieces of hate mail and more than a dozen death threats.

He and Lucier said the response to the Stoneman Douglas High School shooting — and the subsequent calls for gun reform — feels different.

Students from Stoneman Douglas have organized, emerging as powerful advocates for gun-control laws. They’re speaking at rallies and planning a gun-control event in Washington next month. They questioned the National Rifle Association and Sen. Marco Rubio, R-Fla., on national television Wednesday.

Their outspokenness could be generating some results. On Friday, companies began cutting ties with the NRA after consumers who were angry with the powerful gun lobby urged a boycott. And Trump said he supports limiting the purchase of assault rifles to people who are 21 and older — a stance that defies the NRA.

As the students continue to advocate for legislative change, veterans can amplify their message and can help protect against attempts to discredit them, Lucier said. Soon after the students began speaking out, conspiracies about their being “crisis actors” quickly spread and went viral online, pushed by conspiracy theorists who claim mass shootings are staged to achieve political goals.

“If America sees veterans standing alongside these kids saying, ‘Listen to them,’ that lends weight and a little bit of a shield,” Lucier said.

Working together, Lucier and other veterans involved in #VetsForGunReform hope — this time — that the response doesn’t fizzle.

“This core group of kids is displaying courage and determination — just relentlessly pursuing the issue. The way they’ve spoken up and spoken out does seem different,” Lucier said. “I’m eternally hopeful that we’re going to find solutions to the violence that plagues this country, and every time something like this happens, I’m hopeful again. And that’s the best I can do.”