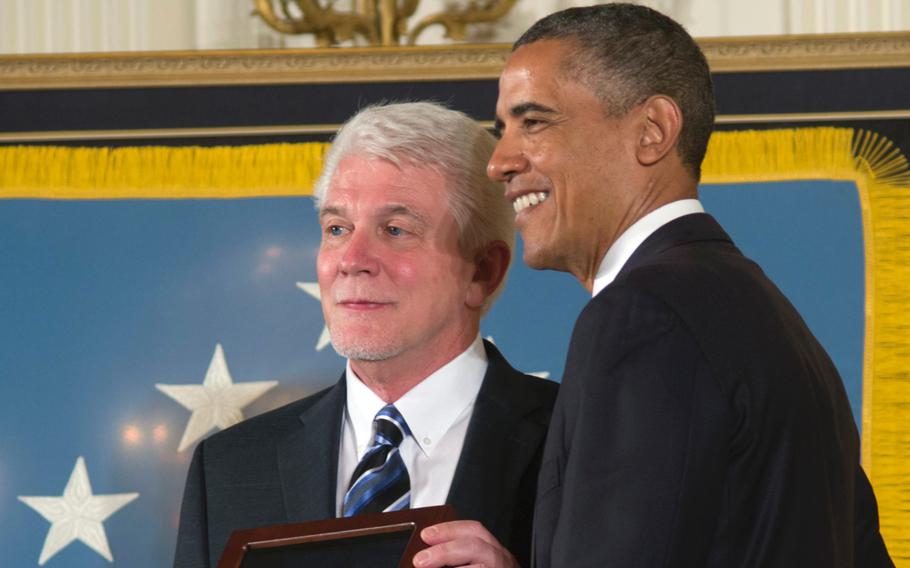 Ray Kapaun poses with President Barack Obama after receiving the Medal of Honor on behalf of his uncle, Father Emil Kapaun. (Stars and Stripes)

WASHINGTON — Hailed as a “shepherd in combat,” an Army chaplain who tended to wounded U.S. troops during the Korean War despite imminent capture was awarded the Medal of Honor on Thursday, more than 60 years after he died as a prisoner of war.

President Barack Obama bestowed the nation’s highest military honor posthumously on Chaplain (Capt.) Emil Kapaun, a Roman Catholic priest whom fellow soldiers say jumped into foxholes and raced into no man’s land to drag the wounded to safety as 20,000 Chinese and North Korean troops bore down on a few thousand U.S. troops during the war in November 1950.

Although a retreat had been ordered, the priest stayed behind to tend the wounded and comfort the dying, and continued to make his rounds even as hand-to-hand combat ensued. He convinced an injured Chinese officer to negotiate the safe surrender of American forces. And then, seeing a Chinese soldier about to execute a wounded GI, Kapaun calmly pushed aside the enemy and carried the U.S. soldier away.

“This is the valor we honor today,” Obama said, “an American soldier who didn’t fire a gun, but who wielded the mightiest weapon of all: a love for his brothers so pure that he is willing to die so that they might live.” 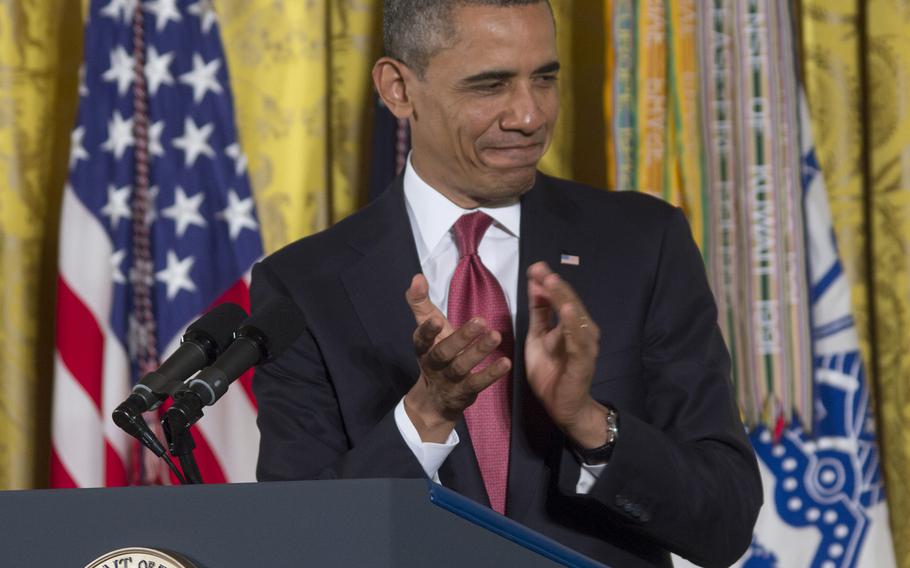 President Barack Obama leads the applause for veterans who were imprisoned in Korea with Father Emil Kapaun during a Medal of Honor ceremony for Kapaun at the White House on April 11, 2013. (Stars and Stripes)

Kapaun’s nephew, Ray Kapaun, received the medal at a White House ceremony attended by some extended family members and fellow soldiers whom he treated during the war.

"I don't think the enormity of what occurred today will actually hit me until my wife and I are heading home from this experience," Ray Kapaun said afterward. "A country boy from a small town in Kansas just received the nation's highest award for valor. That boy was my uncle."

The medal will be given to Emil Kapaun’s hometown of Pilsen, Kan., where townspeople packed the parish for the father’s first Mass.

“It was the people of Pilsen who would not let the story of a hometown hero fade into the background,” Ray Kapaun, 56, said. “This is why so many others will know the Father Emil story. It is a symbol of humble beginnings and how necessity does not dictate your destiny."

Emil Kapaun’s heroics didn’t end on the frontlines in Unsan.

He carried the wounded GI, Sgt. Herbert Miller, for four miles as the North Koreans marched the captured Americans more than 80 miles to a prison camp. He picked up soldiers who stumbled and encouraged those who had almost given up to keep walking, for fear that they would be shot.

At the camp, in freezing temperatures, Kapaun offered fellow soldiers his own clothes. He somehow snuck past guards to forage in the fields for extra food, convinced the POWs to share, boiled them clean water as dysentery ravaged them, washed their clothes and cleansed their wounds, Obama said. 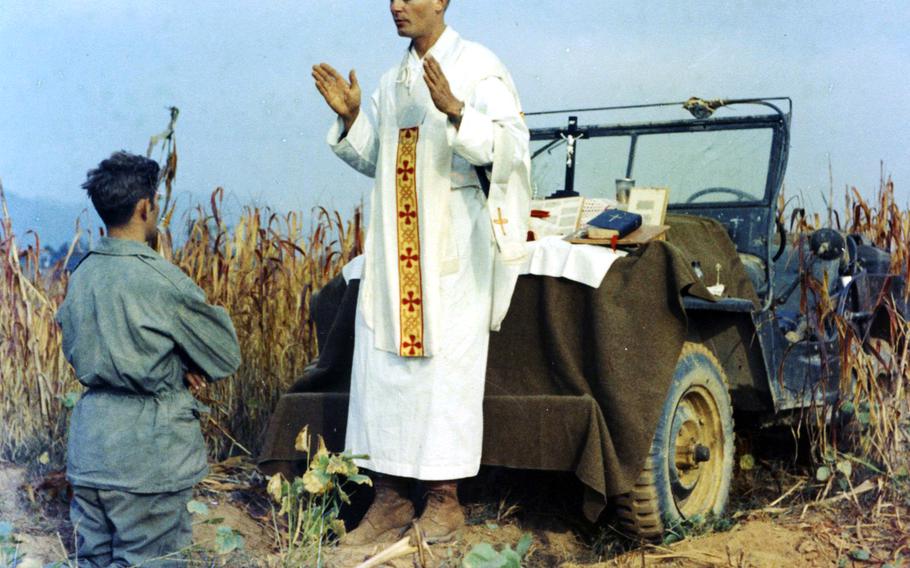 In this photo taken October 7, 1950, less than a month before he was taken prisoner, Kapaun celebrates Mass using the hood of his jeep as an altar. Kneeling is Kapaun's assistant, Patrick J. Schuler, who was with him the night he was captured. (The Wichita Eagle/TNS)

“Without him, a lot of fellows would have never made it,” Miller told the Stars and Stripes in an earlier interview.

The chaplain would lead the POWs in prayer at night, saying the rosary and administering sacraments, and even led Easter services - ultimately keeping hope alive for the captured American troops that they would be rescued.

“That faith, that they might be delivered from evil, that they could make it home, was perhaps the greatest gift to those men,” Obama said. “That even amidst such hardship and despair, there could be home ... that even in such hell, there could be a touch of the divine.” 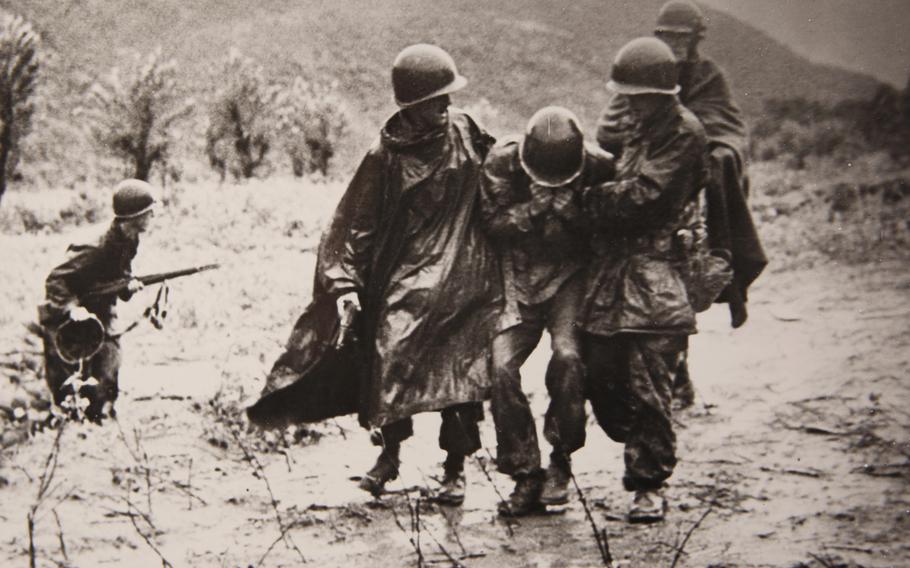 An iconic photograph of Father Emil Kapaun, right, shows him and Capt. Jerome A. Dolan, left, a medical officer, carrying an exhausted GI off a battlefield in Korea, early in the war. (Catholic Diocese of Wichita)

Prison guards eventually sent Emil Kapaun to what his comrades called a “death house” when he fell ill. He was 35 when he died on May 23, 1951, after suffering from a blood clot in his leg, dysentery and pneumonia. He was buried in a mass grave, his remains still unrecovered.

The Roman Catholic Church has declared Emil Kapaun a Servant of God, the first step for possible sainthood.

“He never lost his faith. In fact, it only grew stronger,” Obama said. “He offered three simple words: ‘God bless you.’ ... He could, just for a moment, turn a mud hut into a cathedral.”