Netanyahu assured US he'd curb the far right, but has he already lost control? 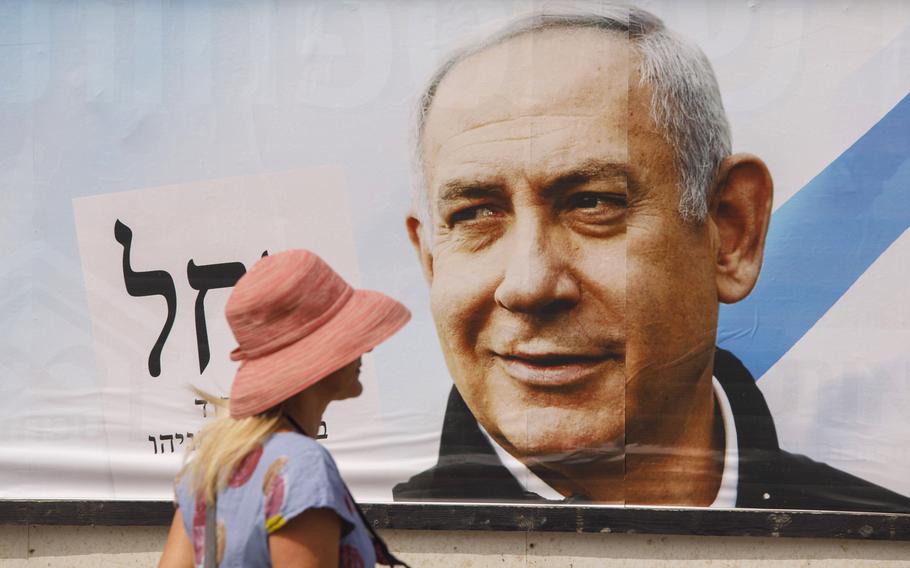 A pedestrian passes an election campaign billboard for Benjamin Netanyahu, Israel’s prime minister and the leader of the Likud party, in Tel Aviv, Israel, on March 15, 2021. (Kobi Wolf/Bloomberg)

TEL AVIV — Immediately after the November election that elevated a once-fringe bloc of far-right politicians to Israel's top seats of power, Prime Minister Benjamin Netanyahu embarked on an American media blitz, aimed at reassuring his country's most important ally.

"My hands are firmly on the steering wheel," he said in interview after interview.

But just three weeks into his term, critics say Netanyahu's far-right coalition has already begun to veer off course — swiftly advancing measures that seek to weaken Israel's judiciary system and eliminate any remaining prospects for a two-state solution to the Israeli-Palestinian conflict. The barrage of initiatives contrast sharply with Netanyahu's calculated and measured style, and are proof, said Alon Pinkas, a former Israeli consul in New York, that he has lost control.

"Netanyahu's partners know he's the weakest he's ever been, so they're holding him hostage," said Pinkas, who has fielded calls from U.S. senators and representatives struggling to find strategies for dealing with the new government, the most far-right and religiously conservative in Israeli history.

Netanyahu, Israel's longest-serving leader, "no longer has legitimacy; if this government falls apart, there's a chance he'll go to jail," said Yoav Fromer, head of Tel Aviv University's Center for the Study of the United States, referring to the ongoing trial against Netanyahu, who has been indicted in three separate corruption cases. The trial, Fromer said, has granted outsize leverage to Netanyahu's extremist religious partners, who have promised to help save him from prosecution in exchange for the freedom to pursue their own agenda.

The unofficial quid pro quo has already translated into substantive concessions to Israel's far right and revealed the limits of U.S. influence. U.S. officials expressed their discomfort to Netanyahu over the demands by Bezalel Smotrich, head of the ultranationalist Religious Zionism bloc, during coalition negotiations, according to Israeli media. But Smotrich and his allies were appointed to critical, and sensitive, positions in Israel's security establishment and overseeing civilian affairs in the West Bank — the disputed territory that members of the radical bloc, in defiance of the United States, have openly vowed to annex.

In public, Washington has reiterated its commitment to its "shared values" with Israel. But it is also quietly recalibrating its position, communicating to Netanyahu that he will be held responsible for undermining those values — and warning that his ambitions to curb Iran and normalize relations with Saudi Arabia could be affected.

"Every minute I'm talking about problems with the Temple Mount/Haram al-Sharif, the [West Bank] outposts, on calls with the White House is a minute lost when we could be talking about other things," he added, referring to the Jerusalem site that is sacred to both Muslims and Jews and has often been a flash point in the Israeli-Palestinian conflict.

Earlier this month, Itamar Ben Gvir, the far-right national security minister, made a controversial visit to the site. The United States was the first country to publicly condemn the move, saying that changes to the status quo would be "unacceptable."

On Jan. 2, the night before Ben Gvir's visit, as Hamas called on Palestinian youth to "mobilize," Netanyahu convinced Ben Gvir to delay his tour, according to Israeli media. But his hard-line base demanded that he resist "surrendering to terrorism" and at 7 a.m. the following morning, flanked by security officers, Ben Gvir arrived at the Temple Mount.

"This is what happens when a weak prime minister is compelled to entrust the most irresponsible person in the Middle East with responsibility over the most combustible place in the Middle East," opposition leader Yair Lapid tweeted in response to the incident.

Netanyahu's far-right ministers are staunch ideologues with fervent constituencies, including many messianic Jews who believe that peace in Israel can only be achieved through all-out war.

Tzvika Foghel, a lawmaker from Ben Gvir's Jewish Power party, told Army Radio that even if Ben Gvir's visit resulted in Hamas rocket fire that killed Israelis, "then, yes, it would be worth it, because it would be the last war, and after that we can sit back and raise doves and all the other beautiful birds that exist."

At an emergency United Nations meeting on Jan. 5, American representative Robert A. Wood said the United States was "concerned by any unilateral acts that exacerbate tensions or undermine the viability of a two-state solution."

The United States has vetoed more than 50 U.N. resolutions against Israel over the years — blocking tribunals, sanctions and boycotts over its occupation of Palestinian territory in the West Bank and its wars in Gaza — arguing that Israel's robust justice system is capable of holding its military accountable.

But in the past week, Netanyahu's government has also rapidly advanced a judicial overhaul aimed at weakening the Supreme Court, and potentially allowing the prime minister and his allies to hand-pick the judges presiding over his corruption trial. The ploy, legal experts warn, could save Netanyahu in the short term, but ultimately harm Israel by undermining the ability of the United States to defend it in the international arena.

That defense mechanism is critical, he said, at a time when international condemnation of Israel is accelerating. On Monday, more than 90 U.N. member states expressed "deep concern" over Israeli sanctions against the Palestinian Authority — including the freezing of construction and the withholding of tens of millions of dollars in tax revenue — after the PA sought support from the International Court of Justice in The Hague.

The prospect of a fracturing American diplomatic shield also coincides with a surging settler movement, emboldened by the government's promises to authorize dozens of illegal outposts and allocate $2 billion to upgrade roads and infrastructure on land that Palestinians envision as part of their future state.

"We should, as policy, send our people to [all of the West Bank]. This is the land of Israel," Ben Gvir said last year.

That could complicate U.S. aid to Israel — including $3.8 billion in annual security assistance — which will be key to Netanyahu's broader agenda of curbing Iran's nuclear program and normalizing relations with Saudi Arabia. Israel and Riyadh have covertly collaborated to destabilize Iran in recent years, but formal ties would "expand the circle of peace beyond our wildest dreams," Netanyahu told the Washington Examiner last month.

Nides, the U.S. ambassador, said the United States has been working to remind Netanyahu that changes to the status quo at Jerusalem holy sites and government support of West Bank settlements undercut his regional ambitions. Washington remains committed to keeping the "vision" of the two-state solution alive, Nides said, but he acknowledged that there is a lack of political will and that the Israeli-Palestinian conflict is escalating.

"We will push back when we need to push back," he said.

"The results will not bode well for anyone," he said.

The Washington Post's Hazem Balousha in Gaza City contributed to this report.