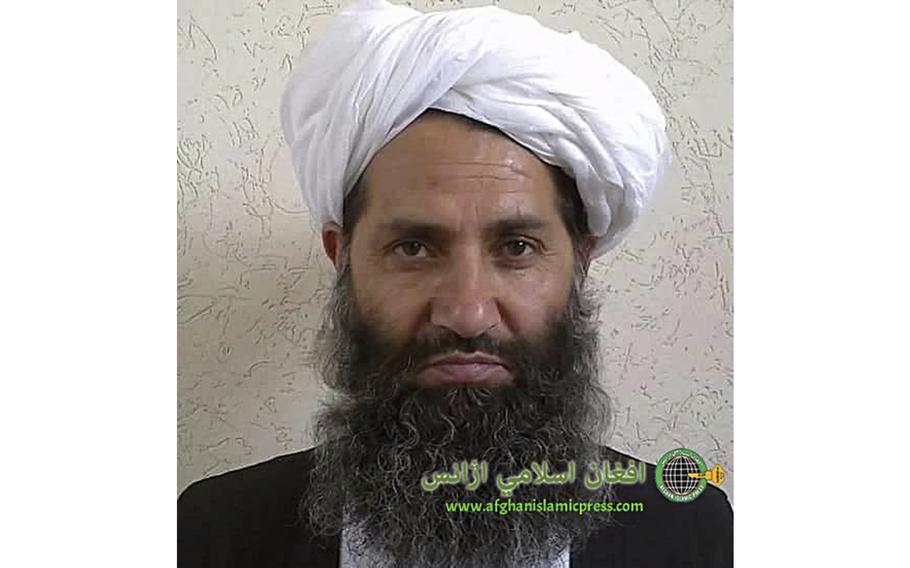 Haibatullah Akhundzada poses for a portrait in this undated photo from an unknown location. Akhundzada, the Taliban’s supreme leader, and his fellow ultraconservatives based in Kandahar are cracking down on social freedoms as their movement transitions from primarily waging an insurgency to governing a large, diverse country. (Afghan Islamic Press)

ISLAMABAD, Pakistan — Taliban hard-liners are consolidating their control over Afghanistan with the recent bans on women’s education and work, overriding the wishes of some Taliban officials in the capital, Kabul, and at the provincial level, according to government and aid officials.

The Taliban’s supreme leader, Haibatullah Akhundzada, and his fellow ultraconservatives based in Afghanistan’s second city of Kandahar are cracking down on social freedoms as their movement transitions from primarily waging an insurgency to governing a large, diverse country.

The draconian restrictions issued by Akhundzada last month, banning women from attending universities and from working for international organizations, demonstrated that real authority continues to reside in Kandahar rather than in Kabul, home to Taliban ministries and the group’s acting prime minister.

“This is [the supreme leader] taking more control” over national policy and how his directives are followed in Kabul and elsewhere, said an aid official in Kabul with direct knowledge of negotiations within Taliban leadership. The official, like others interviewed for this article, spoke on the condition of anonymity because they were not authorized to discuss ongoing negotiations or internal policy disagreements.

Akhundzada, an ultraconservative Muslim cleric, has led the Taliban since 2016, rarely appearing in public but increasingly meeting in private with local religious officials. Despite having appointed Taliban ministers and governors after the collapse of Afghanistan’s previous government in 2021, Akhundzada retains the final say on all major national policy decisions.

“At first, we were just sent guidelines” from the supreme leader for formulating policy, said one Taliban official in Kabul at the ministry level. “Now for anything important, we need to get Kandahar’s approval,” he said.

In other cases, rulings come directly from Kandahar without consultation with Kabul, though the decisions are formally announced by government ministries, he said.

“Not everyone agrees” with the recent rulings, the official said, referring to Taliban members in Kabul and at the provincial level. But Kandahar is demanding more oversight of policy, and ministers who lack a direct line to Kandahar are increasingly sidelined, he said. Two other Taliban officials confirmed his description of the recent shifts in the group’s policymaking.

The acting education minister was ousted in September after Akhundzada replaced him with the head of Kandahar’s provincial council as part of a wider reshuffle. The reshuffle also saw Taliban members from the supreme leader’s inner circle appointed to senior political and security positions at the provincial level.

“The leaders, ministers and members of the cabinet of the Islamic Emirate of Afghanistan make policies under the guidance” of the supreme leader, and his guidance is entirely based on Islamic law, Ahmadi said.

The recent rulings appeal to many members of the Taliban’s base, but they also threaten to expose critical divisions within the movement and test its ability to maintain unity.

For years, while at war with U.S. and NATO forces, the Taliban maintained a degree of diversity within its network of alliances. The movement’s more conservative wing is largely dominant in Afghanistan’s mostly rural Pashtun south, but commanders in the east and north were granted some autonomy in how they carried out the Taliban’s strict interpretation of Islamic law. In some districts under Taliban control, for instance, women were allowed to travel to nearby cities to attend university.

With the war over, it’s unclear whether the group is prepared to allow a similar level of autonomy within its leadership. While some cabinet members in Kabul and Taliban leaders at the provincial level disagree with the recent restrictions on the rights of women, these figures have not publicly voiced their dissent, fearing it would be interpreted as an affront to Islamic rule and undermine national unity, according to two Taliban officials in Kabul.

Some Taliban officials have suggested that rulings restricting women’s education and ability to work are temporary and could be adjusted once stricter gender segregation is introduced and if conservative dress is observed. But other officials have come out in strong support of the decrees.

The acting minister of higher education, speaking on Afghan television, accused women in universities of failing to observe a strict Islamic dress code and instead wearing clothing “women wear to go to a wedding.” And a Taliban spokesman in Qatar said that Afghan women do not need to work and that “if the international community wants to help women, they should deliver it to their husbands who will share with their wives.”

The restrictions have also sparked fierce international criticism and warnings from aid groups that any reduction in the level of humanitarian assistance could leave millions without the ability to feed their families.

“A part of the Taliban leadership appears either not to comprehend the chilling consequences of these latest decisions or they are indifferent to the suffering of millions of ordinary Afghans,” said Markus Potzel, acting head of the U.N. mission in Afghanistan. Potzel did not specify what part of Taliban leadership he was referring to but warned that some Taliban leaders also appear “prepared to take the country further into isolation away from the community of nations.”

Since taking control of Afghanistan, the Taliban have steadily cracked down on women’s rights. The majority of female government employees were immediately banned from coming to work in 2021.

In March, a surprise last-minute ruling banned girls from secondary school education. In May, an order heavily restricted how women dress in public, and in November women were banned from public parks and gyms.

Despite many of the bans triggering global outrage and protests across Afghanistan, senior Taliban leadership has so far refused to overturn any of the decisions, defending them as internal issues that should free of outside interference.

Ahmadi, the deputy Taliban spokesman, said that the rulings are necessary for the Taliban to establish nationwide Islamic law and that the international community’s “responsibility” is to continue to help the Afghan people.

During the first months of Taliban rule, security was the group’s primary concern amid fears of a resurgence by the Islamic State group and a simmering resistance movement in the northeastern province of Panjshir. Now, more than a year later, Ahmadi said the group is also focusing on development and social issues. “These are the needs of the people, and they have expectations from us,” he said.

The Washington Post’s Haq Nawaz Khan in Peshawar, Pakistan, contributed to this report.