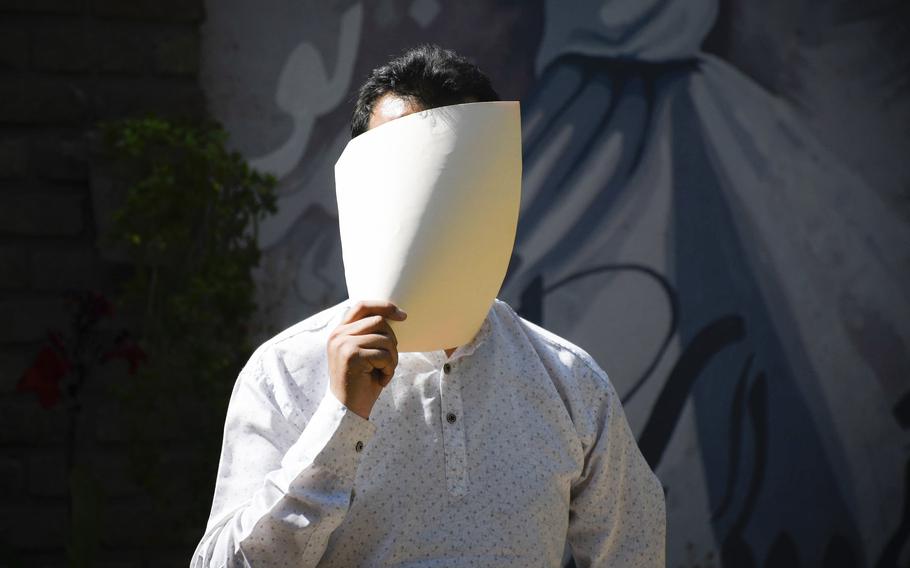 An Afghan interpreter for U.S. forces hides his face due to threats against his life before he left Afghanistan in 2020 on a Special Immigrant Visa. The U.S. government must come up with a new plan to fix delays in the SIV program, which allows interpreters from Iraq and Afghanistan to resettle in the United States, after a federal judge rejected a government request to cancel the plan. (J.P. Lawrence / Stars and Stripes)

KABUL — The Taliban regime, stepping up the pace and severity of Islamic punishments, carried out its first public execution this week since taking power 15 months ago. A convicted murderer was shot Wednesday, followed a day later by the lashing of 27 men and women in a soccer stadium on charges that included adultery, theft, drug use and running away from home.

The man put to death in western Farah province was not identified, but officials said he was accused of murder five years ago and found guilty after three recent court hearings. Under the Islamic legal tenet of “qisas,” which allows personal retribution for crimes, the father of the murder victim carried out the death sentence as a crowd watched, shooting the killer three times.

The grim episode drew immediate international condemnation. A statement from the U.N. Office of Human Rights in Geneva called it “deeply disturbing” and declared that all public executions “constitute a form of cruel, unhuman or degrading punishment.” The agency urged Afghan authorities to place an “immediate moratorium” on executions and ban the death penalty.

Until last month, the strict religious regime, which has been seeking international recognition and is desperate for economic support, refrained from administering such brutal forms of punishment, which were a common sight during its first stint in power from 1996 to 2001.

But on Nov. 23, the Taliban proudly inaugurated the comeback of this controversial practice by inviting prominent Afghans and local citizens to witness the whipping of nine men and three women for various offenses in a sports stadium in Logar province, an hour’s drive south of the capital. Invitations were sent via social media from the Logar governor’s office to “honorable scholars, mujahideen, elders, tribal leaders and local people.”

Since then, similar group punishments, ordered by Taliban courts, have been carried out publicly in scattered rural provinces including Parwan, Farah and Paktia. Media reports from different locations have shown images of crowds watching while men with whips struck seated women covered with burqas or men held facedown on the ground. Important officials often travel to observe the proceedings.

Taliban spokesmen have repeatedly defended these actions as proper and required under sharia law, and they have accused the international community of disrespecting their religion and laws. In a tweet Thursday, Zabihullah Mujahid, the chief Taliban spokesman, said that foreign critics of Islamic punishments either have “insufficient information” about Islam or “do not respect the beliefs, laws and internal issues of Muslims, which is an interference in internal affairs.” He also said that “even America and Europe have the death penalty.”

Other Afghan officials, clerics and Taliban supporters publicly welcomed the revival of sharia-based punishments, some in comments on social media. They described the punishments as an important part of the system the Taliban had fought for and expressed hope that they would spread further.

“All praise to Allah,” posted Wakil Ahmad Mukhlis, a commenter on Twitter. “May Allah establish a transparent Islamic system like Afghanistan all over the world.” In another tweet, Abdul Salaam Zaeef, a former senior Taliban official who spent many years in custody at the U.S. military’s Guantánamo Bay detention camp, expressed the hope that sharia justice “will be regularly implemented in the country.”

Several others posted cautionary messages, saying sharia laws must be carried out fairly and not discriminate against the poor. During the first period of Taliban rule, crime rates fell to near-zero as harsh punishments became common. But today, with the country in dire economic straits and many people jobless, petty thievery and robbery have become widespread.

There was little public indication of how local residents reacted to watching the recent lashings or Wednesday’s execution. Media images, some of them blurry, showed crowds of grim-faced men gathered in soccer fields and public plazas at the urging of local authorities. In most cases, though, no media coverage was allowed.

Officials in the provinces where the punishments were carried out emphasized that the procedures followed the law and were ordered by Taliban courts, with the guilty given between 25 and 39 lashes. They also provided lists of the offenses that indicated an emphasis on women’s moral behavior as well as crimes such as robbery.

Obaidullah Ameenzada, the governor of Parwan province, said nine of the people who received lashings there Thursday were women. Some of them were “engaged in prostitution,” had “illegal relations” or were convicted of “escaping from home,” he said.

In Afghanistan, the charge of escaping from home has often been leveled against wives or daughters fleeing domestic abuse, and those caught are often jailed or forcibly sent home. Before the Taliban returned to power, foreign charities and local groups set up shelters for runaway women and girls in Kabul and other cities, but most have now been closed.

Another Facebook post showed news images of two men with ties to the current regime who had been accused of misdeeds. One of them, the brother of a passport department official, was allegedly caught in a hotel with dancing girls and accused of selling passports for hundreds of dollars.

“Will these people get punished?” demanded the commenter, identified only as Maryam.