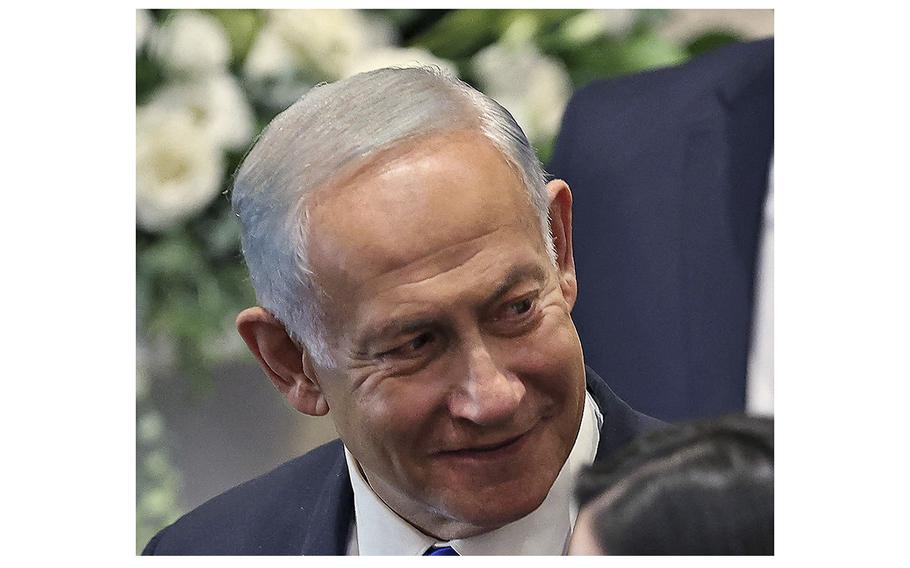 Incoming Israeli Prime Minister Benjamin Netanyahu attends the swearing in ceremony of the new Israeli government at the Knesset in Jerusalem on Nov. 15, 2022. (Abir Sultan/Pool/AFP/Getty Images/TNS)

WASHINGTON (Tribune News Service) — The Biden administration is grappling with how to deal with a new Israeli government that may stand in the way of core U.S. goals for the Middle East.

The new government will be led by Benjamin Netanyahu, Israel's longest serving prime minister, who was ousted from the job just a year ago and is on trial for corruption. To regain the position, Netanyahu formed an alliance with controversial political figures known for their extreme anti-Arab views, likely dooming any peace deal with Palestinians.

Dealing with the Netanyahu-led government will pose major challenges for the Biden administration, which desires a resolution to the Israeli-Palestinian conflict and broader acceptance of Israel in the Arab world.

Republicans in the U.S. who are eager to cast themselves as true friends of Israel are sure to question any Biden administration criticism of the new government.

Netanyahu and the GOP have grown closer over the past decade, undermining decades of bipartisan support for Israel.

In 2015, Netanyahu, whom congressional Republicans had invited to address a joint session of Congress, used the speech to criticize President Barack Obama's nuclear deal with Iran. Former President Donald Trump moved the U.S. Embassy from Tel Aviv to Jerusalem and recognized the Israeli annexation of the Golan Heights, delighting Netanyahu. Just this week, Netanyahu delivered a speech to the Republican Jewish Coalition, a partisan group.

Netanyahu and President Joe Biden have both said that U.S. support for Israel should remain bipartisan.

Netanyahu's new allies may make that difficult, however. Some U.S. officials have already privately indicated they will not meet with Itamar Ben-Gvir and Bezazel Smotrich, two likely members of Netanyahu's government.

Ben-Gvir and Smotrich advocate recognizing illegal Israeli settlements in the West Bank, where most Palestinians live, and eventually annexing most or all of that territory. They oppose a separate Palestinian state. Netanyahu needs their support to cement a majority in the Israeli Knesset, or parliament. Their support could also help him pass a law that would allow him to dodge his corruption trial.

The two men have also called for a far harsher crackdown on Palestinian militants and their supporters, including strict curfews in Palestinian villages, mass deportations and targeted killings of terrorism suspects. They have advocated making it easier for Israeli security forces to use live ammunition against Palestinian protesters who throw stones.

Ben-Gvir has also expressed affinity for the late ultra-nationalist rabbi Meir Kahane, whose ideology the Anti-Defamation League has described as reflecting "racism, violence and political extremism" and whose organization until recently was listed as a terrorist group by the U.S. government.

For years, Ben-Gvir had a poster of Baruch Goldstein, an Israeli American terrorist and Kahane disciple who murdered 29 Muslim worshippers in Hebron in 1994, hanging in his home, according to Israeli media. In 2007, an Israeli court convicted Ben-Gvir of incitement to racist violence and support for a terrorist organization.

Ben-Gvir and Smotrich want to head the ministries of public security and defense, respectively, portfolios that have the closest contact with U.S. officials. On Friday, Netanyahu's Likud party and Ben-Gvir's Jewish Power party announced an agreement for Ben-Gvir to become security minister.

"This country is a democracy that elected a leadership and I intend to work with them," the U.S. ambassador to Israel, Thomas Nides, said in an interview with Israeli media, adding quickly: "That said, we have to stand up for the things that we believe in, that's what American values are about. We have a very strong ally in the state of Israel, but there will be times when we will articulate where we believe our differences are."

Nides and other U.S. officials have stated that the two countries' points of disagreement include expansion of Israeli settlements in the occupied West Bank and the possible annexation of the territory.

"The administration will have to decide what the real red lines are," said Michael Koplow, a senior analyst with the Israel Policy Forum, a U.S.-based pro-Israel organization that advocates the two-state solution. "This will test U.S. boundaries on all fronts."

Negotiations to form the government are underway and could take days or even weeks. A fair amount of horse-trading is part of the process, so it remains unclear which politicians will assume which posts. Netanyahu offered Smotrich the Finance Ministry instead of Defense, according to Israeli media, but Smotrich has so far given no indication he will budge from his initial demand.

"We provide nearly $4 billion a year to the Defense Ministry … and do we want to put our money in the hands of these guys?" said Daniel Kurtzer, former U.S. ambassador to Israel who now teaches at Princeton University. "I'd say no."

Netanyahu is reported to be considering Ron Dermer as his foreign minister. Dermer served as Israel's ambassador to the United States starting in 2013 and through the Trump administration, with which he was especially friendly. He arranged Netanyahu's 2015 speech to Congress. Dermer's appointment would be a "poke in the eye" for Biden, Kurtzer said.

Republicans remain eager to criticize anything short of unquestioning support for Israel from the Biden administration. After the Israeli government revealed that the U.S. Justice Department had launched an inquiry into the May killing of Palestinian American journalist Shireen Abu-Akleh near the West Bank city of Jenin, Sen. Ted Cruz, R-Texas, demanded Attorney General Merrick Garland and "everyone involved in this debacle" be "fired or impeached."

Multiple investigations by independent human rights and journalism organizations have concluded that an Israeli soldier probably fired the shot that killed the veteran journalist. Israel eventually acknowledged one of its soldiers was likely responsible. No one has been disciplined.

If the new Israeli government decides to try to annex the West Bank, it would jeopardize the Abraham Accords, a deal brokered under the Trump administration that opened business and some diplomatic ties between Israel and several Persian Gulf states, such as the United Arab Emirates, that had previously refused to recognize Israel's existence.

The UAE's entry into the agreement was predicated on Netanyahu, in his previous stint as prime minister, backing away from plans to annex West Bank territory.

"If they push too far, it will foreclose any movement forward" in regional relations, said Aaron David Miller, a former U.S. envoy for the Middle East now at the Carnegie Endowment for International Peace.

Miller thinks Biden and Netanyahu will attempt to avoid overt conflict to safeguard their own domestic and global positions: "Biden wants to avoid a public wrestling match with Netanyahu," Miller said, while Netanyahu "craves the international stage and is intending to strut on it."

Publicly, U.S. officials remain cautious, saying they want to see what kind of government Netanyahu ultimately forms, reiterating their "ironclad" commitment to Israel while emphasizing American "values" that include freedom and prosperity "in equal measure" for Israelis and Palestinians.

"The administration is right to be concerned ... and to telegraph those concerns," Sen. Chris Van Hollen, D-Md., a member of the Senate Foreign Relations Committee, said in an interview. He is one of several Democratic lawmakers who are firm supporters of Israel but have raised alarms over potential members of the new government. These include Sen. Bob Melendez, D-N.J., who chairs the committee, and Rep. Brad Sherman, D-Calif.

But Ben-Gvir further alienated Biden administration officials by taking an electoral victory lap at a memorial service for Kahane, who was assassinated more than 30 years ago.

"Celebrating the legacy of a terrorist organization is abhorrent — there is no other word for it," State Department spokesman Ned Price said in unusually strongly worded comments. "We remain concerned by the legacy of Kahane and the continued use of rhetoric among violent right-wing extremists," he said.

Ben-Gvir has reached an agreement with Netanyahu that would allow him to vastly expand police powers and remove officers from oversight by other legal authorities.

Naming a person who has been convicted of terrorism-related charges to head Israel's national police force has alarmed numerous Israelis.

"It means that the police will become politicized to favor the extreme right," the liberal Israeli newspaper Haaretz said in an editorial this week. "Those who are supposed to be safeguarding democracy have turned into soldiers at the service of politicians. That's what happens when those accused and convicted of crimes take control of the institutions charged with maintaining law and order."

The prospect of a Ben-Gvir-run police force has also alarmed American supporters of Israel. Ben-Gvir "has promised a no-holds-barred crackdown on terrorism and increased police and border security presence," Yulia Shalomov, a fellow at the U.S.-based Atlantic Council think tank, said in a recent web appearance. His party "has consistently stoked domestic ethnic and societal tensions," she said.

Some of Netanyahu's partners have threatened to criminalize homosexuality and to ban non-Orthodox Jews from Israeli citizenship. Many U.S.-born Jews are members of more progressive branches of the faith, such as Reform or Conservative Judaism, and might not be able to obtain Israeli citizenship under the proposed laws.