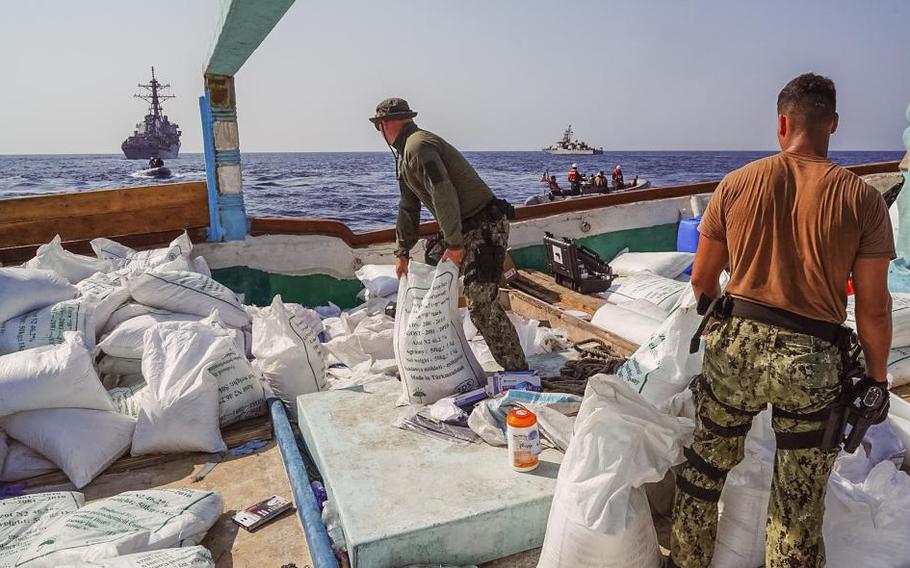 Crew members of USS The Sullivans and patrol coastal ship USS Hurricane, seen in the background, inventory a large quantity of urea fertilizer and ammonium perchlorate discovered on board a fishing vessel intercepted by U.S. naval forces while transiting international waters in the Gulf of Oman, Nov. 9 (Kevin Frus/U.S. Navy)

Iran is being accused of “an unlawful transfer of lethal aid” after ships from the U.S. 5th Fleet seized more than 170 tons of potentially explosive chemicals on a fishing boat in the Middle East, Naval Forces Central Command said in a statement Tuesday.

Navy destroyer USS The Sullivans and the Coast Guard cutter John Scheuerman intercepted the fishing vessel in the Gulf of Oman on Nov. 8 after it left Iran on a route historically used to traffic weapons to the Houthi militant group in Yemen, the statement said.

The patrol coastal ship USS Hurricane assisted in the seizure of materials from the fishing boat, which was carrying more than 70 tons of ammonium perchlorate, commonly used to make explosives and fuel for rockets and missiles, the statement said. 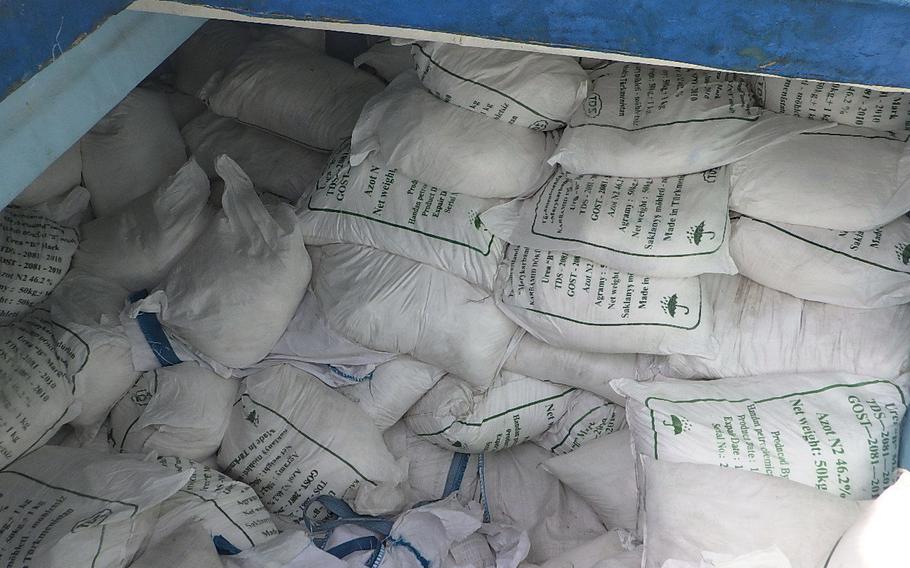 Bags of urea fertilizer and ammonium perchlorate are stored a cargo compartment on board a fishing vessel intercepted by U.S. naval forces while transiting international waters in the Gulf of Oman, Nov. 8. (U.S. Navy)

The ship also carried 100 tons of urea fertilizer, the statement said. The chemical compound has agricultural uses but is also a key ingredient in improvised bombs.

“This was a massive amount of explosive material, enough to fuel more than a dozen medium-range ballistic missiles depending on the size,” Vice Adm. Brad Cooper, commander of NAVCENT and 5th Fleet, said in the statement.

Experts say Iran and Middle East allies of the U.S. are locked in a cold war of armed proxy groups and covert attacks.

Iran has been accused of transferring rifles, rocket-propelled grenades and missiles to Houthi rebels in Yemen despite a United Nations arms embargo.

And the U.S. says that militant attacks have increased in recent years in the busy shipping lanes of the Middle East, and that the number of weapons seized from ships tripled in the last year.

“The unlawful transfer of lethal aid from Iran does not go unnoticed,” Cooper said in Tuesday’s statement. “It is irresponsible, dangerous and leads to violence and instability across the Middle East.”

International law generally allows the boarding of potentially stateless vessels for checks to see if they are registered under any country’s flag.

U.S. forces sank the fishing vessel Sunday in the Gulf of Oman, according to the statement.

The four Yemeni crew members were arrested and transferred to Yemen’s coast guard at an exchange Tuesday in the Gulf of Aden, the statement added.