Where learning is against the law: A secret school for Afghan girls 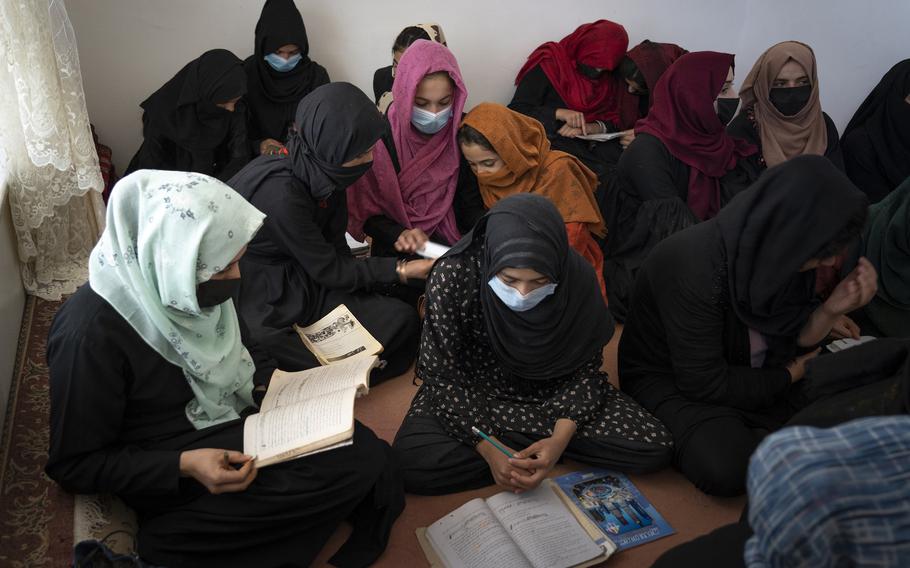 The students Masouda teaches attend classes for just a few hours on any day to reduce the chance of discovery by the Taliban, which promised but has not delivered a policy for girls of secondary-school age to be educated. (Sandra Calligaro/for The Washington Post)

KABUL — On a quiet residential street, teenage girls with school bags swiftly entered a large green gate. They were dressed in traditional garb, their faces covered, and many were holding copies of the Quran, Islam’s holy book. It was for their own protection.

The house is a secret school for Afghan girls who are barred by the Taliban from getting an education. If agents raid the house, the girls will pull out their Qurans and pretend they are in a madrassa, or Islamic school, which the country’s new rulers still allow girls to attend.

“The Taliban are floating around in this area,” said Marina, 16, a 10th-grader. “So, I always carry a Quran in the open. My other books are hidden in my bag.”

More than a year after seizing power in Afghanistan, the Taliban still refuse to allow girls to attend secondary school, from grades seven to 12. The ban, as well as other hard-line edicts restricting women’s lives, have triggered global outrage and widespread protests by Afghan women.

But a more subtle form of defiance is also happening. Underground schools for girls have formed in the capital and other Afghan cities, hidden away in houses and apartments, despite the immense threat to students and teachers. For the girls and their families, it is worth the risk.

“It doesn’t matter if the Taliban becomes aware of this school,” said Angila, also 16 and in the 10th grade. “Education is my basic right. No one can take that away.”

Washington Post journalists made several visits last month to a secret school in Kabul where 25 girls were taught in various subjects for roughly two hours a day. Classes were kept short to lessen the chances of discovery by the Taliban. The girls and their teacher spoke on the condition that they be identified only by their first names, fearing retaliation from the authorities.

The Taliban have said repeatedly that secondary schools for girls will reopen when there is an appropriate “Islamic environment.” But the group has provided no criteria for what constitutes such an environment.

When the Taliban first seized power in 1996, they closed schools for all girls — then, too, underground schools were formed to fill the void — banned women from working and forced them to wear head-to-toe coverings known as burqas whenever they ventured outside the home.

The group has been less draconian this time around, and the issue of education has revealed divisions among the Taliban’s leaders and religious scholars. In some areas, local Taliban officials have allowed girls above sixth grade to attend school, bowing to pressure from community leaders.

Last month, the Taliban’s deputy foreign minister, Sher Mohammad Abbas Stanikzai, made a rare public appeal urging that all secondary schools for girls be reopened, adding that “the delay is increasing the gap between [the government] and the nation.”

“Education is obligatory on both men and women, without any discrimination,” Stanikzai said in a televised speech. “No one can offer a justification based on sharia [Islamic law] for opposing this.”

But the hard-line conservative leaders who form the backbone of the movement remain opposed. And the Taliban have issued other restrictions, including mandating that women wear a face veil. Last month, a conservative cleric loyal to the hard-liners was appointed as the education minister.

Western governments have made clear that improvements in women’s rights are essential for the Taliban to gain access to $7 billion of foreign reserves frozen by the international community.

Abdulhaq Hammad, a top Taliban official in the Ministry of Information and Culture, insisted that “90% of Taliban members are against the closure of the schools.” But convincing the remaining 10 percent is a delicate process.

“The Taliban don’t want to create any fragmentation amongst themselves; they don’t want to be broken from within,” Hammad said. “There are struggles with the 10%. But their unity is the secret of their success against the American invasion. If it’s broken, it will be very difficult to repair.”

Five months ago, a woman named Ayesha launched a collective of 45 underground schools around the capital. She was motivated in part by her bad marriage, she said: “Women should not be dependent on men. Education is the only way out of our difficulties.”

But within a month, her funds dwindled. Many of the schools closed. Others were shut down out of fear. Only 10 are active today, and Ayesha is struggling to find donors to support them. The girls in her schools come from the poorest families; with the Afghan economy collapsing, most can’t pay tuition or even buy textbooks.

Worse, she fears the Taliban will come for her. The group’s intelligence agency has summoned her three times, she said, forcing her into hiding.

“I don’t want to shut down these schools,” she said, looking determined. “They will continue.” 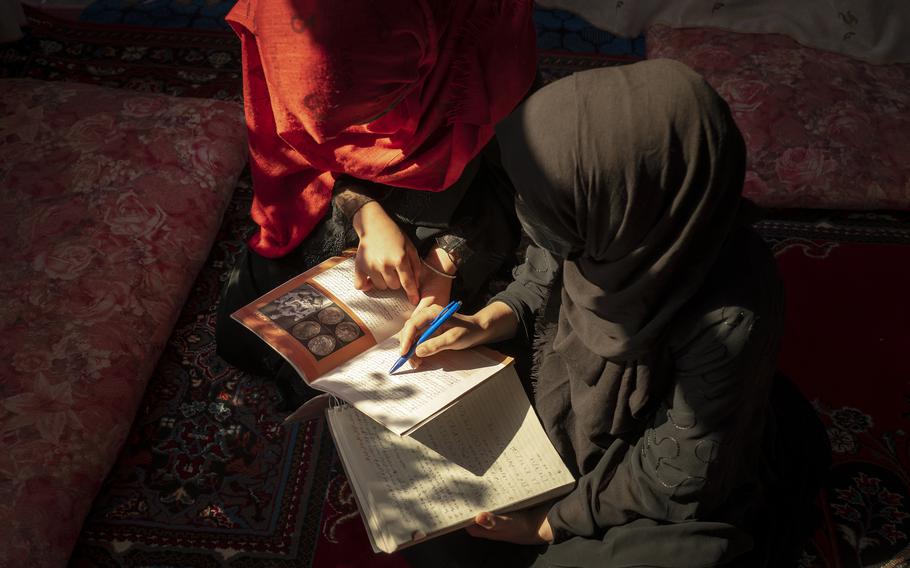 Before class begins, Masouda, right, reviews material with one of her students. (Sandra Calligaro/for The Washington Post) 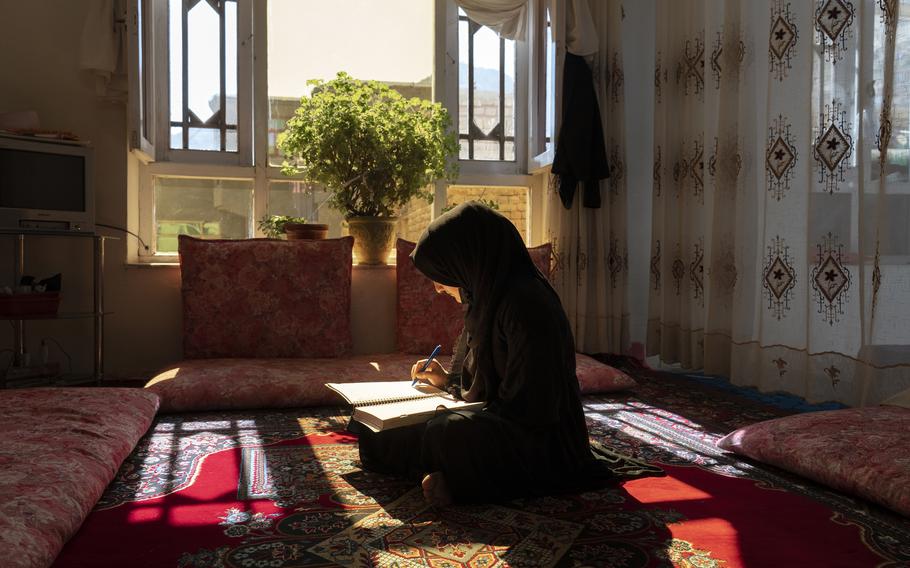 When the Taliban took power, preparations by Masouda, 22, for the medical school entrance exam were derailed. Still hopeful, she resumed preparing. (Sandra Calligaro/for The Washington Post) 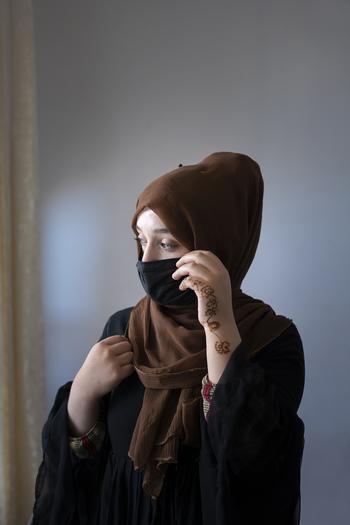 Marina, 16, knows the Quran intimately and is expected to play a leading role in the religious-studies subterfuge if the police raid the school. (Sandra Calligaro/for The Washington Post) 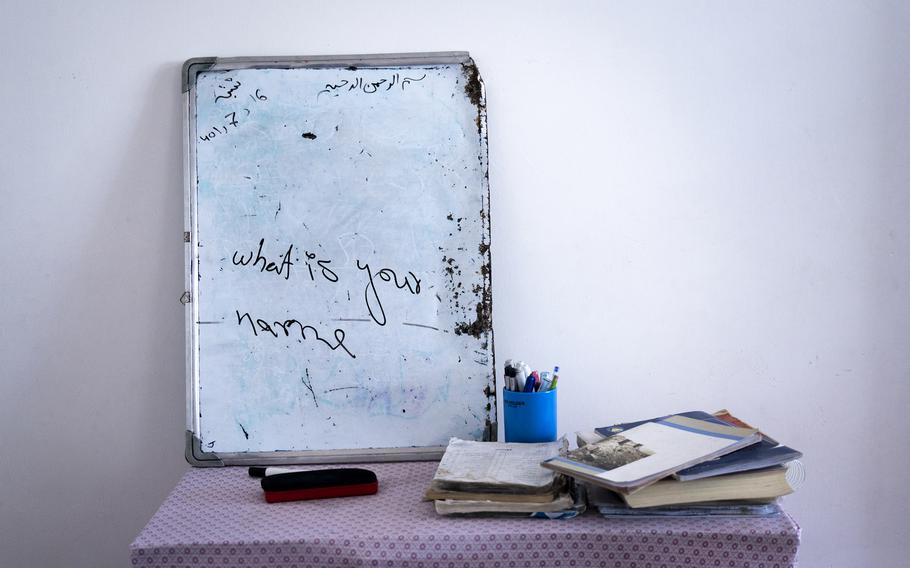 On a recent day, Ayesha took two Post journalists to one of her underground schools in Kabul.

Past the green gate was a compound with potted plants and flowers. There were rows of slippers at the entrance to the classroom, which was about the size of a one-car garage. Inside, the girls sat on the pink-carpeted floor in front of a small whiteboard. Next to it stood their teacher, Masouda. At 22, she was not much older than some of her students.

“Girls, you shouldn’t be afraid,” Ayesha assured them. “This is your right, and no one can take it from you.”

The girls recited a few verses from the Quran. Then class got underway.

“Today’s lesson is on pages 37, 38 and 39,” Masouda said, opening a biology textbook. “It’s about the types of plants and vegetables.”

She looked around. Only a few girls had the textbook.

“If someone doesn’t have a book, please take notes,” Masouda said, as she wrote on the whiteboard.

“Who would like to come up and explain this?”

Angila raised her hand. She stood and recited the lesson in a clear, authoritative voice.

Biology was her favorite subject, she explained after the class was over.

“I want to be a physician,” said Angila, who wore a head-to-toe black gown and a lime-green headscarf. “This is my dream. From childhood, I wanted to become a doctor.”

She was well on her way, part of a generation of girls and women that started attending school during the American occupation. When the Taliban regained power and ordered teenage girls to stay home, Angila was devastated.

“I watched the boys go to school, but I couldn’t,” she recalled. “My heart was broken.”

Masouda understands the psychological toll. After graduating from high school, she studied at a junior college. She was preparing for university entrance exams when the Taliban captured Kabul.

As the economy fell apart, her father and older brother lost their jobs. They agreed to host the school inside their home as a way to earn some money, and Masouda volunteered to teach.

“The school closures had a big impact on me, just like for the other students,” Masouda said. “It’s created mental problems for some students. To bring a sense of humanity, we share our knowledge.”

As Ayesha left the class, she reminded the girls to wear their hijabs, or headscarves, so the Taliban “will not make the hijab an excuse to stop you. If someone stops you, tell him you are going to attend class of holy Quran,” she told them. 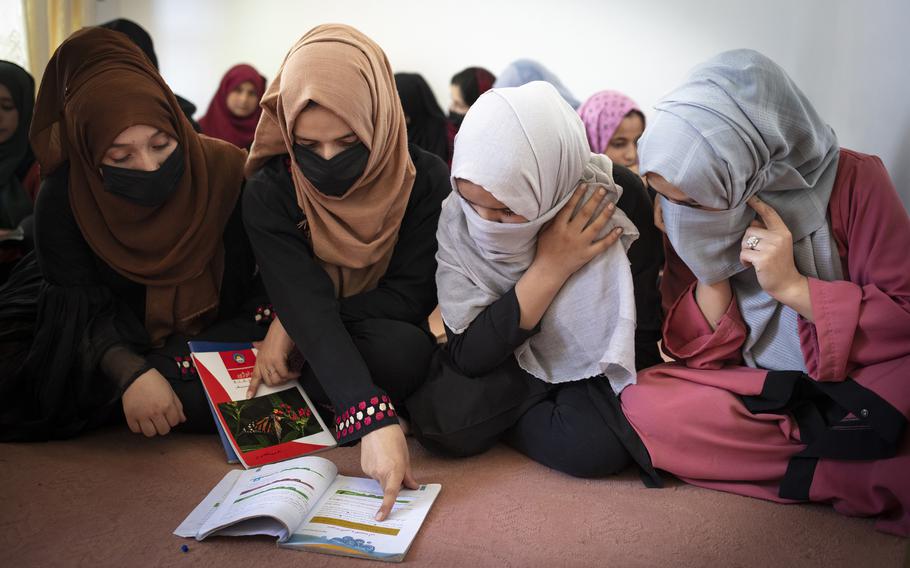 Some of Masouda’s students. All are poor, and most cannot pay any fees or buy textbooks. (Sandra Calligaro/for The Washington Post) 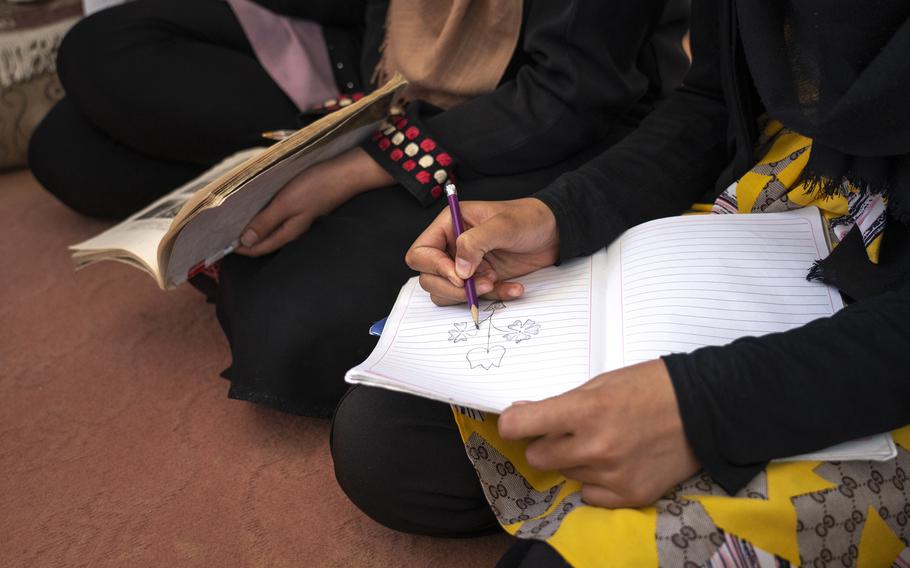 One of the students draws in her notebook before class. (Sandra Calligaro/for The Washington Post) 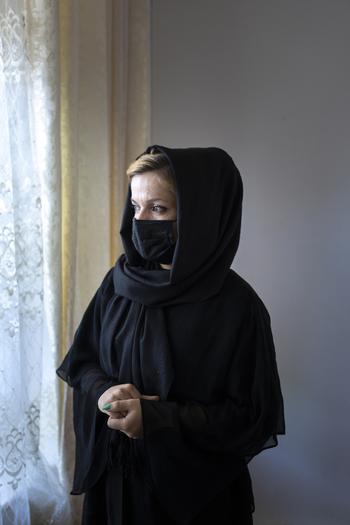 Tamana, 20, is one of the students. The women dress in line with Taliban dictates and carry copies of the Quran visible to all to minimize the chances of being stopped and questioned. (Sandra Calligaro/for The Washington Post) 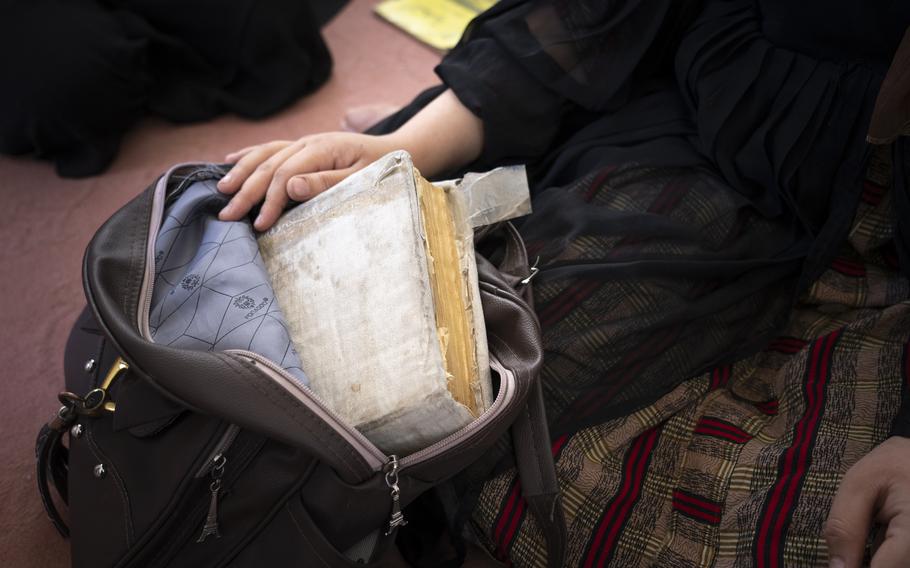 A student has a Quran at hand while secretly attending a class in Kabul. If the police should burst in, the class immediately will assume the guise of religious studies. (Sandra Calligaro/for The Washington Post)

Masouda’s younger brother has been given clear instructions not to open the green gate if anyone knocks, unless he recognizes the person on the other side.

“The Taliban are a bit far away from here, but they have spies,” Masouda said.

Three months ago, she stopped classes for 25 days after the Taliban arrested a teacher working in another underground school. If Taliban agents enter Masouda’s school, the girls know to open the cupboard and grab the Qurans.

Then, Masouda will ask Marina, who has memorized the Quran, to come forward.

“If they come, she will take over the class, and I will pretend to be a student,” Masouda said.

Marina, dressed in a traditional purple gown and a black headscarf, said that she’s attending the class “to gain courage.”

She wants to become a pilot for Kam Air, an Afghan carrier, because “there’s very little representation of women in the aviation sector.”

She raised her hand eagerly and answered a geography question, about the country’s longest river.

The next day, class began with chemistry and quickly moved to history. Most of the girls knew their country’s history, especially how women were treated.

Their mothers grew up under the first Taliban government and were never educated.

“My mother doesn’t want me to be illiterate, like her,” said Manizha, 18, a 12th-grader, who dreams of being a television journalist.

The last subject of the day was English. And it gave Masouda a chance to learn from her students. She asked Marwa to come to the front of the class.

“I like red color. What color do you like?” asked Marwa, 17, who says she wants to become a heart surgeon.

“What do you want to become in the future?” Marwa asked.

A few minutes later, class was over. The girls quickly filed out through the green gate.

Masouda erased the evidence from the whiteboard.