A Netanyahu government would probably clash with the Biden administration 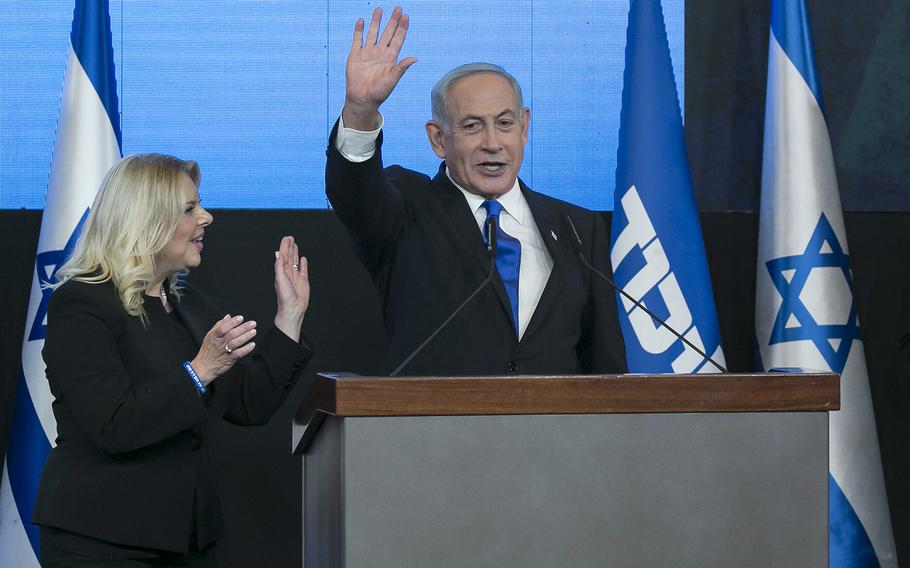 RAANANA, Israel (Tribune News Service) — In the waning days of his most recent stint as Israel’s prime minister — just over a year ago — Benjamin Netanyahu made no secret of his disdain for President Joe Biden.

Struggling to save his own political neck, Netanyahu suggested Biden was weak on some of Israel’s most formidable enemies, Iran and the Palestinian militant group Hamas, and pledged to defy a Democrat-led Washington if necessary.

On Wednesday, Netanyahu emerged as the likely choice for the top government position in Israel once again, after the country’s fifth election in four years. His right-wing bloc, which includes ultra-Orthodox and extreme nationalists, appeared to take a solid majority in the Knesset, or parliament.

“Today, we won a sweeping vote of confidence,” Netanyahu declared early Wednesday to cheering supporters from his Likud Party. Many chanted, “Bibi, king of Israel!” using his familiar nickname.

The results, if they hold, are sure to complicate Israel’s relationship with the United States.

Already having made history as the longest serving prime minister and currently on trial for corruption, Netanyahu was famously fond of Biden’s predecessor, former President Donald Trump.

Trump in turn showered Netanyahu with praise and favors — including the reversal of decades-old U.S. policy by moving the American Embassy from Tel Aviv to Jerusalem — and the alliance of admiration pushed Israel closer to the GOP camp in what had always been a bipartisan relationship.

“This has to complicate the ties with the U.S. administration,” said Shira Efron, research director for the U.S.-based Israel Policy Forum. She noted that Biden and Netanyahu have a long personal friendship but an equally long list of disagreements. The problems, she said, will be rooted in “both persona and policies,” from expansion of settlements in the occupied West Bank to diminishment of democracy and civil rights.

“Make no mistake: This is a vulnerable time for Israel,” said Eric H. Yoffie, an American rabbi and former president of the Union for Reform Judaism, writing Wednesday in the Haaretz newspaper.

He and others singled out Netanyahu’s alliance with Itamar Ben-Gvir, a far-right Knesset member known for anti-Arab rhetoric and proposals to deport Arabs from Israel.

“Ben-Gvir’s emergence as a significant political player in Israel will undermine the country’s public standing in America, strengthen Israel’s enemies and offend its friends,” Yoffie said.

For now, U.S. officials are remaining guarded in their public statements, noting the results are not expected to be final until Friday, praising the large turnout in Tuesday’s vote and pledging to work with any Israeli government “on our shared interests and values.”

It could take weeks of negotiations for the next Israeli government to take shape. U.S. State Department spokesman Ned Price said it was premature to comment on any potential government member or policy.

However, he described a vision of government that Netanyahu’s critics say is profoundly at odds with much of the rhetoric that came out of the political campaign by Netanyahu and his allies.

“We hope that all Israeli government officials will continue to share the values of an open, democratic society including tolerance and respect for all in civil society, particularly for minority groups,” Price said. He reiterated U.S. commitment to a “two-state solution” to the Israeli-Palestinian conflict — the establishment of an independent Palestinian state alongside Israel — and “equal measures of security, freedom, justice and prosperity for Israelis and Palestinians alike.”

In addition to a prickly relationship with the Biden government, a Netanyahu-led coalition would probably have little interest in negotiations with the Palestinians over land and independence and could also halt the expansion of Israel’s new ties with Arab gulf states.

Normalization in fact began under Netanyahu, who negotiated the so-called Abraham accords, which opened the way for trade and business opportunities.

The current Israeli government had hoped to form a military alliance with some of those former enemy countries. But experts said that such an initiative — what some have called a Mideast NATO — would probably be off the table if Netanyahu’s government is seen as too radical or anti-Arab.

Some gulf state governments have insisted that deepening relations would help the Palestinians’ cause — a justification that Netanyahu’s hardened stance seriously undermines.

“The fact that his coalition is so right-wing is not a source of comfort to gulf monarchies,” said Rabie Barakat, an analyst at American University of Beirut.

“The Emirates, Saudi Arabia, they’re using their soft power to instill this idea that normalization is where a better future lies for the region,” he said. “With Netanyahu, there will be complications.”

Some of Israel’s geographically closer neighbors are also girding themselves for what promises to be a stormy period ahead.

One particularly delicate case is Lebanon. The two countries have been at war for years but still managed to delineate their respective maritime borders in a landmark, U.S.-brokered deal that included Prime Minister Yair Lapid and then-Lebanese President Michel Aoun. Signed last month, it also received the tacit blessing of Hezbollah, the Lebanese Shiite armed group and political party that plays a dominant part in Lebanon’s politics and went to war with Israel in 2006.

In the run-up to the election, Netanyahu excoriated the agreement, saying that it was “illegal” and that if elected, he would work to “neutralize” it.

Jordan too is unlikely to welcome the return of a pugnacious leader whose previous tenure was marked by a nadir in the two nations’ long-standing cooperation over energy, water and the Al Aqsa Mosque in Jerusalem’s Old City, Islam’s third holiest site, over which Jordan has custodial rights.

Jordan also has a significant population of Palestinian refugees and is a staunch proponent of a two-state solution.

Relations had rapidly improved after Netanyahu’s ouster, with Lapid making a rare visit to Jordan’s King Abdullah II at his palace in Amman in July.

But Marwan Muasher, a former Jordanian foreign minister who served as ambassador to Israel in the 1990s, said the return of a right-wing government that included “racist elements” would require “a serious reevaluation” of ties.

“This is obviously a government that isn’t serious at all about the peace process, and certainly does not intend to engage in any sort of negotiations, let alone withdraw from occupied territory, and will treat Arabs under occupation and even Arab citizens of Israel in a racist manner,” he said.

“The election of this government will poison the atmosphere in the region,” Muasher said.

Gideon Rahat, a senior fellow at the Jerusalem-based Israel Democracy Institute, said Israel and the U.S. might also butt heads over perceived threats to Israel’s democracy.

Netanyahu’s coalition partners have called for reforms that would weaken the independence of the judiciary by blocking the Israeli Supreme Court’s ability to undo the work of parliament by striking down laws. Leaders from the Netanyahu-allied Religious Zionism faction, which is led by Ben-Gvir, have also voiced support for striking from the penal code the “fraud and breach of trust” offense that Netanyahu faces in his corruption trial, saying that it’s been used to target politicians.

“If democracy in Israel deteriorates, the U.S. may not be happy about it,” Rahat said.

In his corruption trial, Netanyahu stands accused of using his position to promote regulations that financially benefited a media company in exchange for favorable news coverage. He has maintained his innocence.

“It’s a deja vu to the political stalemate that was under Netanyahu,” he said.

Israeli voter Abraham Granit, a retired 85-year-old army colonel who lives in the central city of Raanana, was more optimistic. He said he wasn’t worried about relations between the U.S. and Israel, pointing to how the countries have been strong allies for decades.

“The relationship between Israel and the U.S. generally is not dependent on who is prime minister,” he said.

But Granit, who voted for the Religious Zionism faction, said he would implore Biden to support Israeli policy to build more settlements in the occupied West Bank, where he has two children and 17 grandchildren living in one such settlement. The Biden administration considers settlements an impediment to peace, and they are considered illegal by much of the world.

Miller reported from Raanana, Bulos from Beirut and Wilkinson from Washington.