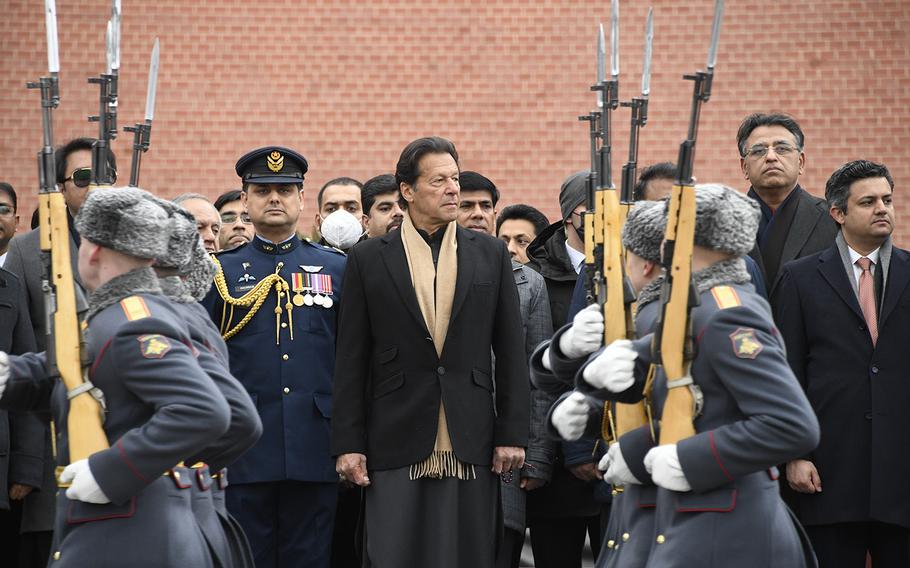 Pakistan’s then-Prime Minister Imran Khan, center, takes part in a wreath-laying ceremony at the Tomb of the Unknown Soldier at the Kremlin Wall in Moscow, Russia, on Feb. 24, 2022. (Alexander Nemenov/Pool )

Pakistan's former prime minister Imran Khan started a protest march to the nation's capital Islamabad in the latest attempt to press the government to call for early elections, while hitting back at the military's spy chief.

Khan launched the protest that he calls a march for "real freedom" standing on top of a makeshift caravan in a convoy of vehicles with his supporters in Lahore, about 270 kilometers east of Islamabad. The convoy will make a slow journey to the capital in seven days by making stops in multiple cities.

The protest starts a day after the military's spy chief General Nadeem Ahmad Anjum in a rare public appearance called out Khan for constant public outbursts against the army while asking for illegal favors in closed-door meetings with the institution's head, General Qamar Javed Bajwa. Anjum also revealed how Khan offered Bajwa an indefinite extension in his six-year term before the leader was ousted in a parliament vote in April. Khan responded to the allegations at the start of the march.

"Open your ears and listen," Khan said while referring to Anjum. "I can say a lot. I am silent. I can respond to you but I don't want to harm my country," He said he asked the military leadership to ensure early polls and there was nothing illegal about it.

Khan's outburst against the military is rare as it is seen as the most powerful institution in the nation with an outsized role in foreign and security policies. It has also influenced politicians and government affairs. Pakistan's military decided last year to become apolitical and remain within its constitution rights, according to its spokesman.

The political tension comes at a time the South Asian nation is looking to recover from catastrophic floods. Moody's Investors Service downgraded the nation deeper into junk on concerns about debt payments. The nation's foreign exchange reserves dropped to the lowest in more than three years, before receiving a $1.5 billion boost from the Asian Development Bank this week, and dollar bonds trade in distressed levels.

Prime Minister Shehbaz Sharif's government has allowed Khan permission to protest at a ground in the outskirts of Islamabad. Khan has said the protest will be peaceful and supporters will neither block or enter the capital's so-called red zone, which includes important government buildings and embassies.

The former international cricket star has won majority of by-elections since his ouster and drawn large crowds to protests. In public speeches, he has blamed his political opponents of conspiring with the U.S. to remove him from power. Both have denied the allegations.

Khan has also seen multiple legal challenges after the government framed him in corruption and other cases, that may put a brake on his political ambitions. He has been disqualified as a member of parliament in one case and obtained pre-arrest bails in multiple other cases.