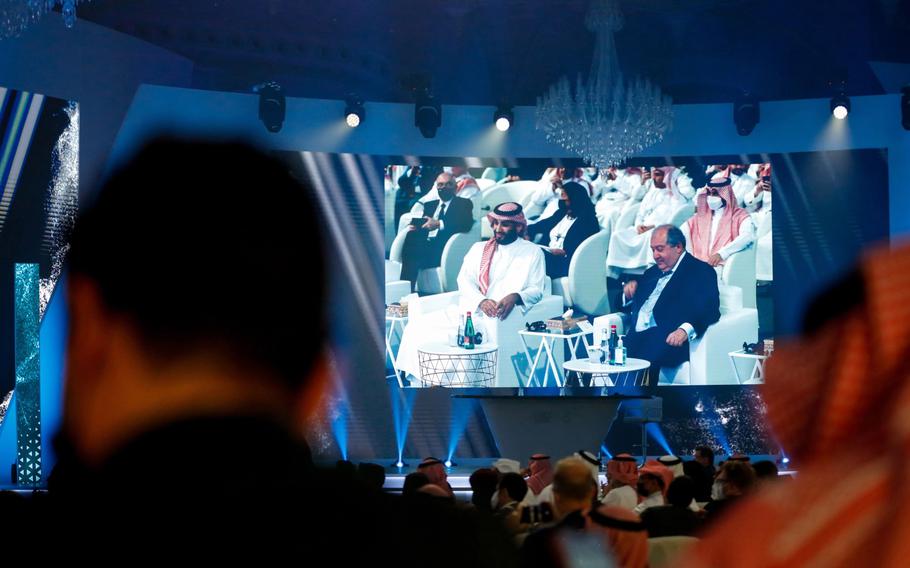 Pessimism about the state of the world has been front and center as leaders of global finance gather in Saudi Arabia this week, but with the host nation a striking exception to the general gloom.

The kingdom is enjoying its moment, with oil money gushing in to drive the fastest growth rate in the Group of 20 major economies, and a sense -- tangible in the hallways of the Ritz-Carlton Hotel in Riyadh, where the Future Investment Initiative was set to wrap up on Thursday -- that Saudi Arabia is in the ascendant.

The three-day event is meant to showcase an economic transformation in the kingdom, and Crown Prince Mohammed Bin Salman now has more cash than ever to make that happen.

It’s a stark turnaround for the 37-year-old heir to the throne, who has re-emerged from relative isolation following the murder of Saudi critic and columnist Jamal Khashoggi in 2018. The prince has steadily consolidated power in ways that have disrupted Saudi society, defanging the once-powerful religious police and, in 2017, ordering a purge and mass arrests of some of the nation’s most powerful people.

Now, Prince Mohammed is sitting on his first budget surplus, allowing him to finance domestic mega-projects, channel the $620 billion Public Investment Fund (PIF) into assets globally, and project political clout in the region and beyond.

On Thursday, the kingdom’s largest lender announced it was taking a 9.9% stake in Credit Suisse Group, whose status as one of Europe’s most prestigious banks has been shattered by a succession of big losses and management chaos. The $1.5 billion deal is the first major international acquisition for Saudi National Bank, which is 37% owned by the PIF, whose chairman is Prince Mohammed.

Earlier this year, he took over the title of prime minister from his father, the king, formally making him head of government. And just weeks before the U.S. midterm elections, his government rebuffed calls from President Joe Biden to boost oil production to keep prices low, and instead led a move with Russia and other oil-producing nations to prop them up -- a decision widely seen in Washington as a snub worthy of retaliation.

Behind Saudi’s newfound swagger, there remains a big catch. A winner from high crude prices, Saudi Arabia still struggles to persuade the world it has an economy beyond oil that’s worth investing in. Most of those who’ve descended on Riyadh for the conference are looking to make connections and extract money from the kingdom, not pump it in.

But for now, with panelists at the event -- including some of Wall Street’s top bankers -- painting a bleak picture of the global outlook, Saudi Arabia looks like a bright spot.

Much of the talk has revolved around how Russia’s invasion of Ukraine has sent energy prices soaring and derailed the green transition; China’s economy is slowing and its markets have sold off, and central banks are pushing the world toward recession to fend off an inflation crisis.

Meanwhile, economic output in Saudi Arabia grew 12.2% in the second quarter, the fastest in more than a decade. The non-oil economy -- the engine of job-creation -- expanded 8.2%.

And unemployment fell to 9.7% in the period, while for Saudi women it dropped to 19.3%. Those numbers might look high by outside standards, but for the kingdom they’re the lowest on record, with increased female workforce participation one pillar of its economic transformation program.

“A lot of markets around the world are down today. Saudi is up,” said Finance Minister Mohammed al-Jadaan. “We have been planning for years a really dynamic execution program, and we are seeing the results.”

The good times are still based on oil income, which the kingdom needs to fund its transition to a completely different type of economy.

Saudi Arabia could have sat back and enjoyed the jump in living standards that high crude prices bring, “but instead they have chosen to execute on an urgent economic reform agenda,” said Zainab Kufaishi, Dubai-based head of Middle East and Africa at Invesco Asset Management.

That reasoning helps explain why Saudi Arabia decided to risk American anger -- and further strain a relationship under pressure since Khashoggi’s murder, which Prince Mohammed has denied ordering -- by keeping oil propped up at historically expensive levels around $90 a barrel.

The Biden administration was furious that it did so at a time when high U.S. gasoline prices are a political liability.

Prince Abdulaziz bin Salman, the Saudi oil minister, seemed exasperated as he discussed the U.S. reaction and its failure to accept the kingdom was looking out for its own interests. He cited past cases where it deployed its spare oil-production capacity in the interests of others, but indicated that times have changed.

“We made a pledge ourselves to focus on our future,” he said.

That future is outlined in “Vision 2030,” Prince Mohammed’s blueprint to reduce Saudi Arabia’s reliance on oil by diversifying and opening up its economy.

Foreign direct investment has increased steadily since the plan was announced. It still tends to go into fossil fuels. Last year, FDI reached $19.3 billion, the most since 2010 - but the bulk of that was from state oil company Saudi Aramco selling part of its pipeline unit.

That means the crown prince’s most ambitious dreams -- which he’s staking the future of the country on -- will likely have to be self-financed via oil money.

Neom, the futuristic city he wants to build in the desert at an estimated cost of half a trillion dollars, has seen large contracts awarded by the state -- but not much in the way of international money to help bring it to life.

The biggest deal at this year’s conference was an example of outgoing Saudi largess, not incoming funds. The government said it would set up companies to invest $24 billion in Bahrain, Oman, Jordan, Iraq and Sudan.

Prince Mohammed, who as of Wednesday hadn’t attended the conference in person, announced the plan in a sleek video. “I believe that the new Europe is the Middle East,” he said. It wasn’t clear what he meant by that.

Beyond the palatial international hotels, and a handful of swanky restaurants tucked away in villas or outdoors at malls, visitors to Riyadh will see little that reminds them of Europe. While the kingdom has become much more culturally open and less gender-segregated under Prince Mohammed, alcohol and homosexuality are still illegal, the entertainment industry is in its infancy, and much of the nation’s social life still takes place privately, inside walled compounds.

That may be one reason why the kingdom has struggled with its initiatives to attract foreign talent, get multinational companies to relocate their regional headquarters to Riyadh, and build new industries like Mideast hub Dubai, where nearly 90% of the population is foreign and enjoys a largely Western lifestyle.

That leaves Saudi Arabia in a race against time -- and its own limitations -- to make the lofty goals of the Future Investment Initiative come to life.

Karen Young, a senior research scholar at Columbia University’s Center on Global Energy Policy, says the investment case across all kinds of Saudi industries is improving. She cites examples from manufacturing and pharmaceuticals to hospitality and entertainment.

Still, she says, “there’s a mismatch between the business case for FDI in the kingdom, and an effort to brand the mega-projects as providing solutions to everything.”