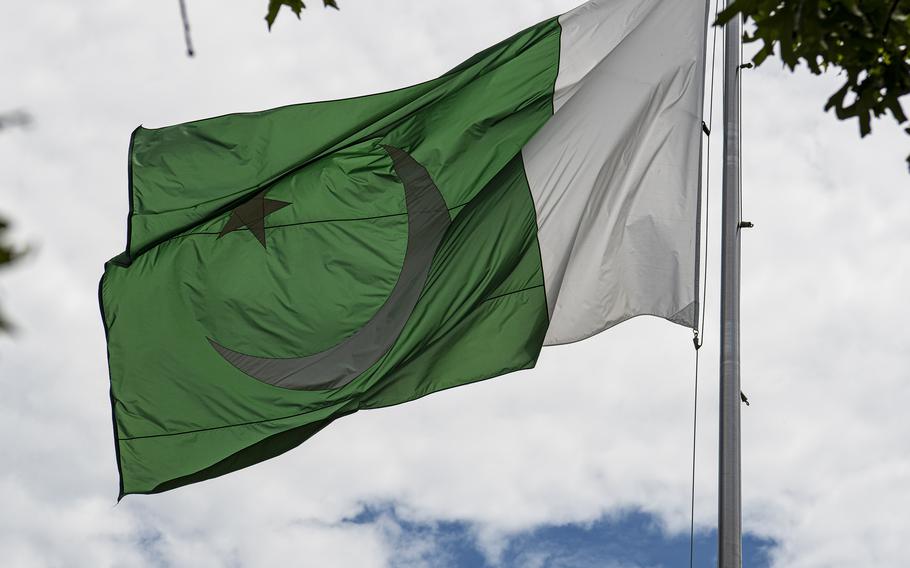 The Pakistani flag flies over the Pakistani Embassy compound in Washington, D.C., on July 6, 2022. (Carlos Bongioanni/Stars and Stripes)

ISLAMABAD — An international watchdog said Friday it is removing Pakistan from its so-called "gray list" of countries that do not take full measures to combat money laundering and terrorism financing, a move that was quickly welcomed by the country's prime minister and other government officials.

The announcement was made by Raja Kumar, the president of the Financial Action Task Force, at a news conference in Paris. The FATF welcomed "Pakistan's significant progress in improving" its anti-money laundering and counter-terrorism financing policies.

Pakistan had been on FATF's gray list since 2018. Being on the Paris-based watchdog's gray list can scare away investors and creditors, hurting exports, output and consumption. It also can make global banks wary of doing business with a country.

Friday's announcement means Pakistan will no longer be subject to increased monitoring by the FATF.

It comes after a FATF mission to Pakistan last month, and months after the global watchdog said it believed Pakistan mostly complied with the organization's demands by acting against those linked to money laundering and terror financing.

In Islamabad, Prime Minister Shahbaz Sharif took to Twitter to welcome the decision, saying that his country's removal from the list was "vindication of our determined and sustained efforts over the years. I would like to congratulate our civil & military leadership as well as all institutions whose hard work led to today's success."

The "gray list" is composed of countries with a high risk of money laundering and terrorism financing but which have formally committed to working with the task force to make changes.

The FATF is made up of 37 member countries, including the United States, and two regional groups, the Gulf Cooperation Council and the European Commission. Currently, only Iran and North Korea are fully blacklisted and refuse to cooperate with the FATF.

"We want to be seen as a responsible and active member of the international community that is well aware of its international obligations," said Pakistani Deputy Foreign Minister Hina Rabbani Khar, speaking from Paris.

She expressed hope that Friday's decision would "give a much-needed boost to our economy and increase our economic and financial engagement with the outside world."