Gen. Michael “Erik” Kurilla, commander of Central Command, presents Sgt. Mickey Reeve with a medal for his contest-winning idea in a ceremony at MacDill Air Force Base in Tampa, Fla., on Oct. 14, 2022. Reeve received the Defense Meritorious Service Medal for his idea of building a simulator to help soldiers train on defending against drones while deployed. (John Onuoha/U.S. Army)

A deployed Army sergeant built a program that could help troops defend themselves against deadly aerial drones in the Middle East.

Sgt. Mickey Reeve built a prototype training simulator on an 8-year-old laptop in a tent in the middle of the Arabian desert, the infantryman told Stars and Stripes.

His idea made him the winner Friday of U.S. Central Command’s first Innovation Oasis, a Shark Tank-style competition that asked troops to pitch solutions to problems they’re facing.

About 160 troops submitted ideas that included the use of blockchain technology in the military’s supply chain and using Centcom’s badging system to make daily accountability easier.

Iran’s aerial drones, among the most advanced in the world, have allowed that country to launch attacks and gain “localized air superiority” in proxy wars in Yemen, Iraq and Syria, experts and U.S. military officials have said.

Central Command currently only has one laptop that allows troops to train on anti-drone defense, Reeve said in a pitch document.

That laptop only allows training on one anti-drone system, said Reeve, who is currently deployed to Prince Sultan Air Base in Saudi Arabia as a member of that base’s Counter-Unmanned Aircraft Systems (C-UAS) team.

This means that troops could be ill-prepared to work with the many disparate systems developed by different units and military branches, many of which do not communicate well together.

“CENTCOM currently has severely limited training solutions for its operators and base C-UAS systems,” Reeve said.

He hopes that operators can use his simulator to train teams on multiple systems. 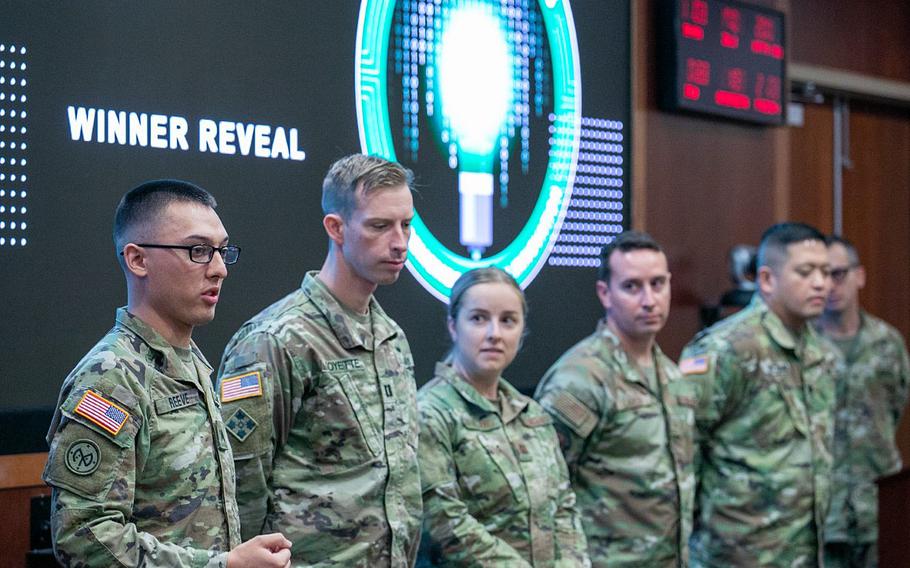 Four other service members identified problems they’re facing and pitched their potential solutions in the final round of Central Command’s ideas competition.

Army Maj. Matt Goyette pitched a military supply system based on the blockchain, a digital ledger where transactions are recorded in a way that makes it difficult for hackers to disrupt. If implemented, troops would have to spend less time on inventory, Goyette said.

“It wastes time trying to reach members and does not serve a realistic purpose in the event of an emergency or evacuation to get an accurate count of personnel within CENTCOM,” Kirkland said in a pitch document.

Moving the system to an unclassified network would allow troops to mark themselves as on leave or traveling, she proposed. The already existing badging system — which tracks when ID cards are used to scan into different areas — could be integrated into daily accountability, she added.

Air Force Staff Sgt. Stephen Larson, deployed to Al Udeid Air Base in Qatar, proposed a fix to the difficulties he has seen when loading airplanes with cargo pallets.

The military uses rectangular pallets that must be rotated to fit on a C-17 cargo plane. Sometimes, if pallets are crooked or turn while loading, straps and brute strength are the only ways to push them into place, said Larson, who designed a bracket that would help guide the pallets.

Army Lt. Col. Ferdinand Bacomo compiled lessons from his deployment, where he helped establish a new type of medical unit for use in “far forward missions.” This was difficult due to the team’s non-doctrinal and ever-changing configuration, Bacomo said.

“One of our goals is to make sure no one has to go through that painful process again,” he said, adding he hopes future surgeons will be ready before joining the new unit in the future.

Reeve, the winner of the competition, won a service award and a four-day pass.