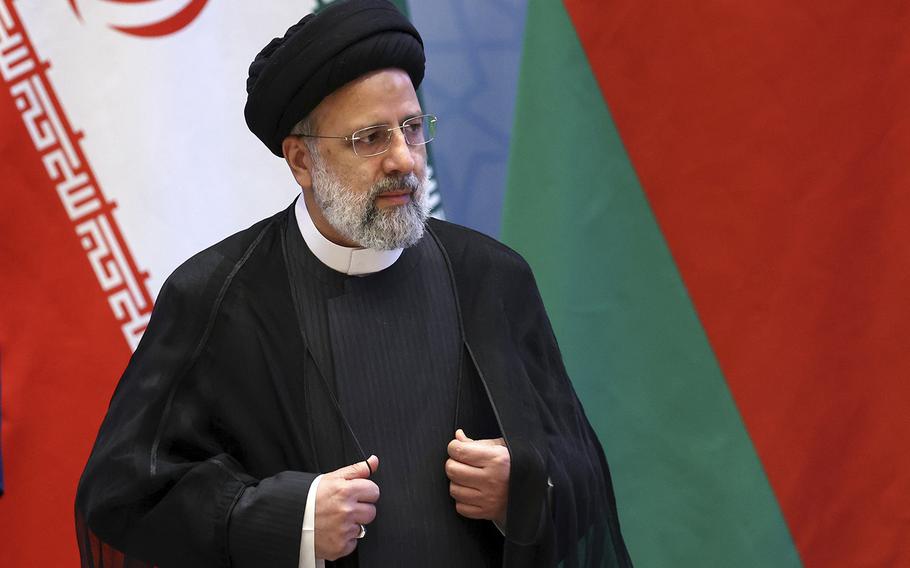 The shooting started in Zahedan before Friday prayers had ended.

Thousands of worshipers had gathered on Sept. 30 in the Great Mosalla of Zahedan, a large open-air space in the southeastern Iranian city, when a handful of young men broke away and began chanting slogans at a nearby police station. One man, 28, said his 18-year-old brother was among them. He spoke to The Washington Post on the condition of anonymity for fear of reprisals.

The young man followed his brother, pushing his way through the crowd, and stumbled on a shocking scene: Police and plainclothes security agents were firing at the protesters from the rooftop of the police station and other buildings. Security forces also began firing into the Mosalla, where people were still praying.

"They were shooting a lot, and this way and that way, I saw people get shot and fall," the young man said in a telephone interview from Zahedan. "Many people were shot, and they were crawling on the ground toward buses or other cars to hide behind them. I just wanted to find my brother and get out."

What happened that day - already known in Iran as "Bloody Friday" - is by far the deadliest government crackdown against protesters since demonstrations began sweeping the country nearly a month ago. Internet service has been cut or severely disrupted in the region over the past two weeks, along with the cellular network, making it difficult to piece together how the violence unfolded. The Post interviewed two witnesses to the Sept. 30 crackdown, including the young man, who described security forces using deadly and indiscriminate force against peaceful demonstrators.

The Post could not independently confirm their accounts, but their stories were corroborated by local activists and lined up with the findings of rights groups.

The Friday protest in Zahedan had been announced on social media earlier that week, in solidarity with the uprising that has gripped the nation since the death of Mahsa Amini, a 22-year-old woman who died in the custody of the "morality police" on Sept. 16. But the protesters, many of them ethnic Baluch - a minority group that lives mostly in southeast Iran and across the border in Pakistan - had local motivations as well.

They were infuriated by reports that a 15-year-old girl had been raped in police custody in the city of Chabahar in early September. This Baluch girl was their Amini, another young woman who they believed had been abused by state security forces. The crowd that day was chanting "Death to the dictator" and "The rapist must be punished" when security forces opened fire.

The 28-year-old man frantically dialed his brother's phone and eventually found him behind a white Peugeot. They ducked down and made their way out of the area, positioning themselves between a line of cars and a border wall of the Mosalla. The brothers had run only a short distance when they saw a mutual friend, whom they beckoned to escape with them. Then gunshots rang out again.

"[Our friend] was shot twice in the back, only two or three meters away from me," the young man said in an exhausted voice. "One of the bullets hit near his heart. He was martyred right there."

"From the evidence we've gathered, what happened at Mosalla was a massacre," said Mansoureh Mills, an Iran researcher at Amnesty International, which has counted at least 66 people killed that afternoon. Other human rights groups put the death toll even higher.

"The killing of children and people who were praying . . . I can't see how it could be called anything else," Mills said.

The Iranian government ramped up its use of force against protesters after an order issued by the country's highest military body on Sept. 21 to "severely confront troublemakers and anti-revolutionaries," according to a leaked document obtained by Amnesty and reviewed by The Post.

The security forces appear to be enforcing this broad order with an even heavier hand in ethnic-minority areas such as Baluchistan, as well as Kurdistan in western Iran, where Amini was from and where the protests started.

The Baluch, like the Kurds, have long been neglected by the Iranian government. The area where most of them live, Sistan and Baluchistan province, is among the poorest in the country. The Baluch and the Kurds are also predominantly Sunni communities in a country ruled by a theocratic Shiite government.

The state's response in these areas "has been particularly brutal," said Ali Vaez, Iran project director for the International Crisis Group. He warned that the government crackdown "was further exacerbating the risk of continued turmoil."

After the initial shooting around the police station, security forces also fired on crowds gathered around the Makki Mosque, a short distance from the Mosalla. Bullets riddled the front of the mosque and tear-gas canisters were fired into the prayer space, activists said, including the women's section, where mothers were sheltering with their children.

By this time, the young man and his brother had gathered a group of protesters to carry their friend's body to the Makki Mosque. A helicopter circled overhead, the young man told The Post, and gunmen inside periodically fired into the crowd. They were "shooting from above, and we had to go inside the mosque," the man recalled.

Many of the dead and wounded had been taken into the mosque by midafternoon; protesters threw rocks at security forces to keep them away, witnesses said. So many people were wounded that there was a shortage of blood at local hospitals, activists reported.

A 60-year-old man who lives in the Shirabad neighborhood in north Zahedan received news that his 25-year-old son had been fatally shot, and that his body was at the mosque. The man made his way there with great difficulty, asking others to help carry his son's body home.

"When we wanted to take my son's body out, two people were shot in front of me right at the door of the Makki Mosque. One was shot in the head and the other was shot in the chest," the father said in a telephone interview from Zahedan, sharing his story on the condition of anonymity. "We waited until sunset before we could leave."

State media announced that three members of the Islamic Revolutionary Guard Corps were also killed that day. Among them was Col. Hamid Reza Hashemi, a deputy intelligence commander for the Guard Corps in Sistan and Baluchistan, according to the semiofficial Tasnim News Agency.

The government has sought to blame the violence on Jaish al-Adl, a local militant group, but the group has denied any role in the protests, and the activists and witnesses interviewed by The Post say they did not see any armed protesters in the crowd. In a statement the day after the attacks, the commander of the Guard Corps, Gen. Hossein Salami, vowed revenge for the security personnel who had been killed.

"Salami's statement is a threat against the people," said Abdollah Aref, director of the Baluch Activists Campaign, an advocacy group based in Britain. "What they're saying is if you come out into the street, then we'll shoot you and kill you."

The young man and his brother made it home safely that Friday, but violence followed them. As protests continued in their neighborhood over the next several days, security forces responded with deadly force.

"They would wear local Baluchi clothes so they wouldn't be recognized and people wouldn't think they're linked to the government," the man said. "They would come in civilian cars and civilian clothes, shoot people, and leave."