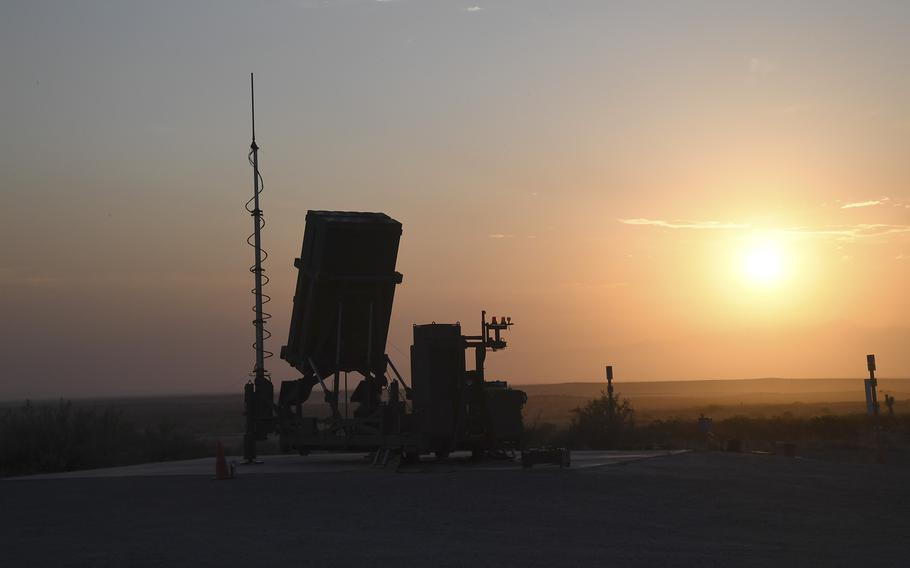 JERUSALEM — Moscow’s deadly air assault on Ukrainian cities that continued Wednesday has ramped up pressure on Western nations to rush air defense systems to the embattled country, but it is still unlikely to receive one of the world’s most effective tools against incoming projectiles.

Israel’s Iron Dome air defense, which boasts a 90 percent success rate against rockets fired against it, will stay out of Ukraine’s reach, experts said, as Jerusalem seeks to maintain strategic relations with Russia in Syria and other hot spots.

Israel’s Defense and Foreign ministries and the prime minister’s office uniformly declined to comment Wednesday on long-standing requests from Ukraine and its supporters for it to give, sell or loan Ukraine the system, including calls made since Monday’s barrage.

“Israel has great experience with air defense and Iron Dome, and we need exactly the same system in our city,” Kyiv Mayor Vitali Klitschko said in an interview Tuesday, a day after six residents were killed in the strikes. “We have been talking with them a long time about it. Those discussions have not been successful.”

Iron Dome uses radar-directed interceptors to blow hostile projectiles from the sky. Israel depends on it to shield civilians from rockets fired by militants in the Gaza Strip, with striking success. The system took down more than 97 percent of 470 rockets fired by Islamic Jihad forces in Gaza during a three-day escalation in August, according to the Israeli military.

Iron Dome is not designed to intercept the type of large, guided missile used in most of the barrages that killed at least 20 people in Kyiv, Lviv, Dnipro and other cities Monday, according to military experts in Israel and Washington.

But Ukrainians say the network could help shield residents from Grad and other smaller rockets that have destroyed apartment buildings, shopping centers and train stations along the shifting front.

“It will definitely be helpful because the Russians also send the drones, they send different kinds of rockets,” Klitchko said. Ukrainian President Volodymyr Zelenskyy warned Tuesday that Moscow was deploying almost 2,500 attack drones purchased from Iran.

The strikes pushed Ukraine’s air defense to the top of the agenda at meetings of NATO defense ministers this week in Brussels. Warding off Russian strikes, they said, will require a patchwork of systems targeting different scales of weaponry provided by multiple countries.

Since Monday, Kyiv has redoubled its requests for nations to respond. “Air defense is currently the No. 1 priority in our defense cooperation,” Zelenskyy said in a tweet.

NATO Secretary General Jens Stoltenberg beseeched member states to get more air defense capacity into Ukraine, and several said they are looking for ways to comply. Washington will send Ukraine two advanced surface-to-air missile systems “within the next several weeks,” a U.S. defense official, speaking on the condition of anonymity because of the sensitivity of the issue, said Monday.

Israeli officials declined to say whether the new initiatives will change the country’s stance on Iron Dome. Jerusalem’s reluctance, which has not shifted since the war erupted in February, has drawn the ire of Ukrainian officials, including its ambassador to Israel and, repeatedly, Zelenskyy.

“Everybody knows that your missile defense systems are the best,” Zelenskyy said while pleading with the Israeli parliament for aid in the spring.

“I don’t know what happened to Israel,” he said in an interview with French TV5 channel on Sept. 23. “I am in shock, because I don’t understand why they couldn’t give us air defenses.”

Israeli officials are largely mum, and reports have variously attributed their refusal to a lack of inventory and the system’s shortcomings against cruise missiles. But most analysts say the decision is driven by a perception that Israel cannot arm Ukraine directly without shattering its strategic cooperation with Russia in Syria and other hot spots that are a top priority for Israel.

“It’s just fear of Putin,” said Yossi Melman, a longtime intelligence analyst and commentator who has denounced Israel’s refusal to provide Iron Dome and other material aid as “morally oblivious.”

“It’s a shame,” Melman said. “We preach to the world about humanity and right and wrong but when it comes to our international positions it’s only our narrowest security concerns that are considered.”

Israel has come under fire for its response to Russia’s invasion from the beginning, when then-Prime Minister Naftali Bennett stood aside from the global condemnation showering down on Putin and instead put himself forward, briefly, as a neutral mediator.

Since then, Israeli officials point to the nonmilitary aid they have provided, including expediting the arrival of thousands of Jewish refugees from Ukraine, supplying noncombatants with body armor and operating a field hospital near the Ukraine-Poland border. And the country has become more critical of Russian actions, particularly since Prime Minister Yair Lapid assumed the top job.

“I strongly condemn the Russian attacks on the civilian population in Kyiv and other cities across Ukraine,” Lapid tweeted after Monday’s attacks. “I send our sincere condolences to the families of the victims and the Ukrainian people.”

U.S. officials did not immediately respond to requests for comment on Israel’s Iron Dome stance, and whether they would agree to a transfer. The system was developed with funding help from Washington and both governments have veto power over proposals to share it.

A congressional aide familiar with the issue said the administration apparently has not directly requested Israel to change its position, despite a general recognition that Iron Dome is the kind of “close-in system that could be effective there.”

“Ukraine has asked Israel, and Israel has refused to supply,” the aide said. “Whenever Congress has asked [the administration] on this they artfully dodge and say something like, ‘We appreciate any and all states willing to provide assistance.’ “

Missy Ryan and Kostiantyn Khudov in Kyiv and John Hudson in Washington contributed to this report.