Iran protests may distract regime from making trouble for US, allies in the Mideast 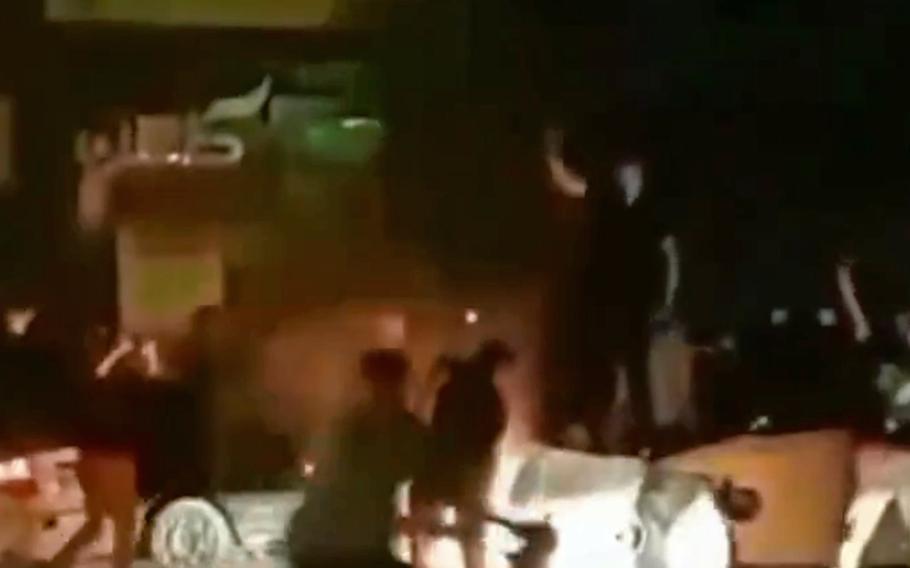 A screenshot of a video posted to Twitter purportedly shows people protesting in Iran. The death of a 22-year-old woman in police custody has sparked widespread demonstrations in the country, which is experiencing domestic turmoil as it seeks to negotiate a new deal with the U.S. regarding its nuclear program. (Twitter)

Protests roiling Iran in recent days are creating more volatility for the regime, and some analysts see a chance that the domestic turmoil will crimp Iranian support for proxy groups that attack U.S. allies in the Middle East.

According to reporting Friday by The Associated Press, more than a dozen cities have seen clashes with Iranian security forces after 22-year-old Mahsa Amini died in police custody. She was being held on suspicion of violating the country’s strict dress code.

“They have their hands full trying to put this down and maintain the regime,” said Eric Edelman, a senior fellow at the University of Virginia’s Miller Center. “These protests are likely to divert the attention of leadership from foreign policy, at least for a little bit.”

On Thursday, the U.S. Treasury Department announced sanctions on Iran’s morality police, which detained Amini and is being held responsible by the Biden administration for her Sept. 16 death.

Reports vary on the death toll and the extent of the protests. A Friday article in The Washington Post said more than 30 people have been killed.

According to a Fox News report Friday, demonstrations have occurred in all but one of Iran’s 31 provinces.

In a talk with reporters Monday at the Air Force Association’s annual Air, Space and Cyber Conference in Maryland, Lt. Gen. Alexus Grynkewich, the highest-ranking Air Force general in the Middle East, described the security situation in Iran as “in stasis” but added that there’s “always a danger that we would have another round of escalation.”

The protests also coincide with U.S. attempts to salvage a deal that would limit Tehran’s nuclear program in exchange for relief from sanctions.

But those efforts are considered at a take-it-or-leave-it inflection point, AP reported Thursday, with European Union officials warning that the window for securing a nuclear deal is about to close.

Conflict between the various countries allied with the U.S. and Iran-affiliated militias has been down in recent months in a pause that is “extremely tenuous,” said Naysan Rafati, senior Iran analyst for the Brussels-based International Crisis Group.

“Even before the most recent unrest began, there was a risk that Iran might directly or indirectly step up regional provocation against U.S. and allied interests, especially if the nuclear negotiations continued to flounder and both sides move toward more adversarial footing,” Rafati said.

However, considerable skepticism remains about the prospects for a drop-off in Iran’s malign activity in the region as a result of the demonstrations.

Experts say Iranian-backed groups such as Hezbollah and the Houthi rebels in Yemen can support themselves. Furthermore, they say, the elements of the Iranian government that deal with proxies are among the most powerful in the country.

“Is Iran’s leadership a bit distracted? Probably, but they’re not going to change their foreign policy,” said Barbara Slavin, the director of the Future of Iran Initiative at the Washington-based Atlantic Council. “It’s like saying, ‘If there’s massive protests in the USA, will the U.S. Special Forces be affected?’”

In addition, Iranian security forces seem to be taking the recent protests seriously, shutting off Internet access and cracking down violently on dissenters, analysts noted.

Tehran has seen many protests throughout the years, some of which more ferocious and widespread than the current ones, said Alex Vatanka, director of the Iran Program at the Middle East Institute in Washington.

“This regime has 43 years of perfecting the art of repression,” said Vatanka, who was born in Tehran.

While the current protests do not yet have a central leader, they are part of a larger trend of dissatisfaction in the country, he added.