Wells in the Nahr Umr oil field are seen from along the Shatt al Arab River, where a shepherd brought his sheep to graze in Basra on Aug. 19, 2022. (Younes Mohammad/Washington Post)

BASRA, Iraq — What happens when the land dries up?

The world is facing this question; Iraq is already learning the answers.

First the farmers and the fishermen try to stay. Then, one by one, they reach their breaking point. Migration starts slowly, but the exodus to towns and cities soon swells, and as temperatures rise, so do tensions.

The United Nations describes Iraq as the fifth-most-vulnerable country to climate change. Temperatures have increased by 13.2 degrees Fahrenheit in three decades, according to Berkeley Earth, well above the global average, and in the summers, the mercury now regularly hits 122 Fahrenheit. The heat is burning crops and desiccating marshes. As upstream dams in Turkey and Iran weaken the flows of the Tigris and Euphrates rivers, a salty tide is creeping north from the Persian Gulf, poisoning the land — and the jobs it once created.

In Iraq, especially the south, the changing climate is forcing families to sell off their livestock and pack up for urban centers such as the region's largest city, Basra, in search of jobs and better services.

But they find little welcome here.

When asked recently about the new arrivals, one Basra shopkeeper frowned in disapproval. "We don't get involved with those people," he said.

Embedded in Basra's troubles is a warning: As hotter, more-crowded cities become the future of a warming world, a lack of preparedness will only exacerbate the discontent already fraying the social fabric.

Basra was once one of Iraq's jewels, a thriving trade hub where the 14th-century traveler Ibn Battuta observed: "No place on earth excels it in quantity of palm groves." More recently, its freshwater canals and elegant walkways drew comparisons to Venice.

But decades of U.S.-backed sanctions and war, combined with the weight of corruption and neglect, have left Basra's infrastructure unable to adequately support the 2 million people the city already houses — let alone the rising tide of newcomers.

Oil powers Iraq's economy, and Basra is at the heart of where most of it is produced, but little of that money seems to trickle down to its inhabitants. Swaths of the city lack streetlights or paved roads. In 2018, the water supply was so polluted that it became toxic.

According to official figures, Basra province has a population of over 3 million — an increase of at least 20 percent in 10 years. And most of that growth has been in its urban areas.

Iraqi authorities have neither tried to connect a growing constellation of informal settlements in the cities to any service grid, nor taken meaningful steps to address the water mismanagement and scarcity that are causing the migration.

For longtime residents of the swelling cities, new arrivals often represent an extra strain on the already faltering infrastructure. Politicians have seized on blaming "infiltrators" — rather than their own failures — for the mess.

Across rural sweeps of the south, families say their migration is existential: Any chance of survival here is evaporating with the water. In a survey by the Norwegian Refugee Council last year, nearly 40 percent of farmers across the country reported an almost total loss of their wheat crop.

With each passing summer, families try new things to buy a few more years on their land. Abandoning one crop to focus on the survival of another, or last-ditch attempts to grow new ones altogether. In the town of Abu al-Khaseeb on a recent day, Malik Ali Abdulkareem crumbled a husk from his beloved okra plants between his fingers as he nodded toward a pile of metal carcasses on the river shore.

His sunburned arms had been further scorched by the cutting torch and one friend had lost a finger. The men also knew that their supply of broken ships wasn't endless.

Social media has been awash with photos showing water buffaloes lying dead on the cracked mudflats of southern Iraq's dried-out marshlands, and Abu al-Khaseeb's farm has been no exception. Many here have lost animals.

"There's no future here," farmer Ammar Jassim Mohammed said in a tone more exasperated than his friend's. "Everyone is leaving."

Accurate migration figures for the city of Basra are hard to come by, because in many ways, the newcomers live in the shadows: Their makeshift housing is built on parched land cut off from any water or electricity services, and aid groups say they are less likely to have access to the city's schools or health infrastructure.

In one recent survey, researchers from the United Nations' International Organization for Migration found that 12 percent of residents were newcomers who had settled in Basra over the past decade, mostly because of water scarcity and a lack of economic opportunities. The number is even higher in other southern Iraqi cities, such as Shatrah and Amarah.

Although measures such as better irrigation management, a hydraulic dam and a water treatment plant have been proposed to alleviate the region's water crisis, officials say there aren't enough funds.

"The ministries are neither serious nor fast. We've been discussing that dam since 2009," said Dergham al-Ajwadi, deputy governor of Basra province.

And as temperatures keep climbing, the flight from the countryside is only accelerating.

"The families bring blocks and plastic ceilings and then they build," said Kadhim Atshan, who oversees Dour al-Qiyada, a sprawling shantytown in Basra city built by waves of migration. "But then they find there aren't jobs, there's no services. They have to rely on themselves." 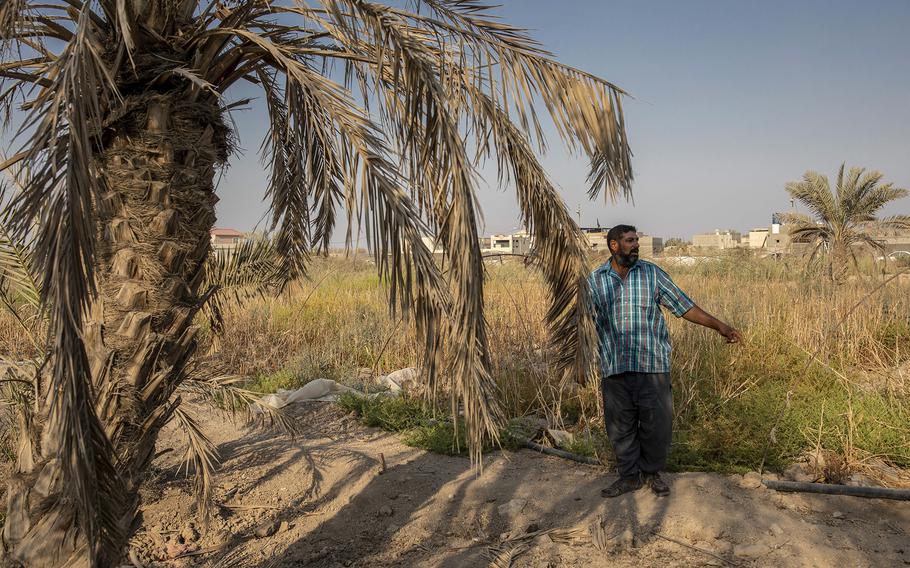 Farmer Malik Ali Abdulkareem, who lives in Abu al-Khaseeb, shows the damage caused to his farm by the salty river water near Basra. (Younes Mohammad/Washington Post)

On a baking hot night in the city's densely packed Hayyaniyah district, 45-year-old Raed Awdeh was at a loss as to how. He said he had moved to Basra the week before, but although his family had a roof over their heads, they had no idea what came next. "We don't know how to settle," he said, picking nervously at his thumbnail. The family of six would depend on his ability to find construction work, but he'd already suffered heatstroke on the job.

"We're suffocating," he said. "I'm finding work maybe one day out of seven. How are we going to manage here?"

But all across town, longtime residents had the same worries.

Qusay Ali, 40, said he had worked for the state oil company for three months before his job, along with hundreds of others, was terminated.

Now bills were mounting and he could barely afford to feed his family, even after pulling two daughters out of school. Hoping to get his job back, the father of five had joined protests outside Basra's state-run oil company at 5 a.m. each day — a last resort.

"What do you expect from a man who has told his girls they can't go to school anymore, a man who can't even pay for an operation that his father really needs," Ali said, in the sweltering old yellow-brick house his family shares with four others.

As he saw it, migration was only making the situation worse, and he felt that the slow tide of arrivals was changing his city. "Their mind-set is different; we don't know how to deal with them," he said. "They don't respect the laws here."

Decades of government neglect in rural areas, particularly in the education sector, have left many of the migrants illiterate. Farmers who grew up working the land often struggle to access the city's formal labor market and instead rely on temporary employment as construction workers or truck drivers, or hawking goods from carts in the street. And their habits and attitudes clash with those of their urban cousins.

The informal areas where they live also experience higher rates of crime, according to security officials. The head of Basra's investigative court, Ammar Shaker Fajr, estimated that about 60 percent of the drug cases it received involved arrests in the city's new shantytowns.

As the issue of newcomers grows more contentious, political leaders in southern Iraq have started blaming the city's crime rate — as well as other problems — on its migrants.

In 2018, the governor of Basra province, Asaad Abdulameer al-Eidani, gained popularity by barring legal residency in the city without proof of homeownership. In the years since, his pronouncements have sounded a steady drumbeat of hostility toward the newcomers.

That rhetoric has provided an escape valve of sorts for the city's politicians, who are increasingly unpopular. A few years ago, huge demonstrations decrying corruption and unemployment were crushed with deadly force. Since then, every summer has brought scattered daily protests over authorities' failure to provide basic services.

"Local politicians use the flow of immigrants to justify their poor governance," said Maha Yassin, a climate researcher at the Netherlands-based Clingendael Institute, who is from Basra.

When a raid against an alleged drug dealer turned deadly in the summer of 2019, Eidani vowed that the city would demolish "every home that harbors a criminal from outside the province," and said the action was for "the people of Basra."

"All the crimes in the city are being done by people who immigrated," he said in televised comments. "We need to stand against it."

But Yassin echoed what other officials in the province have long argued: that the marginalization of the people in the city's informal areas is pushing up the crime rate.

"This is how you drive these people into criminality, by discriminating," she said. "They move to irregular neighborhoods where there's no proper public services and no employment. And then social issues will emerge."

In Dour al-Qiyada, Atshan, the community leader, worried that the authorities' stance was making things worse.

"When they call them 'infiltrators,' the impact feels as bad as racial discrimination," he said. "No one provides us with anything. Trust me, everyone here is just trying to make a living."

When a heat wave forced the shutdown of Basra's power grid in August, the homes of newcomers and longtime residents alike were plunged into darkness as millions spent sleepless nights drenched in sweat. At midnight, it was still 100 degrees. The children were crying in Ali's cramped house, he said, and relations among the adults felt tense. In Awdeh's shantytown, the heat seemed to smother every breath he took.

Authorities blamed extreme heat and surging demand for the outages. But even when the grid was working again, residents of the home of Iraq's lucrative energy industry were still relying mostly on private generators that belched fumes as they powered the bare minimum: weak fans and white lights that flickered on the unsteady current.

Asked about plans to upgrade the grid, officials did not respond to requests for comment. But residents said that without improvements, they fear what future summers will bring.

Recently, as heat shimmered on the city's asphalt, a motorized rickshaw edged slowly out of a makeshift neighborhood and onto gridlocked roads. On the canvas of the rickshaw's cabin, the owner had summed up his situation.

"My dreams in this country are being lived by a dog in Europe," the neat white lettering read.

The Washington Post's Chris Mooney and Kasha Patel in Washington contributed to this report.