Afghan evacuees are being crushed by grief. A Philly agency is trying to help 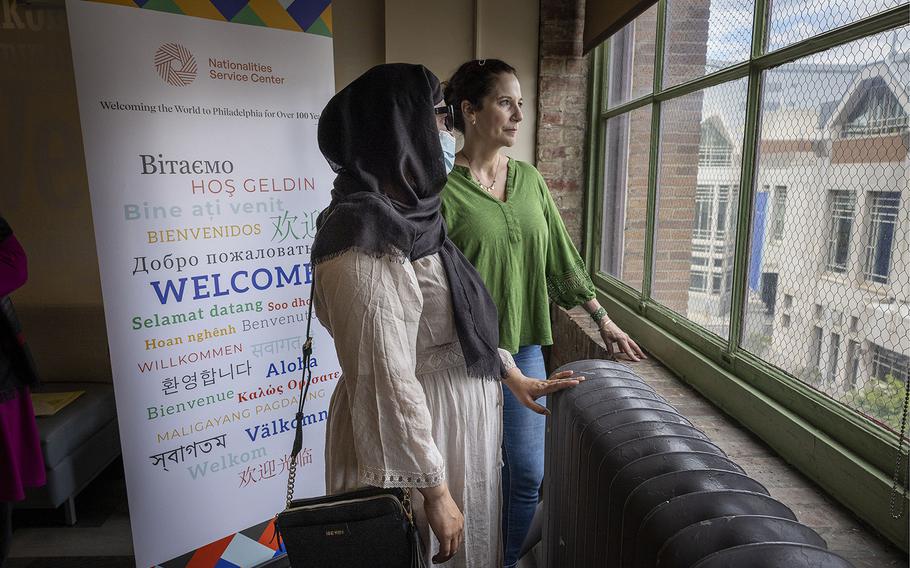 Karimi, 40, foreground, was evacuated from Afghanistan and resettled in Philadelphia with her her husband and 8-year-old son. Her 18-year-old son became separated from the family and was left behind. He is now in Taliban custody. Beside Karimi stands Gwen Soffer, the manager of wellness at Nationalities Service Center in Philadelphia, where this photo was taken. Karimi, who is being identified only by her last name, wears glasses to help shield her identity. (Alejandro A. Alvarez/The Philadelphia Inquirer/TNS)

PHILADELPHIA (Tribune News Service) — The Taliban has her son, she says. It’s starving him.

His captors have fractured his arm and beaten him, her beloved child, only 18.

Karimi, 40, tries to describe her torment. Can you imagine, as a mother, as a parent? Your son being broken, and you cannot help him? She’s 7,000 miles away in Philadelphia, after the U.S. military evacuation of Afghanistan, while her boy is tortured in a Taliban jail because his parents fought for the Americans.

“My brain is not working,” said Karimi, who asked to be identified only by her last name for security reasons. “I forget everything. Sometimes I’m thinking and nothing is in my brain, because I’m worrying too much.”

A year after the fall of Kabul touched off the largest evacuation since the Vietnam War, many Afghan arrivals struggle for peace of mind.

Studies show almost all refugees suffer some trauma in being wrenched from their homelands. But professionals who work with Afghan evacuees say many are plagued not by specific mental-health conditions, nor by anguish that peaks and slowly passes, but by unresolvable grief and anxiety over the loss of living children and spouses who could not get out.

NSC is trying a different way to help, connecting evacuees like Karimi with Afghan peer-wellness liaisons who provide emotional support and encouragement. They’re always available. And at the same time they try to keep clients moving forward in their transition to America.

“Some of the women I know left husbands behind, they left kids behind,” said liaison Pashtoon Akbari, who immigrated years ago. “They are more open to me. I understand what happened to them.”

Some clients may benefit from a traditional approach of therapy and medication, NSC said. But for others the stigma of treatment, the language barriers, and limited access to care — the pool of Dari- and Pashto-speaking mental-health professionals is small — demands a different approach.

Nik Ahmadi, an NSC wellness liaison who fought the Russians in Afghanistan, said he tries to help struggling clients by setting achievable goals.

Family separations cause the worst pain. But others endure loss of self-regard. One highly educated, accomplished client now gets offered front-counter jobs at Dunkin’ Donuts.

The man is depressed, Ahmadi said, but doesn’t want to take medication. They talk about objectives — to learn English? We’ll register for classes, Ahmadi told him. You won’t be fluent in a month or six months, but work hard and see how far you go in a year.

It’s not a cure, Ahmadi said, but it can keep people from getting mired in loss.

“That’s been the best intervention at this point,” said Gwen Soffer, who supervises clinical and trauma-informed programs as NSC’s manager of wellness. “To have the community and people around who are checking on them, speak the same language, understand the complexity of the situation.”

Peer liaisons have been used primarily to help people recovering from substance abuse, more recently spreading into care for refugees.

“Many immigrant and refugee communities, they are not going to show up at the door of the psychiatrist or the psychologist,” said senior director Shanfeld. “But having a peer who has been through the same experience [can] make an impact.”

Karimi said the intervention has helped, providing space for her to talk in depth about her son’s captivity.

She and her husband fought 15 years on the American side in Afghanistan. Her job was to scout Taliban hideouts during the day, moving unnoticed in common clothes, then return with other soldiers at night and shoot them.

That allegiance made her family a target — and a priority for evacuation as the United States withdrew and the Taliban took over on Aug. 15.

The Kabul airport was chaotic, with thousands pressed against exterior gates.

Troops fired tear gas to keep from being overrun, Karimi said. She and her family staggered, half-blind and gagging. Her younger son, 8, fell down.

Her older boy went to find water for his brother. A moment later, the soldiers pulled Karimi, her husband, and their 8-year-old into the airport.

The elder boy returned to find the family gone.

Karimi remembers standing beside the American soldiers, all of them shouting at her son to come forward. Each could see the other, but the crowds stood like walls.

For a week the youth tried to reach them. Finally the soldiers told the family to board and go. They were flown to a first-stop center in Qatar and then to the United States, living with thousands of evacuees on Joint Base McGuire-Dix-Lakehurst in South Jersey.

“I tried to bring you here,” Karimi told her son by phone.

He was arrested four months after the evacuation.

It was in the crush outside the airport that spouses and children were pushed apart. Sometimes it was parents left behind — 1,300 Afghan children arrived in this country alone.

“Part of the trauma we’ve seen in the larger population is that so much of their family remains in harm’s way,” said Krish O’Mara Vignarajah, president and CEO of Lutheran Immigration and Refugee Service in Baltimore.

NSC resettled about 600 people in the Philadelphia area. Nearly a third have been separated from a close family member.

So far there’s not much research on the mental health of the 76,000 Afghans brought to this country. But some of what’s known is concerning, said Joseph Azam, board chairman of the national Afghan-American Foundation.

“As people settle in, there are issues that are emerging, including the deaths of young people,” he said.

In May, months after his family fled Kabul, a 14-year-old Afghan boy killed himself at his Missouri high school. Reports said Rezwan Kohistani, the only evacuee among 1,300 students, had been skipping classes and struggling with English, and was reprimanded for text messaging although his phone was his only means to translate.

For one, it came suddenly, forcing people to flee with the clothes on their backs. For another, those who escaped were moved to new countries almost immediately.

No one should spend years in refugee camps, advocates say, but some time for adjustment can be helpful. It allows people to think and decompress, and to learn some of the language and customs of their home to be.

Karimi has not been able to speak to her son since he was jailed. Her sister in Afghanistan managed to visit him. His daily food consists of a piece of bread and cup of water.

“My brain gets damaged when I think about it,” Karimi said.

Her 8-year-old overheard her discussing the horror of his brother’s hunger, and now, in sympathy, refuses to eat.

Taliban intermediaries tell Karimi to return to Afghanistan. She can trade herself. They’ll free her son.

Some days she’s determined to go.

But friends including Akbari, the peer liaison, tell her no. She’ll be taken prisoner, and her son kept as well. Karimi knows that’s true, but sometimes surrendering herself seems the only chance.

“We did work with the government, and with the foreign people, and this is the result we are getting,” she said. “I don’t know what’s going to happen in the end.”