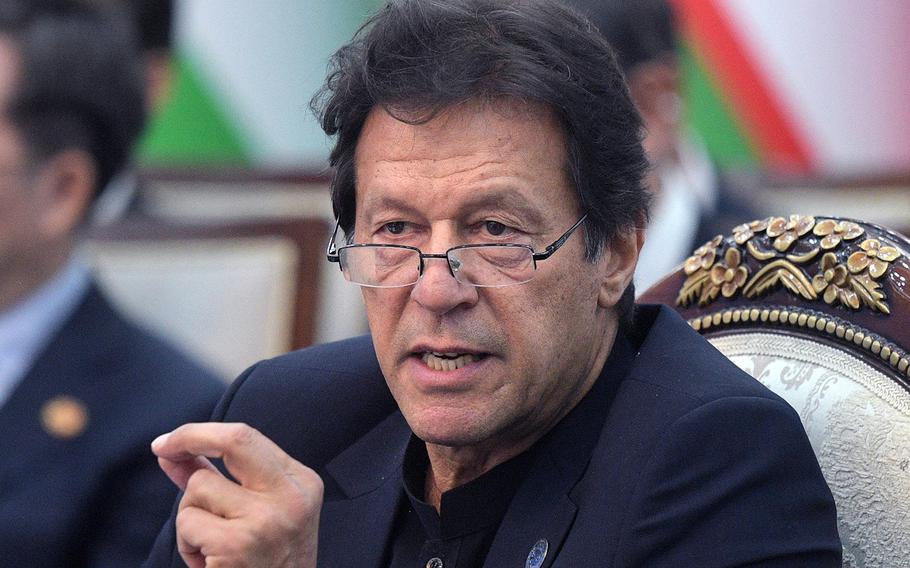 Pakistan’s Prime Minister Imran Khan attends meeting in Bishkek, Kyrgyzstan, on June 14, 2019.  A Pakistan court on Tuesday, Aug. 23, 2022, ordered Khan to appear before it next week as it reviews whether remarks he made about the judiciary merit a contempt of court case. (Alexei Druzhinin, Sputnik, Kremlin Pool)

(Tribune News Service) — A Pakistan court has asked Imran Khan to appear before it next week as it reviews whether remarks he made about the judiciary merit a contempt of court case, the latest in a string of legal troubles for the former premier.

Separately, the government has said it is seeking legal advice on whether to pursue action on a police complaint filed under the country's anti-terror laws after the speech by the ousted prime minister Saturday targeting state institutions, including the judiciary and the police. Khan has been asked to be in court on Aug 31.

The South Asian nation has witnessed political turmoil since Khan's government was pushed out in a no-confidence vote in April. The cricket star-turned-politician has been demanding early elections as he draws massive crowds to his rallies across the country. He has blamed the current government, led by Shehbaz Sharif, of colluding with the US and the country's powerful military to force him out. All three have denied the allegations.

The political drama threatens to undermine Pakistan's quest to convince the International Monetary Fund to release $1.2 billion at a board meeting later this month. Islamabad is also seeking aid from friendly nations to fill its financing gap as it deals with faltering foreign-currency reserves and one of Asia's fastest-inflation rates.

Tuesday's court order is just one of many hurdles Khan and his Pakistan Tehreek-e-Insaf party are looking at. The country's election commission has ruled the PTI received illegal funding from overseas, a charge the party plans to appeal.

The current government has barred TV channels from airing Khan's speeches live and shut down a channel seen loyal to his party. Khan, 69, has criticized the government's action and said it is violating free speech.

A top Khan aide has also been arrested on charges of sedition for televised comments he made urging army troops not to accept any illegal order from the top military leadership.

However, Khan's defiance of Sharif's government and the army appears to have only boosted his popularity on the streets of Pakistan.

His supporters gathered in Islamabad on Sunday night following reports he faced likely arrest after a complaint over the weekend's speech was formally filed with police in Pakistan's capital, local media said.