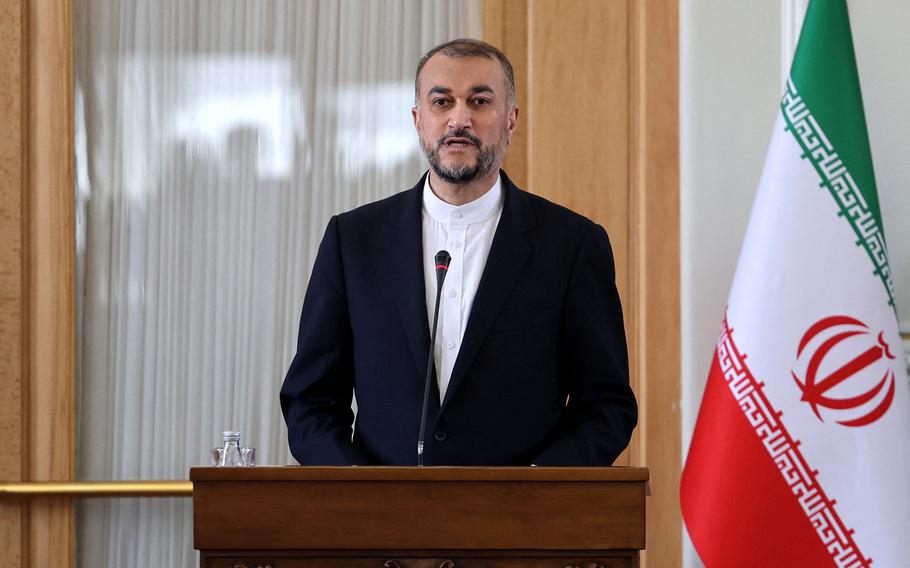 (Tribune News Service) — Iran sent the European Union its official response to the bloc’s proposal for reviving the 2015 nuclear accord after signaling it may be nearer a deal with the U.S. that could restore Iranian oil exports to global markets.

The semi-official Iranian Students’ News Agency, citing an “informed source,” said Tehran’s position on the latest draft text had been sent to the E.U.’s top envoy, Josep Borrell. The Islamic Republic expects a reply in the next two days, ISNA said, without giving any more details.

Earlier Monday, Iran’s Foreign Minister, Hossein Amirabdollahian, said an agreement can be reached with Washington to restore the beleaguered accord in the next few days “if the U.S. shows a realistic approach and flexibility.”

Oil extended losses as traders weighed the prospect of more Iranian supply and concerns about Chinese demand. West Texas Intermediate dropped near $87 a barrel, falling as much as 5.7%.

“We’ve clearly told the U.S. we’re ready to enter the phase of announcing the deal, and have a meeting of foreign ministers in Vienna on final conclusions, if our latest points are met,” Amirabdollahian told reporters in a briefing in Tehran.

But he added “if the U.S. response is to repeat their domestic miseries and try to gain concessions, we’ll have to talk and negotiate more.”

Asked to respond to the remarks and the European Union proposal, State Department spokesman Ned Price said Monday the Biden administration planned to share its views privately with Borrell. Last week, the bloc proposed a “finalized” draft text, which it said represents the last remaining hope of rescuing the deal.

“We do agree, however, with his fundamental point — and that is that what could be negotiated has been negotiated,” Price said.

Additional oil from Tehran may come as a welcome relief for consumers, who’ve been hit by record fuel prices this summer as global output struggles to keep pace with the post-pandemic rebound in demand. Crude supplies have come under extra strain as companies switch from expensive natural gas to oil in power generation, and as international sanctions disrupt flows from Russia.

The Trump administration abandoned the nuclear pact in 2018 and gradually reimposed sanctions on Iran’s economy, including its oil sales, fueling tensions across the Persian Gulf. Tehran responded by stepping up its uranium enrichment to near levels that are required for a weapons program.

Amirabdollahian hinted his country was willing to make concessions. Iran was ready “to lose some things on the nuclear side to gain some things,” he said. That comment could suggest a softening of earlier positions related to international nuclear inspections that had deadlocked the latest round of talks.

Iran’s leading hardline newspaper, Kayhan, which is broadly seen reflecting the positions of Supreme Leader Ayatollah Ali Khamenei, said in an editorial that “murmurs of an agreement can be heard from all corners.” Other news outlets in Iran interpreted that as a sign that a deal has the top cleric’s approval.

Negotiations with world powers have dragged on for almost 18 months, dogged at various stages by political squabbles over terrorism sanctions, Iranian demands for guarantees the U.S. won’t again renege on the deal, Russia’s war on Ukraine and inspections by the International Atomic Energy Agency.

Even as there were signs of progress toward a diplomatic deal, events elsewhere have underlined the enmity between Iran and the U.S.

In the past five days, the U.S. charged an Iranian national with planning to kill former presidential aide John Bolton in retaliation for Washington’s deadly drone attack on a top Iranian general in January 2020, while U.S. officials have condemned Iranian hardliners for celebrating last Friday’s violent knife attack on writer Salman Rushdie.