Beneath Kabul's surprising veneer of normalcy, a precarious balancing act 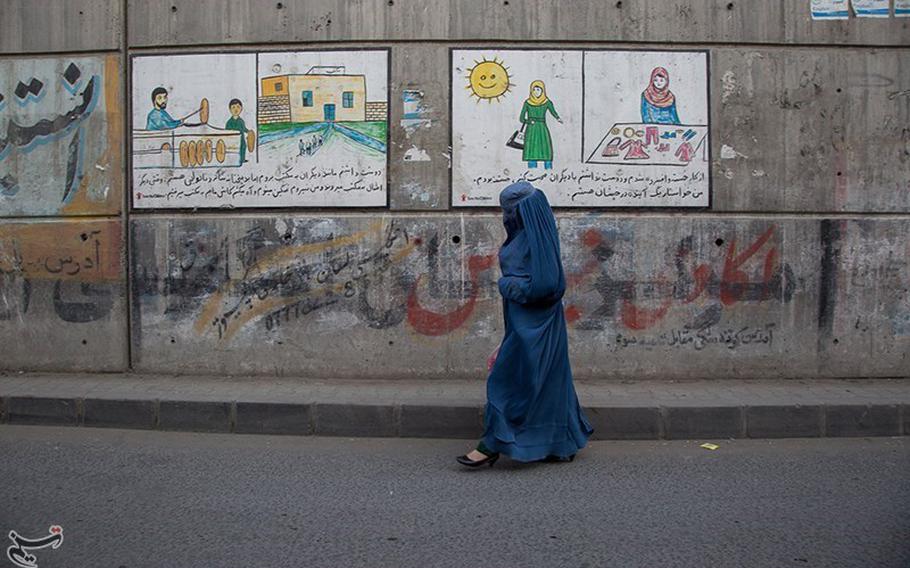 A woman clad in a burqa walks past a building in Kabul, Afghanistan in September 2021. The Taliban regime in Afghanistan, hoping not to further alienate foreign donors, has been sending out muddled signals rather than ironclad orders on controversial topics, especially women’s rights. The citizenry, hoping to get through another hard day without crossing an unpredictable red line, is mostly lying low. (Tasnim News Agency/via Wikimedia Commons)

KABUL — An uneasy calm has settled over the Afghan capital this summer, a wary detente between the country's stern religious rulers and a deflated, worried populace that is struggling to survive but also relieved that the punishing 20-year war involving foreign troops is over.

Both sides have been trying to maintain a precarious balancing act. The Taliban regime, hoping not to further alienate foreign donors, has been sending out muddled signals rather than ironclad orders on controversial topics, especially women's rights. The citizenry, hoping to get through another hard day without crossing an unpredictable red line, is mostly lying low.

But as the first anniversary of the Taliban's return to power approaches next week, the balancing act has become harder to sustain. A series of violent attacks in the capital have belied the regime's assertions that it can keep the public safe, while the Taliban's shifting explanations for keeping teenage girls out of school have left thousands of families frustrated and angry.

In poor city neighborhoods, life seems to go on as normal. The summer nights are hot, and the power fails often. Men sit on cement stoops and stroll toward corner mosques when the evening call to prayer wafts through the muggy air. Children chase one another in the streets. Burqa-covered women huddle beneath bakery windows, begging for a piece of bread.

But gradually, the capital that had swelled to 4 million just two years ago is hollowing out. Downtown, choice parking spots sit empty and clusters of drug addicts are taking over the sidewalks. Gone are the traffic jams that once inched ahead while small boys darted among cars like fish, attempting to wash windshields for pennies.

The illusion of postwar security has collapsed. First, on July 31, an American drone missile struck a house in central Kabul, its tremor felt for several miles. Soon afterward, President Joe Biden announced that the strike had killed the leader of al-Qaida, which the Taliban had agreed to ban in its 2020 peace deal with U.S. officials.

Then, over the next several days, a spate of terrorist attacks in Kabul's Shiite Muslim community — including a bomb hidden in a flowerpot and gunfire from an apartment building — shattered hopes that after years of persecution, Shiites could gather outside without fear to observe Muharram, a month of mourning for Imam Hussein, grandson of the prophet Muhammad.

"We used to think of the Taliban as a faraway monster. Now the monster is here, in charge of the government, so it is their responsibility to protect us. People feel more confident," Safar Baqri, 32, said two weeks ago as he hung up colorful banners to sell during Muharram.

But by last weekend, scores of people in the area had been killed or wounded. Thousands of banners were taken down by the police, traffic was banned and the streets were empty except for Taliban forces in armored trucks. Community leaders angrily accused the authorities of "canceling" their sacred rite instead of safeguarding it.

"We took many victims to hospitals, some missing legs or arms, some with shrapnel in their stomachs, some with burned faces," an ambulance driver named Syed Ali, 55, recounted after a bomb exploded Aug. 6 near a major intersection. "We tried to get all their names, but some were too injured to speak."

The drone strike, in contrast, harmed no local residents, damaged a single house and targeted a foreign-born militant — Ayman al-Zawahri — who was little-known to many Afghans. But it sparked a surge of public anger at the United States that had receded since the withdrawal of foreign troops last August.

There were defiant tweets on the internet, mocking the Taliban regime for failing to retaliate. There was an anti-American rally in Kabul, with Taliban security escorts and marchers holding up perfectly lettered placards in English saying "Down with America."

For the most part, though, the capital soon settled back into a familiar, glum routine of making do with far too little. In conversations over the past several weeks, people from all walks of life said they were mostly trying to get through each day — and avoid thinking too far ahead into an uncertain future.

In central Kabul, a line of haggard-looking men formed outside a World Food Program depot and stretched along several city blocks. Nearby, other men waited with battered wheelbarrows, hoping to earn a few pennies lugging supplies of wheat, sugar and cooking oil to people's homes.

"This is my third time here," confided a dignified man in his 60s named Khalid Aziz, who said he had spent 25 years teaching Persian literature to high school students. "This country has suffered a tragedy, and we are all just trying to survive it," he said. "We are afraid for the future of our children, and we have no hope for tomorrow."

A few blocks away, a glittering bridal shop sat empty. The carpeted showroom featured shapely mannequins in sequined, imported gowns, but their faces had been covered by masks or wigs, in obedience to Taliban instructions. The owner, Sayed Hussain, said he had few customers now, because most brides could afford only simple dresses stitched by local tailors.

As with the partly covered mannequins, Taliban officials have taken other half-steps to implement their strict Islamic code without turning the public against them. Weddings, the social glue of Afghan society, were already divided into separate rooms for males and females. The regime has allowed weddings to continue but banned live bands, known for earsplitting, amplified vocals and drums.

The Taliban administration has also been working to modernize its bureaucracy and soften its international image. Government ministries now include trimly dressed professionals and spokesmen. Many are Talibs, but they bear little resemblance to the scowling figures with bristling beards and Kalashnikov rifles who ran the country in the late 1990s.

At the international airport, arriving passengers are whisked through once cumbersome immigration lines, and uniformed female officers stamp passports in booths adjacent to their male counterparts — even as the regime has banned women from most public jobs except at hospitals and detention centers for women.

Inside a gleaming bank, foreign cash transfer services, until recently blocked by international sanctions, are processed efficiently by technicians sitting behind computer screens. The premises are spotless and the scene far more orderly than the scrums of pre-Taliban days.

Outside, many women shop with their faces exposed, seemingly without fear of punishment, even though the regime has instructed those of childbearing age to veil themselves in public or, preferably, not leave home at all. New rules also forbid women to travel long distances without a male chaperone.

Officials refer to these orders as mere "guidance," and there have been no reports of women in the capital being beaten for dressing immodestly. But in rural areas, religious officials have begun meting out severe punishments to both criminals and moral offenders. In Zabul province, authorities recently announced the public whippings of two thieves and an adulterous couple.

Such mixed signals have roiled public opinion on the most sensitive issue of the day: whether and when the Taliban will allow girls above sixth grade to attend school. Since May, when the regime abruptly reneged on its pledge to let older girls back in class, officials have offered various explanations: The curriculum needs to be revised; religious scholars are divided; some rural men do not want their daughters to leave home.

The year-long wait has been a growing source of anguish and frustration for families in Kabul, whose teenage daughters have sat home for months — and whose younger ones dread what will happen when they finish sixth grade.

"I feel so sad for my daughter," said Ghulam Haider, 38, an engineer who lost his job with a foreign construction company when the Taliban took over. As the family gathered in their parlor one recent evening, 13-year-old Samia sat shyly on a sofa, looking downcast.

"She loves school, and she is so bright," Haider said. Although many of their friends have left the country, the family had been planning to remain. "We wanted to see Afghanistan become peaceful and begin to prosper," he said. "But now, for the sake of her future, we are thinking about leaving, too."