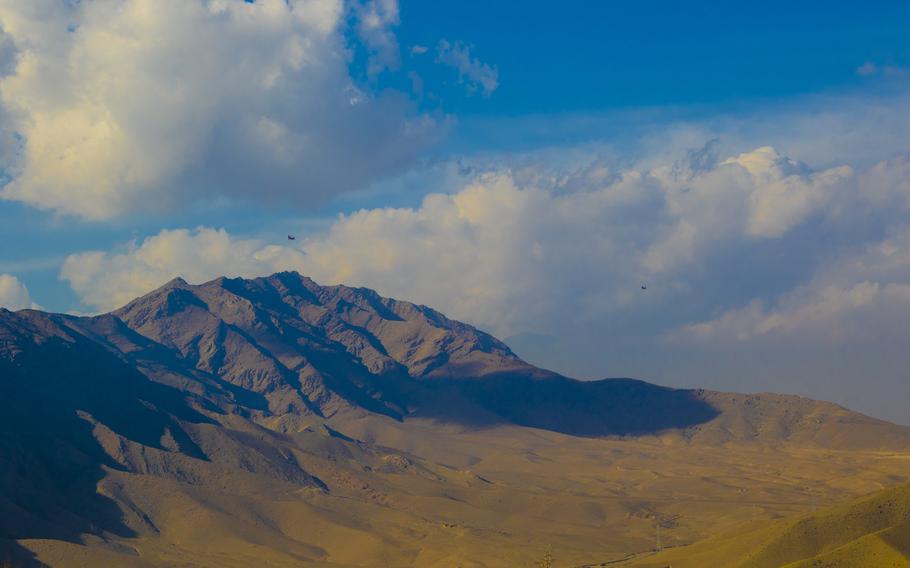 KABUL - Rustam Haidery, 22, was watching a TikTok video in his bedroom Wednesday morning when a bullet smashed into the window ledge above his head. Leaping up, he saw uniformed Taliban forces setting up barricades in the street below. From a 12-story apartment building on the next block, he thought he heard someone crying for help.

Soon, heavily armed men were knocking on neighbors’ doors, charging up stairs, and taking up positions on nearby balconies and rooftops. Gunfire was coming from several directions. Haidery and his family decided to flee and soon found themselves in a stream of residents hurrying away from the danger.

“The children were scared, but the police escorted us out of the area until we could find a car,” Haidery said Thursday morning, soon after the family returned home. He recalled hearing as a child that the Taliban extremists, who held power in the late 1990s, were bullies and killers. This time, he said, they seemed different. “They are in charge of the government, and they know they have to protect people.”

The battle raging that day, which would stretch to more than seven hours, was a high-stakes confrontation between Taliban forces and a group of commandos from the Islamic State, a rival Sunni Muslim militia that views Shiites as apostates. It has attacked the mostly Shiite Muslim minority district of West Kabul many times over the past eight years.

The clash also came at a moment of particular tension and vulnerability for the country’s rulers, who were already facing an economic and humanitarian crisis. On Sunday, a U.S. drone strike slammed into a house in a highly secured area of central Kabul, killing al-Qaida leader Ayman al-Zawahri. The stunning attack embarrassed Taliban leaders and threatened to shatter the U.S.-Taliban peace deal in 2020 that had ended two decades of conflict.

Since the Taliban returned to power last August, the Islamic State offshoot group known as Islamic State-Khorasan has increasingly challenged the regime’s ability to provide security. In April, the group bombed a high school and a crowded Sufi shrine in West Kabul, as well as mosques in two other cities, leaving scores dead and wounded. This time it attacked during the Shiite festival of Muharram, a 10-day celebration that Taliban security officials had made extra efforts to secure.

All Wednesday afternoon, as gunfire erupted intermittently in the working-class neighborhood, the drama was hidden from public view as Taliban forces cordoned off the entire West Kabul sector with dozens of roadblocks. But rumors spread quickly that the attackers had commandeered the orange high-rise apartment building, Karte Sakhi Tower, and taken several families hostage, firing at the Taliban forces from inside and preventing them from freely responding.

Finally, just after 6 p.m., Taliban security officials announced that the siege was over. They said at least four Islamic State attackers had been killed and one captured. They also said two Taliban forces had died, including one female officer, but that no civilians had been harmed. They did not explicitly acknowledge that any families had been held hostage but said they had “conducted the operation with precision” to avoid civilian casualties.

“These evil elements were hitting civilian targets in Kabul and other parts of the country,” the statement said. “With the help of God, we managed to eliminate them.”

That evening, ToloNews aired a grainy, long-distance video showing Taliban forces hurling dynamite over a ground-floor wall of the apartment complex, watching the wall explode in a cloud of debris and then hurrying a group of hunched-over civilians away from the site.

The news that the attackers had been thwarted was met with relief across the large West Kabul community, home to several hundred thousand Shiite and ethnic Hazara minority members, where initial activities for Muharram had been abruptly halted. The spate of bombings in April had previously drawn angry protests from Shiite leaders and activists, who mistrusted the Sunni leaders’ commitment to protecting them.

This time, police made extra efforts to secure the community for Muharram, coordinating with local leaders and patrolling the area frequently. In interviews last week, many residents said they felt more confident about their safety than in previous years. Then, word suddenly came Wednesday that a Taliban security team making a safety sweep had come under fire from the high-rise building, just two blocks from the majestic, blue-domed Karte Sakhi shrine that draws thousands of people during the 10-day festival.

By early Thursday morning, though, calm had returned and Muharram festivities were starting up again. Both Shiite and Sunni residents near the shrine praised the Taliban forces, saying they had fought hard to stop the terrorists in their midst. People brought tea and bread to police guarding access to the Karte Sakhi Tower, which was now empty, pocked with bullet holes and surrounded by security tape. Shuttered shops reopened and families trickled back after spending the night with relatives.

“They sacrificed themselves for us, they evacuated all the homes safely and they prevented a big tragedy,” said Mohammad Farhad, 48, a former school administrator who lives one block from the tower. “There was a lot of fear at first, but now people are coming home peacefully.”

A few blocks away, a man putting up a stand to offer free juice and milk, decorated with colorful banners for Muharram, said he was happy that the attackers had been stopped but still worried they would try again next week, during the festival’s final days known as Ashura, when public emotions peak amid penitential parades and dirges booming from loudspeakers.

“The Taliban made good on their promise. Everyone saw that, and everyone feels less scared now,” said Sayed Mansour, 26. “On the other hand, Muharram is not over yet.”