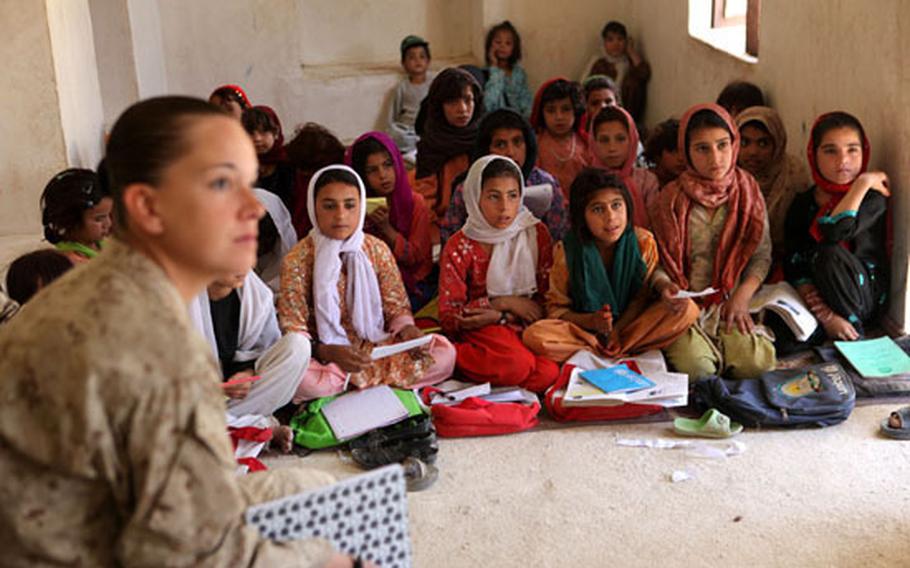 Afghan girls ranging from five to 12 years old in Nowzad, Afghanistan, attend a class on June 8, 2010. They have only one male teacher and only regularly attend school 3 hours a day. In a report last week, the rights group Amnesty International said Afghan women and girls are enduring a “suffocating” crackdown by Taliban authorities, restricting their rights to free movement and education and leading to rising rates of forced marriage of girls. (Shawn Coolman/U.S. Marines)

KABUL, Afghanistan — Millions of Afghans are expected to experience “extreme levels of hunger” in the coming months, while foreign aid agencies here face a significant decrease in food and emergency provisions because of shortfalls in funding, according to a report released Monday night by the U.S. Special Inspector General for Afghanistan Reconstruction.

The watchdog agency said Afghanistan’s humanitarian crisis remains “dire,” with 18.9 million people facing “potentially life-threatening” hunger and up to 6 million facing “near-famine conditions.” But it said that emergency aid is likely to fall sharply through November, reaching only 8% of the population, because insufficient foreign funds have been donated to relief agencies including UNICEF and the World Food Program.

The report, which comes nearly a year after U.S. forces withdrew from Afghanistan, also warned that the plight of Afghan women is continuing to worsen since Taliban extremists returned to power last August. The quarterly inspector general’s assessment, which has previously focused on fraud, waste and other problems with U.S. military and civilian involvement in Afghanistan, this time singled out Taliban suppression of women as a major concern.

This warning echoed new alarms being raised over deteriorating conditions for Afghan women by other international agencies. Last month, the U.N. Assistance Mission in Afghanistan sharply condemned an array of Taliban policies that it said “make women effectively invisible.”

In another report last week, the rights group Amnesty International said Afghan women and girls are enduring a “suffocating” crackdown by Taliban authorities, restricting their rights to free movement and education and leading to rising rates of forced marriage of girls.

The inspector general’s report opened with a lengthy section headlined “Taliban Repression of Women and Girls Grows.” It criticized Taliban officials for backtracking on pledges to restore female freedoms — in particular the regime’s “abrupt” reversal in March of its announced plan to reopen girls’ shuttered high schools.

That turnaround, which some analysts have attributed to internal disagreements among Taliban leaders, further dashed international hopes for serious change in Taliban attitudes. Since then, the report noted, Taliban authorities have issued numerous rules that further restrict women’s rights to engage in activities outside their homes.

In May, a decree from the Ministry for the Promotion of Virtue and Prevention of Vice — a once-feared entity during the first period of Taliban rule — said that women should wear a burqa or cover their faces when in public, and that it would be “best” for them not to leave home at all. Another decree banned women from long-distance road and air travel unless chaperoned by a male relative. A third required female TV presenters to cover their faces on air.

So far, these rules have not been regularly enforced by physical punishments, as was common during the previous Taliban era in the late 1990s. Taliban officials have described them as “guidance” rather than mandatory orders. They have also repeatedly stated that they will ensure all rights for women according to Islamic sharia law, and that foreigners do not have the right to intervene in Afghan religious and social traditions.

The issues of continued humanitarian suffering and restrictions on women’s rights in Afghanistan are closely intertwined. The impoverished country of 39 million has suffered a devastating economic decline since August of last year, when Taliban forces took power, prompting the withdrawal of most foreign aid and the U.S. seizure of more than $9 billion in Afghan assets.

Legal exemptions have allowed some funds to reach foreign aid groups, but they have met only a small fraction of the need. According to the inspector general’s report, Afghans will face a nearly 60% increase in food insecurity this fall compared with the same period last year. It said that the United Nations is seeking to raise $4.4 billion for humanitarian aid to Afghanistan, and that nearly half has been pledged, but only $601 million has been confirmed.

Wahidullah Amani, a spokesman for the World Food Program in Kabul, said the agency needs to raise $900 million to keep operating for the next six months, before winter snows block the roads to poor rural provinces. The group holds frequent distributions of wheat, beans and cooking oil in Kabul and other cities, where long lines form early and last all day.

A major demand of foreign donors and governments is that the Taliban, which is desperately seeking international recognition and restored aid, must prove it will respect women’s rights, as well as human rights in general. While some colleges are open to women under strict gender segregation, and girls may study up to sixth grade, the continued lack of access to jobs, education and public activities has been especially frustrating to Afghan women who studied, worked and participated in public life during two decades of civilian rule.

U.S. Secretary of State Antony Blinken, speaking Thursday in Washington at the launch of a consultative program with Afghan women’s groups, said the Taliban had “reversed a great deal of the openness and progress” made in recent years, stifling civil society and the press. “Perhaps most notably, they failed to respect the human rights of women and girls,” he said. “Instead, under the Taliban, women and girls have largely been erased from public life.”

Blinken said the Taliban’s decision in March to ban girls from secondary schools — even as some were “literally walking to school and others were already sitting at their desks” — was a “reversal of commitments they made to the Afghan people and the world. . . . It’s a terrible, terrible waste.” He said U.S. officials will “continue to urge the Taliban to reverse their decision.”

In Kabul and other cities, female activists have tried to fight back, holding numerous protests against new restrictions, but some rallies have been suppressed by police and none have made concrete gains. On the streets of the capital, women are able to shop with only their heads covered and there is no sign of armed Taliban morality enforcers. But in rural areas, rights groups have reported Taliban officials carrying out severe punishments — including lashings and stonings — for girls or women who elope, flee abusive homes, defy forced marriages or have illicit sex.

The U.N. Assistance Mission in Afghanistan, in a June report, described incidents of “cruel and degrading” Taliban punishments for moral offenses in rural provinces, similar to those meted out in the past. In one case, a man and a woman were reportedly stoned to death in Badakhshan province for having an extramarital affair.

Another blow to hopes for women’s rights came in June, when Taliban officials held a consultation on national issues with 4,500 religious clerics and tribal leaders. They did not allow women to participate, saying they would be represented by male delegates. The inspector general’s report said that while some participants supported girls returning to school, there was no formal discussion or recommendation on the subject.

Deborah Lyons, the U.N. special representative to Afghanistan until June, made a departing plea to the international community to pursue an “engagement strategy” with the Taliban to persuade its authorities that a system that excludes women and minorities “will not endure.” But the inspector general’s report said recent Taliban actions hold out little chance that an international carrot-and-stick effort will have any success.

“Sadly,” the report concluded, “neither increasing international isolation, nor worsening economic and health crises, nor the growing desperation of ordinary Afghans, seem to have deterred the Taliban from reinstating many of their repressive policies of the 1990s.”