AL-TANF GARRISON, Syria — A burst of Russian and Iranian maneuvers against U.S. interests in the Middle East has forced the region’s new military commander toward an early reckoning over how to reestablish deterrence without sparking a wider conflict, a perennial problem that has taken on new urgency amid the global instability ignited by Moscow’s war in Ukraine.

Army Gen. Michael Erik Kurilla, who took charge of U.S. Central Command this spring, met in late June with dozens of the approximately 300 soldiers, Special Operations forces and foreign trainees stationed at this sprawling base in eastern Syria. The high-level visit occurred just days after Russian fighter jets attacked a combat post operated by Syrian opposition fighters inside the garrison. Russian military officials, citing a purported vehicle explosion they claimed had wounded Syrian government troops, notified the Americans of their intent 35 minutes prior, according to a U.S. military official.

The Biden administration is presiding over a unique moment, as familiar threats like those posed by Iran and its proxies have, in ways, been overshadowed by Russia’s aggressive posture toward Europe and China’s quest for regional dominance in the Pacific. As the U.S. government looks to reprioritize, key Middle Eastern allies — including Saudi Arabia, the United Arab Emirates and Israel — are growing impatient, acutely aware that Washington’s attention and war capital are being drawn elsewhere.

It has given new urgency to a classic strategic challenge: How much harassment is the United States willing to tolerate, and how can it deter adversaries from testing Washington’s red lines?

“The biggest question U.S. policymakers have to wrestle with is that at some point, the Emiratis, Saudis, Israelis and other Middle Eastern allies, if they don’t believe that the United States is going to deter Iran on its own, they’ll be looking for ways to deter Iran by themselves,” said Raphael S. Cohen, who researches military strategy and doctrine at the RAND Corporation.

No U.S. personnel were harmed in the Russian strike on Tanf. But that was little solace to Kurilla, who characterized the incident as part of a wider attempt by U.S. adversaries to assert dominance in the region while betting that the United States will not mount a kinetic response.

“They’re going to push to what they think our limits are going to be and then reestablish our red lines,” Kurilla told those assembled in the bright morning desert sun. 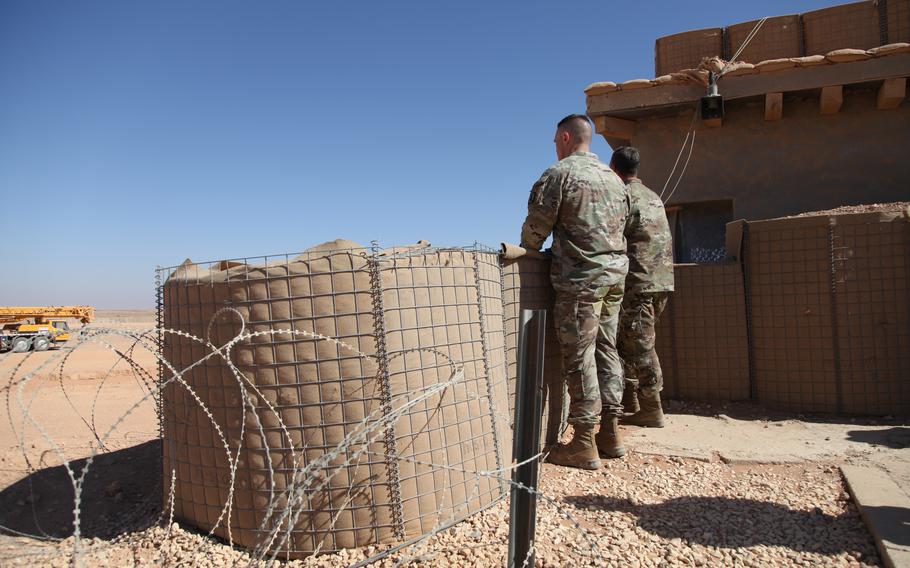 “We’re ready to come off the leash whenever the time comes,” one U.S. service member interjected.

Kurilla cracked a smile. “I have no doubt,” the general replied.

The month of June saw multiple instances of what U.S. military officials have decried as “provocative,” “escalatory,” or “unsafe and unprofessional” acts by Russia and Iran.

In addition to the strike here at Tanf, U.S. officials said they documented Russian aircraft menacing U.S. military planes over Syria through maneuvers that failed to adhere to long-established deconfliction protocols requiring that both sides assent to, not simply warn each other of, planned operations that could put either country’s personnel or interests in danger. Central Command declined to offer further details to bolster its claims.

The brush with Russia has coincided with an escalation in provocations by Iran and its proxies, including a recent near miss at sea when fast-attack boats operated by Tehran’s Islamic Revolutionary Guard Corps crept up on U.S. vessels in the Persian Gulf, coming within 50 yards of one. The Pentagon earlier this year scrambled in response to attacks, orchestrated by Iranian-affiliated rebels in Yemen, targeted U.S. and UAE troops at a base south of Abu Dhabi.

Iran, the United States’ most formidable rival in the Middle East, has long been a preoccupation of CENTCOM commanders. Kurilla, who spent much of the spring traveling throughout the region and meeting with foreign counterparts, is fixated on the aggressive activity Tehran has gotten away with and frequently references a recent NBC News analysis that counted 29 attacks against U.S. targets since October that did not elicit a forceful response.

The Tanf garrison, located along Syria’s borders with Jordan and Iraq, still bears scars from an Iranian militia attack in October. Marks from where drones struck the compound are visible on a building near the U.S. military’s command center, where a whiteboard logs recent incidents within the 35-mile deconfliction zone that surrounds it. A floor-to-ceiling map of the area marks exactly what parts of the territory those threats have rendered vulnerable.

The U.S. military has enough firepower here to beat back an attack, officials say: There are armored vehicles and two high-mobility artillery rocket systems with the range to hit anything encroaching on the deconfliction zone. But most of the time, as with U.S. assets elsewhere in the region, they sit unused because the perceived dangers of responding with force are adjudged to be too high.

“The last thing we want to do is start a conflict with Russia right now,” Kurilla told the troops at the garrison. But, he added, “we will defend ourselves ... We won’t hesitate to respond.”

Russia’s aggressive actions against the United States have only complicated a balancing act in the Middle East that in recent years has dictated how the U.S. military manages its interests. 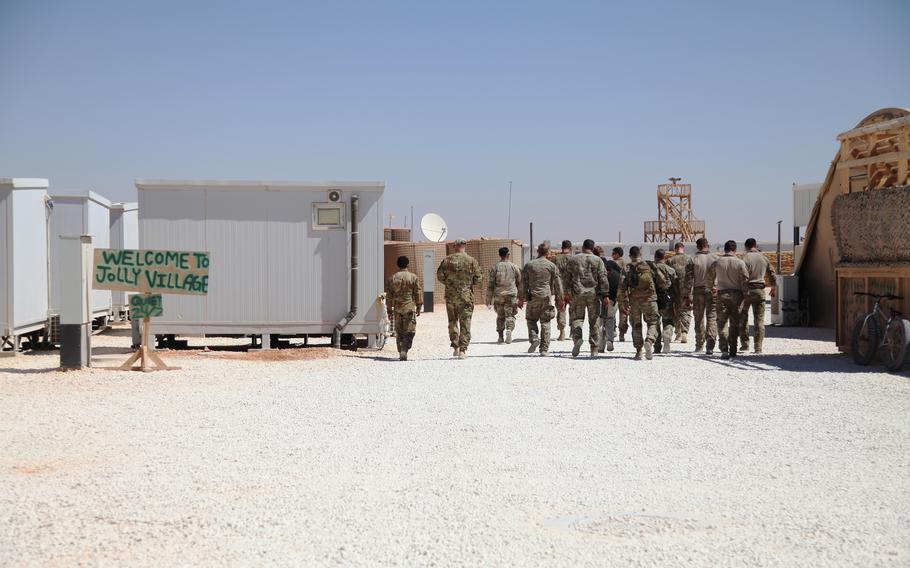 Military personnel file in for a briefing on a part of the base that houses U.S. Special Forces at the al-Tanf garrison in Syria on June 21, 2022. (Karoun Demirjian/The Washington Post)

“Iran routinely tries to test where American red lines might be, and march up to that,” said William Wechsler, director of Middle East programs at the Atlantic Council and a former high-ranking Pentagon official. “They’re trying to establish an accepted set of behaviors that work to their advantage ... and we have, in effect, largely accepted these malign norms of behavior over multiple administrations.”

“For red lines to work, one of two dynamics must be in effect. One is that we understand our own red lines with great specificity internally and communicate those externally very clearly,” Wechsler said. “The second way is that if you have a degree of overwhelming power, then you can have a degree of strategic ambiguity. But I fear those days are behind the United States ... Fear of American power has faded in the last 20 years.”

In the Middle East, in particular, the United States is scaling down after decades of war in Afghanistan and Iraq. That creates opportunities for adversaries to flex, experts say, and show they are a force to be reckoned with.

In the case of Russia, the obvious factor driving tensions with the United States is the war in Ukraine. The Kremlin is furious about the U.S.-led effort to constrain Moscow and arm Kyiv — and its leaders, analysts say, are worried about losing clout elsewhere in the world. Kurilla attributed Russia’s increased bravado in Syria to Colonel-General Aleksandr Chayko, who has returned to the Middle East after stunted tenure commanding Russian forces in Ukraine.

“What we don’t know is, is he a dog off-leash trying to reestablish himself?” Kurilla said to U.S. troops at Tanf. “What is the reason for some of this more aggressive behavior?”

There are questions as well about what is driving the escalation in attacks backed by Iran. Generally, they coincide with the long, slow breakdown of efforts to revive an international compact to constrain Tehran’s nuclear ambitions. The incident in the Persian Gulf also tracks closely with the United States imposing new sanctions against Iranian petrochemical producers and tit-for-tat incidents between Greece and Iran involving the seizures of oil tankers.

But there is another element at play: shifting signals from Washington. The Biden administration has not shown the lenience toward Russia espoused by his predecessor, nor the unsparingly hard line toward Iran. Unlike President Donald Trump, Biden has adopted a posture of defiance toward Moscow while putting greater emphasis on diplomacy with Tehran, though the administration insists it is not allowing provocations go unanswered.

“There is nothing President Biden takes more seriously than the security of U.S. personnel deployed overseas,” said a National Security Council spokesperson, speaking on the condition of anonymity under ground rules set by the White House.

This person said that the upon taking office, the Biden administration acted swiftly to deter attacks by Iran-backed groups, deploying a variety of tools, including military strikes, plus diplomatic and coercive measures.

“Not every response will be seen or visible, but Iran fully understands that the United States is prepared to respond directly to any threat against U.S. personnel,” the spokesperson continued.

Though U.S. government officials are coy about what would trigger a military response, there is a consensus among experts that one clear red line for the United States is the killing an American citizen.

“Deaths of Americans demand a response. Destruction to U.S. interests or U.S. partners and allies, it’s a question mark,” said Matthew McInnis, a senior fellow with the Institute of the Study of War.

“That’s just where the American people are right now.” Tactical vests and weapons sitting in cubbyholes outside a secure room in the Al-Tanf garrison compound in Syria on June 21. (Karoun Demirjian/The Washington Post)