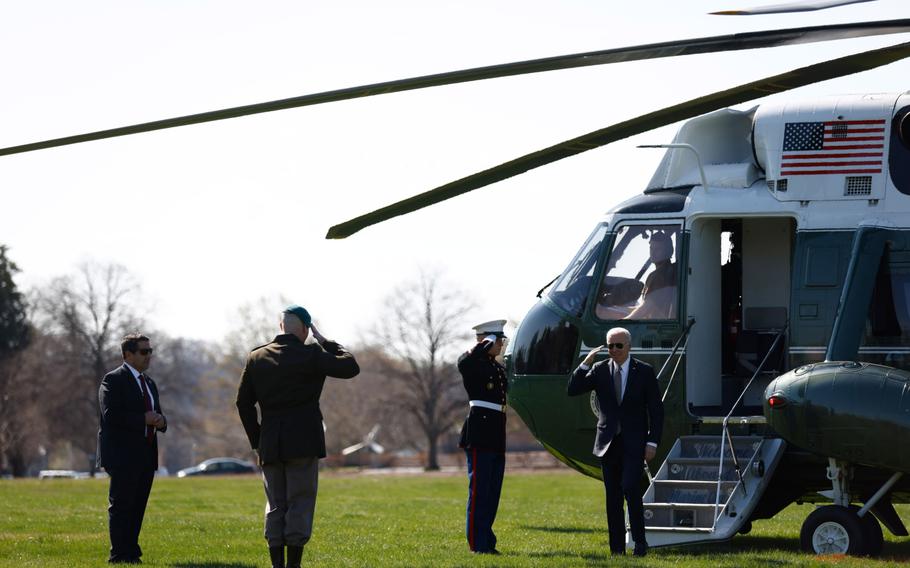 President Joe Biden exits Marine One while arriving at Fort McNair in Washington, D.C., on April 4, 2022. Ahead of Biden’s upcoming visit to the Middle East, Jordan’s King Abdullah II said he would support the formation of a Middle East military alliance. (Ting Shen/Bloomberg)

Jordan's King Abdullah II said he would support the formation of a Middle East military alliance similar to the North Atlantic Treaty Organization (NATO) ahead of a visit of U.S. President Joe Biden to the region.

"I would be one of the first people that would endorse a Middle East NATO," the king, a major U.S. ally, said in an interview with CNBC.

Gulf oil exporters have been pressing the U.S. for better defense against attacks they blame on Iran and its proxies. This week Israel's defense minister said his country had already developed an air-defense alliance with the U.S. and regional partners that successfully thwarted Iranian attempts to attack Israel and other Middle Eastern countries.

The idea of NATO itself expanding into the Middle East was touted by U.S. President Donald Trump during his time in office as a way to counter Iran.

King Abdullah said the vision for a Middle East NATO must be very clear, and its role should be well defined. "Otherwise, it confuses everybody," he said.

King Abdullah said countries in the Middle East are also starting to work together to address challenges from the war in Ukraine, a unity he described as "unusual for the region."

Gulf countries have pumped billions of dollars of aid into Egypt, a major wheat importer which is suffering the ripple effects of the war on its economy. Next month Saudi Arabia will convene regional leaders in a summit in Jeddah, that Biden will attend.