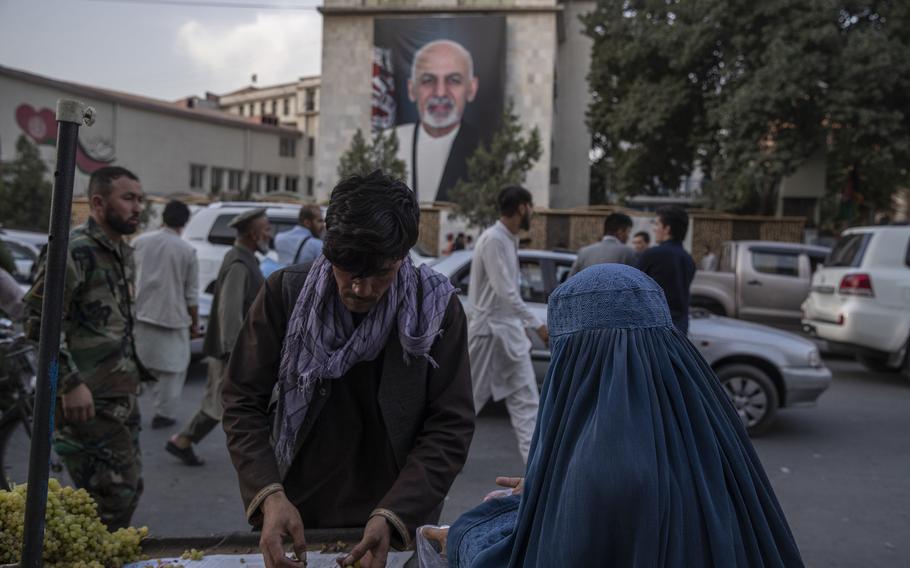 A portrait of Afghan President Ashraf Ghani in central Kabul on Aug. 14, 2021, a day before the Taliban takeover. Five British men held by the Taliban have been released, the United Kingdom’s Foreign Office said in a statement Monday, June 20, 2022. (Victor J. Blue/The Washington Post)

KABUL, Afghanistan — Five British men held by the Taliban have been released, the United Kingdom's Foreign Office said in a statement Monday.

The men were arrested nearly six months ago on charges of "violating Afghan law and the Afghan people's traditions," Zabihullah Mujahid, a Taliban spokesman, tweeted. Mujahid did not provide any further details on the charges against the men or their time in detention.

Arrests of foreigners by the Taliban began late last year and continued for months as its leadership cracked down on activists and journalists accused of working in the country without proper documentation.

"An understanding was reached following a series of meetings between the British government and Islamic Emirate of Afghanistan," Mujahid said, adding that the detainees were handed over to U.K. authorities on Sunday.

Among those released was former BBC cameraman Peter Jouvenal, according to a statement from his family, who said he was held for six months.

"We are grateful to the thousands of people who have supported the campaign to release him," the statement read. Jouvenal's family also thanked Britain's Foreign Office for working "tirelessly" to secure his release.

The news of the men's release comes a day after a rare statement from the U.K. Foreign Office condemning political violence by all parties in Afghanistan.

"The UK does not support anyone, including Afghan nationals, seeking to achieve political change through violence, or any activity inciting violence for political purposes," Hugo Shorter, chargé d'affaires at the U.K. mission to Afghanistan in Doha, Qatar, said in the statement.

A number of reports have documented a recent spike in violent resistance to Taliban rule in Afghanistan's Panjshir valley, including a Human Rights Watch report that accused the Taliban of torture and unlawful conduct.

Two other foreign nationals held by the Taliban were released earlier this year. A Canadian woman was freed in March after roughly a month in custody, and two journalists working for the United Nations were released in February after being held for about a week.

"Afghanistan is a peaceful place for everyone. Everyone can come to Afghanistan for carrying out welfare activities and tourism purposes," Mujahid said.