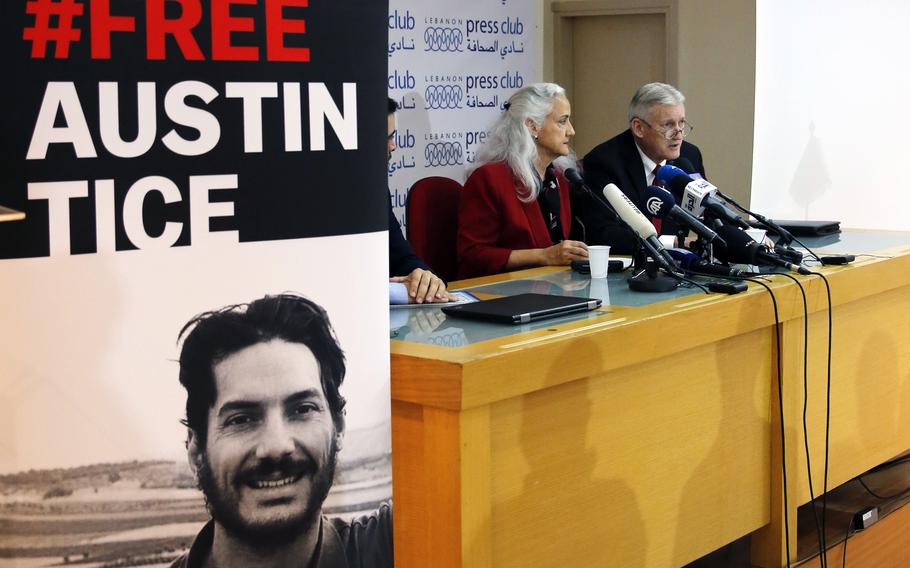 Marc and Debra Tice, the parents of Austin Tice, speak during a press conference, at the Press Club, in Beirut, Lebanon, Dec. 4, 2018. President Joe Biden says he's meeting with the parents of American journalist Austin Tice, who went missing in Syria 10 years ago. (Bilal Hussein/AP)

BEIRUT — Lebanon’s intelligence chief said Thursday that he met with Biden administration officials this week to discuss ways he could help secure the release of six Americans who are being held prisoner or are missing in Syria, including Austin Tice, a freelance journalist who contributed to The Washington Post.

Maj. Gen. Abbas Ibrahim, the head of the Lebanese General Security Directorate, said in an interview that he received an invitation to the White House earlier this month to discuss the missing Americans. The invitation came a few days after President Joe Biden met with Tice’s parents.

Ibrahim, who has helped to secure the release of several hostages in the Middle East over the past decade, has for years been involved in the effort to locate Tice, who disappeared in Syria in 2012, as well as other missing Americans. “They wanted me to resume my effort to solve this problem,” he said, referring to his meetings this week with White House officials. “They wanted their people back, and this is their goal.”

State Department spokesman Ned Price on Wednesday confirmed that Ibrahim met with Roger Carstens, the special presidential envoy for hostage affairs. “We are not going to comment on the specifics of those discussions beyond restating the fact that we have no higher priority than seeing the safe release of Americans who are wrongfully detained or held hostage anywhere around the world,” Price said during a news briefing.

“Of course, we talked about the case of Austin Tice yesterday, an American who has been - who has been separated from his family for nearly 10 years, who has spent a quarter of his life separated from his family,” Price said. “He is always top of mind. The other Americans who are detained in places like Iran and Russia and Afghanistan and Venezuela and elsewhere are always top of mind for us too.”

Tice disappeared when he attempted to leave the rebel-held town of Darayya, outside the Syrian capital, Damascus. Darayya was surrounded by government troops at the time. His family members have repeatedly said they are confident that he is alive. Syria has not publicly acknowledged holding Tice or the other Americans, including Majd Kamalmaz, a psychotherapist who went missing in 2017, and four other U.S. citizens whose families do not want publicity.

Biden met with Tice’s parents, Marc and Debra Tice, on May 2, and “reiterated his commitment to continue to work through all available avenues to secure Austin’s long overdue return to his family,” White House press secretary Jen Psaki said in a statement at the time.

Ibrahim, who also met with Debra Tice this week, said it had been a “long time” since any credible information had emerged about Austin Tice’s fate.

“I want to tell everyone that she will not give up at all,” he said of Tice’s mother. “I am beside her with that. We want to close this file. Everyone is eager to do so.”

This week marked the second time in less than two years that Ibrahim has been summoned by the White House to assist in locating missing Americans. His previous trip, in October 2020, was aimed at furthering negotiations with the Syrian government that President Donald Trump launched to help secure the release of the Americans.

Earlier that year, two senior U.S. officials, including Carstens, visited Damascus for secret talks with the head of Syria’s intelligence agency about the fate of Tice, in the first official talks between the two countries since 2012.

At the time of Ibrahim’s 2020 visit, there were disputes within the Trump administration over how far it should go in dealing with Syrian President Bashar al-Assad. Another subject of discord involved the administration’s dealings with Ibrahim, whose position puts him in frequent contact with Hezbollah, a party in the Lebanese government that is designated as a terrorist organization by the United States.

Ibrahim dismissed those concerns as political issues that should not impede his work. “We are talking about a humanitarian case,” he said Thursday.

Ibrahim helped secure the release of U.S. traveler Sam Goodwin, who was detained at a Syrian government checkpoint in 2019, and a Canadian citizen, Kristian Baxter, who had crossed illegally into Syria from Lebanon. In 2014, Ibrahim oversaw the release of a group of nuns kidnapped by the Nusra Front, a group linked to al-Qaida.

Ibrahim did not say with whom he would meet in the Syrian government, adding that it was better if his efforts remained in the “shadow.” “When it’s under a spotlight, I believe things will be spoiled,” he said.

In the past, Syria had insisted on a complete withdrawal of U.S. troops from the country and the lifting of U.S. sanctions as a condition for any further discussions about the missing Americans, people familiar with the negotiations said.

“I am not sure what the Syrians want now,” Ibrahim said.