Ahead of Biden visit, Israel launches biggest eviction of Palestinians in decades 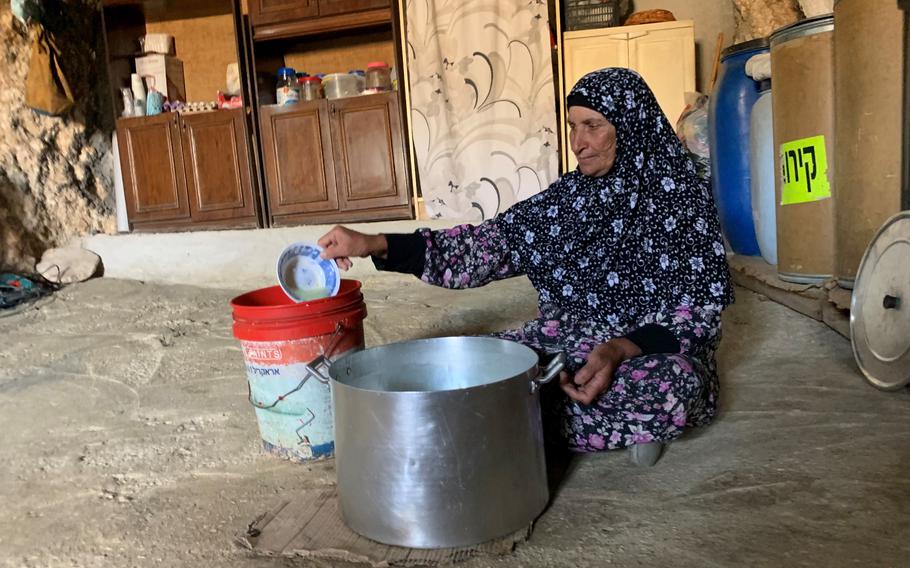 Yusara al Najar makes labneh cheese in the cave where her family of 10 has been living since their home was demolished. Her grandparents dug the cave decades ago, a traditional living arrangement in the area. Families now use them as kitchens, extra space and refugees when the army knocks down their house. (Steve Hendrix/The Washington Post)

AL-MARKAZ VILLAGE, West Bank — The Najjar family knew what to expect on the morning of May 11 when a neighbor called: “The bulldozer is coming.” For the second time in five months, the Israeli military had come to knock down their house.

But this time there was reason to fear that the house would be gone for good. After decades of demolition, rebuilding and a more than 20-year legal battle, Israel’s highest court this month gave the military permission to permanently evict more than 1,000 Palestinians here and repurpose the land for an army firing range.

Less than week after the high court ruling, the Najjars’ house was demolished, marking the start of what activists say will probably be the biggest mass expulsion of Palestinians in the occupied West Bank since the 1967 war, when hundreds of thousands of Palestinians fled or were driven from territories captured by Israel.

The court was unswayed by historical documents presented by advocates for the Palestinians, showing what they said was evidence that the proposal to establish a firing range, decades ago, was meant to prevent Palestinians from claiming the land.

“We had 30 minutes to get out what we could,” said Yusara al-Najjar, who was born in a hand-hewn cave on this same slope in the Negev desert 60 years ago. She looked over the pile of broken blocks and twisted metal that had been her family home and wiped her hands with a slap. “It took no time and our house was gone, again.”

The demolitions have sparked expressions of concern from Washington ahead of a planned June visit to Israel by President Biden, coming at a time of mounting instability in Israel’s coalition government and the recent approval of more than 4,200 new housing units in Israeli settlements in the West Bank. U.S. State Department spokesman Ned Price, responding to a question about the high court ruling, beseeched both Israelis and Palestinians to avoid steps that raise tensions. “This certainly includes evictions,” he said.

The European Union urged Israel to halt the demolitions. A United Nations human rights panel warned that the “forcible transfer” of residents would amount to “a serious breach of international and humanitarian and human rights laws.”

The Israel Defense Forces said in a statement that the demolitions were in accordance with the high court’s years-long review and its unanimous ruling on behalf of the military.

The tug of war for these dry rolling hills south of the biblical city of Hebron began in the 1980s, when Israeli officials laid claim to several areas of the West Bank for the stated reason of creating military training grounds. 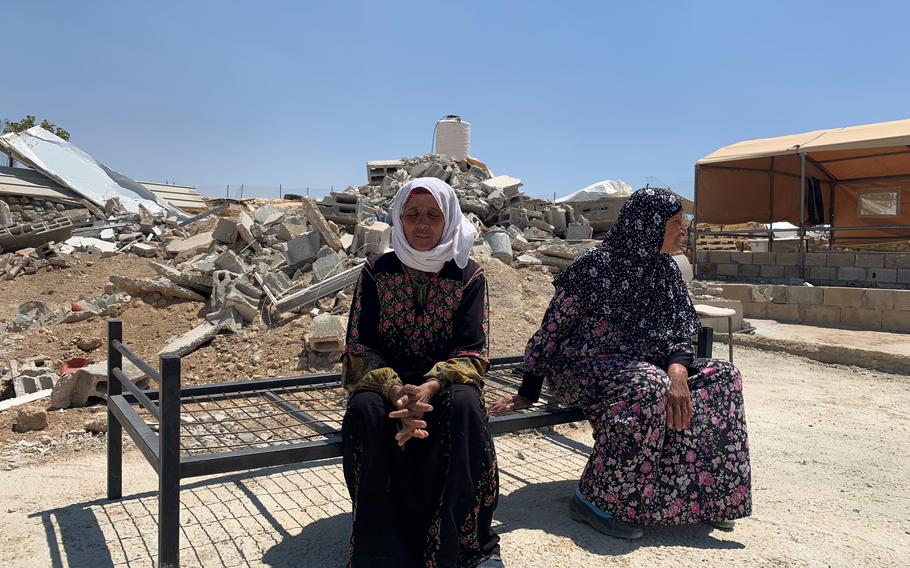 Safa Muhammed Aba al Najar, left, and Yusara al Najar sit on a bed frame in front of their house in the Masafer Yatta area of the West Bank that was demolished by the Israeli Army on May 11. (Steve Hendrix/The Washington Post)

“The vital importance of this firing zone to the Israel Defense Forces stems from the unique topographical character of the area, which allows for training methods specific to both small and large frameworks, from a squad to a battalion,” the military said in court documents reported by the Times of Israel.

But human rights activists, both Palestinian and Israeli, contend that the real purpose of many of the firing zones has been to clear away Arab residents and strengthen Israel’s grip on more occupied Palestinian territory. Often, the designation has made way for expanding Israeli settlements, which are considered illegal by most of the international community.

Archived minutes from a 1981 meeting recently found by researchers on the Israeli-Palestinian conflict seemed to support that idea. Then-agriculture minister — later prime minister — Ariel Sharon is recorded saying it was important to slow the “expansion of Arab villagers from the hills,” according to a story in Israel’s Haaretz newspaper on the document. “We have an interest in expanding and enlarging the shooting zones there, to keep these areas, which are so vital, in our hands.”

The document was entered as legal evidence.

Israeli officials argued that the residents of eight to 12 small hamlets in Zone 918 — most of them tent-dwelling herders who still wintered in caves dug from the limestone — could not show legal ownership of the land.

What followed was a legal Catch-22. Residents and their advocates repeatedly applied for permits to build houses and string power lines. Military officials, saying no one was allowed to live inside a firing range, denied the applications and then regularly dispatched armed demolition squads to knock down the “illegal” structures.

Officials issued the first eviction orders in 1999 but have since refrained from physically removing families as the legal challenges dragged on. Instead, according to advocates, the repetitive demolitions amount to strategic harassment meant drive the families away.

“I don’t think we’ll see pictures of people being put on trucks, because of the optics,” said Dror Sadot of B’Tselem, an Israeli human rights organization that has worked on the case. “What we’ll see will just be more repeated demolitions, which will force the community to leave because they can’t live there anymore.”

Over the years, the court has entertained compromises, including one that would allow evicted Palestinians to return to the fields on Jewish holidays and other periods when no military training was likely to take place. Residents rejected those proposals out of hand.

The high court finally brought an end to the challenge on May 5, ruling unanimously for the military and finding that the Palestinian families had failed to prove they had a legal claim to the land or had lived there before it was designated as a firing range.

“There is the law that works for the Jews, but for us it is nonexistent,” said Nidal Younes, head of the Masafer Yatta village council, who noted that a nearby outpost maintained by Israeli settlers is not subject to evictions under the order. 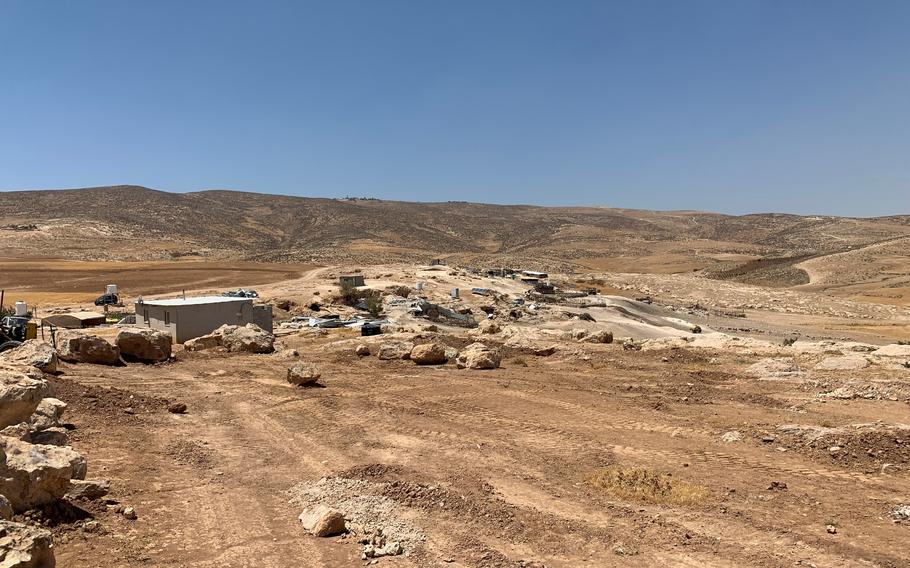 The village of al-Markaz in the Masafer Yatta area (South Hebron Hills) where multiple houses were demolished on May 11. (Steve Hendrix/The Washington Post)

In her village, Najjar shakes her head at the idea that she is a newcomer to the land where she says her grandparents dug a limestone herder’s shelter in the 1950s and where she was born in 1961.

Now she and her family have been forced back into that cave, which, like many families, they have maintained over the years as a kitchen and extra living space. As the number of Israeli settlers in the area grew, and with them incidents of settler vandalism and physical attacks, they saw it as a refuge from violence.

The simple houses of block and metal roofing they built have all been demolished.

Tending to a batch of traditional labneh cheese under solar-powered lights, Najjar described the most recent unannounced appearance of the bulldozer, escorted by more than a dozen soldiers with automatic weapons.

“They didn’t say why they were here, they gave us no papers,” she said. “But we knew.”

The soldiers instructed the men of the family to stay well away from the house as the women raced to grab clothes and bedding. They struggled with a washing machine. Many of their belongings were still inside when the soldiers told them to stand back.

It took less than two hours for the bulldozer to level two houses and two sheep pens in the village of seven families, Najjar said. In all, the army demolished 20 structures in three villages that day, according to Basel Adra, a Palestinian activist who documents IDF activity in the area.

The IDF has not said when it plans to carry out more demolition orders.