WASHINGTON — No laws of war were violated and no troops will be held accountable for U.S. airstrikes three years ago that killed civilians in Baghuz, Syria, according to a summary of a classified Pentagon report.

However, the incident’s investigation should have been completed and reported publicly much sooner, investigators concluded in the summary released Tuesday.

On March 18, 2019, Islamic State fighters in Baghuz launched “a successful counterattack against the Syrian Democratic Forces," prompting the Syrian troops to request “air support” from U.S. coalition forces, according to the report.

The unnamed U.S. commander then had his team work to validate the ISIS threat and investigate whether civilians were in the area before authorizing the strikes.

The military “repeatedly received confirmations” that no civilians were in the blast range before conducting the airstrikes, however the information was wrong, Army Gen. Michael Garrett wrote in the report.

Though civilians were harmed, Garrett’s investigation found the U.S. “acted reasonably and within the bounds of the [rules of engagement] and [law of war],” according to the report.

“The [commander]… did not deliberately or with wanton disregard cause civilian casualties,” Garrett wrote in the report. “The GFC’s decision to engage the ISIS fighters was necessary to defend SDF partner forces.” 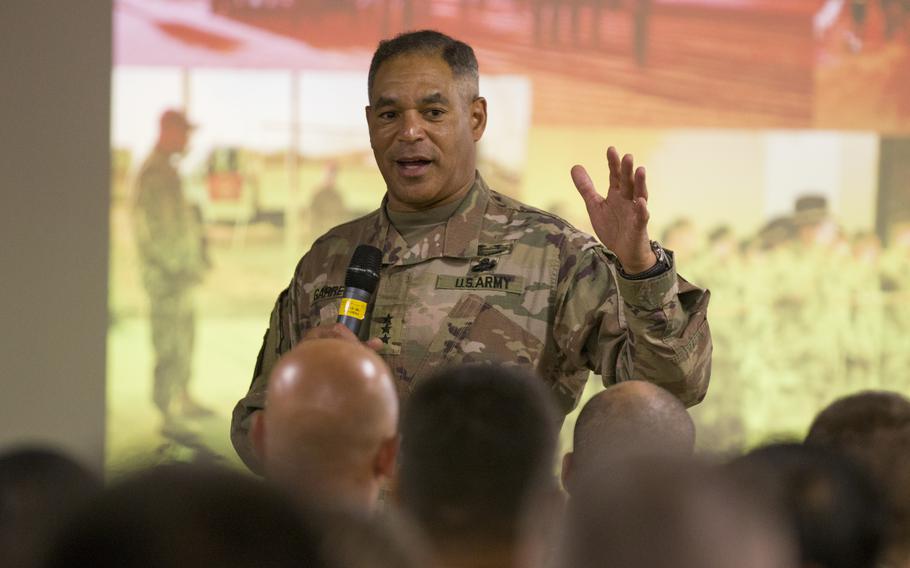 Michael Garrett, an Army lieutenant general at the time of this photo, speaks in 2018 with members of a multinational force and observers gathered in Egypt. Gen. Garrett recently led an investigation into U.S. airstrikes in Syria in 2019 that killed civilians. The investigation report released Tuesday, May 17, 2022, found no laws were broken in the attack. (Andrew Carroll/ Army photo )

While the investigation found the commander “relied on data that was not fully accurate,” Garrett wrote it was not the commander’s fault because the necessary information was “not available to him at the time.”

“In accordance with the [law of war], the GFC’s actions cannot be judged based on what we know now in hindsight, but only on the reasonableness of his decisions given the information known at the time,” Garrett concluded.

Thus, he did not recommend any punishments to hold the commander accountable for the civilian casualties. However, Kirby said issuing punishments is not the only way that the Defense Department takes accountability for its actions.

“We're standing up here talking about civilian casualties. You don't see that coming out of the Russian Defense Ministry [regarding Ukraine],” he told reporters at the Pentagon. “We're actually answering for and releasing an unclassified summary of a classified report on this.”

Still, the investigation found the military should have reported the civilian casualties and closed an initial investigation into the incident much sooner, but “numerous policy compliance deficiencies at multiple levels of command” prevented that from occurring.

“Although the incident was reviewed and investigated, administrative steps to close the incident and thereby cause it to be included in reports to Congress did not occur,” Garrett wrote in the report.

Instead, the incident did not become public until Nov. 15 when The New York Times reported it. The Pentagon began the independent review about two weeks later.

“I find that the administrative deficiencies contributed to the impression that the [Defense Department] was not treating this [civilian casualty] incident seriously, was not being transparent, and was not following its own protocols and procedures,” the general said in the report.

In response to the findings, Defense Secretary Lloyd Austin on Tuesday issued a memorandum stating deadlines to report and review civilian casualty incidents must be met.

“Delays at any stage of the process can have significant costs, including the loss of relevant information, the degradation of memories and the perception that the department does not take the incident seriously,” he said in the memo.

Austin also directed such reviews to be “thorough” and ordered combatant command leaders “to reinforce within their commands” the importance of meeting deadlines and following procedures in civilian casualty incident reporting.

“Our efforts to mitigate and respond to civilian harm resulting from U.S. military operations are a direct reflection of U.S. values,” the secretary said. “Protecting innocent civilians is fundamental to our operational success and is a strategic and moral imperative.”