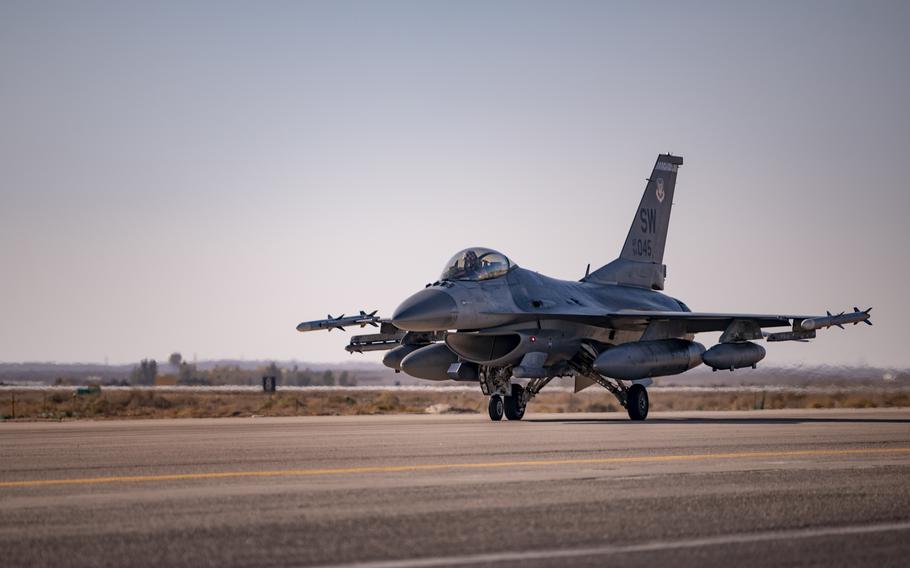 An F-16C Fighting Falcon arrives to the 332nd Air Expeditionary Wing on Oct. 22, 2021, at an undisclosed location. Images of training released by the Air Force have been geolocated to Muwaffaq Salti Air Base in Jordan, as reported by the defense news agency Janes. (Karla Parra/Air Force)

The U.S. military is spending more than a quarter of a billion dollars to build up a seldom-acknowledged air base in Jordan, with the latest project announced earlier this week.

The construction stems from the increased American military presence in Jordan in recent years, as the longtime U.S. ally seeks to bolster its security in the region, analysts said.

The newest contract, worth $14.6 million, funds construction of an air traffic control tower in the eastern city of Azraq, the Pentagon announced Tuesday.

The project is the seventh awarded by the U.S. Army Corps of Engineers since 2017 as part of an expenditure of at least $265 million to repair runways, drill water wells and build dorms that can house up to 280 people.

Although the base isn’t named in the announcement, the Pentagon has identified the headquarters of its 332nd Air Expeditionary Wing’s air combat command as Muwaffaq Salti Air Base in Azraq. 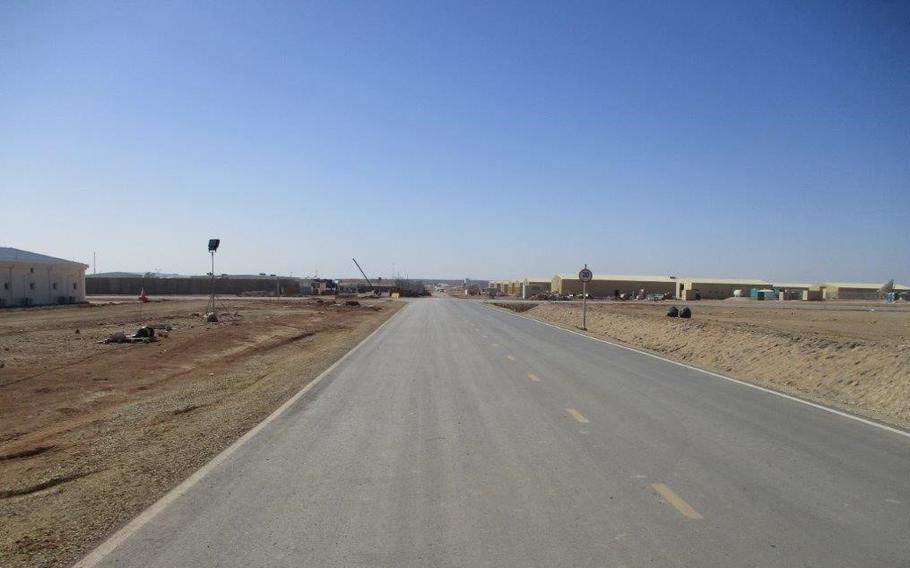 The U.S. military is spending more than a quarter of a billion dollars to build up a seldom-acknowledged air base in Jordan, shown here in a contractor photo Jan. 2, 2021. The latest project, worth $14.6 million, was announced earlier this week. It involves construction of an air traffic control tower, officials said. (Morganti Group)

The base, located near the border of Iraq and Syria, saw fighter-bombers flying from its runways during the U.S. fight against ISIS that began in 2014.

The contract announcement comes as Jordanian leader King Abdullah II is expected to meet with President Joe Biden on Friday. Last week, Abdullah met with top generals at U.S. Central Command in Tampa, Fla., the command confirmed in an email.

While Jordan has had strong ties with the U.S. going back to the 1950s, the kingdom wants to take its relationship to the “next level” by hosting American bases, said Ghaith al-Omari, a senior researcher at the Washington Institute for Near East Policy.

“It is seen as a guarantee that if any of its neighbors try to disrupt it, the U.S. would step in,” al-Omari said.

Annual U.S. aid to Jordan has nearly quadrupled over the past 15 years, and the country now hosts about 3,000 American troops, a recent Congressional Research Service report said. An entry control point at an installation determined to be Muwaffaq Salti Air Base in Jordan. Construction projects at the base included one worth $18 million to build roads, guard gates, sewage systems and three water wells. (Morganti Group)

A turning point in the relationship occurred when American troops announced the formation of a coalition to fight the Islamic State group in 2014, which brought U.S. “boots on the ground” to Jordan, al-Omari said.

Multiple branches of the U.S. military have since partnered with their Jordanian counterparts.

The U.S. Army shifted supplies from three bases in Qatar to Jordan last summer. The Navy tested robotic surveillance boats at the country’s Aqaba Naval Base last winter. And the Marines completed their first Intrepid Maven joint exercise this spring.

The U.S. Air Force requested renovations to the base as it lacked adequate ramp space for combat missions, and its living quarters were deemed unsafe, budget documents said in 2017.

Projects at the base have included one worth $18 million for construction of roads, entry control points, sewage systems and three water wells, said an online summary by the Morganti Group, a construction company based in Danbury, Conn., with an office in Jordan.

The summary says the project occurred at an “undisclosed location” in Azraq, but it matches a description by the Pentagon of a contract given to the Morganti Group in 2018.

The U.S. has been secretive in speaking about the base, but photos of anti-drone training at “an undisclosed location in southwest Asia” can be geolocated to Muwaffaq Salti Air Base, the defense news agency Janes reported in December.

Neither the Pentagon nor the Jordanian foreign ministry responded to a Stars and Stripes request for information about the U.S. presence at the base.

The lack of comment could be due to Jordan’s concerns about how its citizens will react to an overt U.S. military presence, analysts said.

When a bilateral security agreement became public in January 2021, Jordanian lawmakers and advocates expressed concerns over the legality of the pact and possible violation of the country’s sovereignty, regional news site Al-Monitor reported last April.

But for Jordan’s leader, the rewards of hosting a major U.S. base could be worth the risks, analysts said.

Countries such as Qatar, Bahrain and the United Arab Emirates are home to U.S. troops and have geopolitical clout far beyond the power of their tiny militaries, al-Omari said.

And for the U.S., bases in Jordan are safer from the threat of missile attacks by Iran and its proxies, said Michael Hanna, U.S. program director at the International Crisis Group, a Brussels-based think tank.

The American base in the UAE came under fire in January from two missile launched from Yemen by Houthi rebels, The New York Times reported.

At almost 900 miles away from Tehran, Azraq is farther away from potential attack, Hanna said.

“This more dispersed approach to basing is the logical next step,” said Hanna. “It’s much harder for Iran to target Jordan from that distance, and (the Iranians) don’t have the proxy networks established.”

Both countries could benefit from the buildup of U.S. bases in Jordan, said Bruce Riedel, formerly of the CIA and the National Security Council and now a senior fellow at the Washington-based Brookings Institution.

“The U.S. got access to a base in a secure country; Jordan got American protection and aid to fight a common threat,” Riedel said.