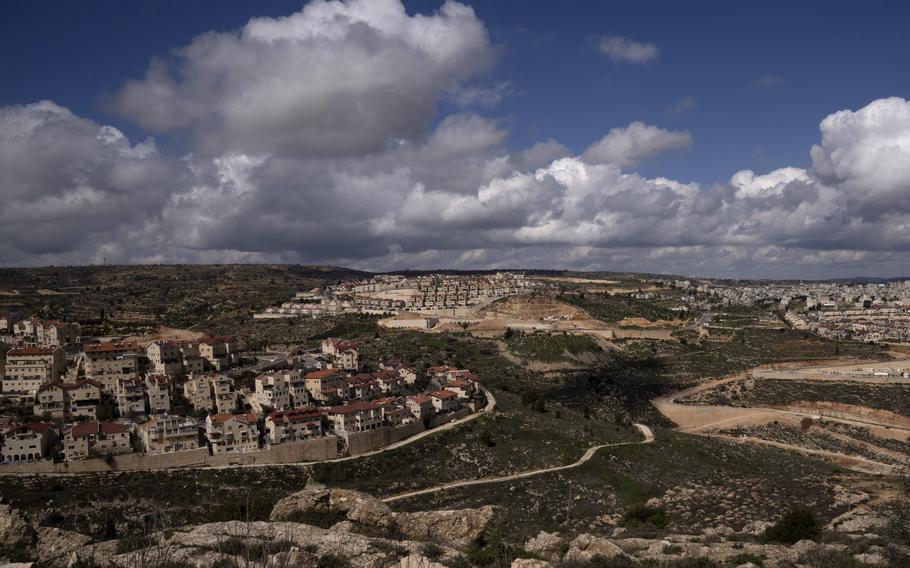 A general view of the West Bank Jewish settlement of Efrat, Thursday, March 10, 2022. An Israeli rights group says Israel has approved the construction of more than 4,000 settler homes in the occupied West Bank. (Maya Alleruzzo/AP)

JERUSALEM — Israel advanced plans for the construction of more than 4,000 settler homes in the occupied West Bank on Thursday, a rights group said, a day after the military demolished homes in an area where hundreds of Palestinians face the threat of expulsion.

It was a jolting illustration of Israel’s policies in the territory it has occupied for nearly 55 years. Critics, including three major human rights groups, say those policies amount to apartheid, a charge Israel rejects as an attack on its very legitimacy.

Hagit Ofran, an expert at the anti-settlement watchdog group Peace Now, told The Associated Press that a military planning body approved 4,427 housing units at a meeting on Thursday that she attended. “The state of Israel took another stumble toward the abyss and further deepened the occupation,” she tweeted.

Spokespeople for the Israeli government and the military body in charge of civilian affairs in the West Bank did not respond to requests for comment.

It’s the biggest advancement of settlement projects since the Biden administration took office. The White House opposes settlement construction and views it as an obstacle to any eventual peace agreement with the Palestinians.

There was no immediate comment from the administration on Thursday’s decision. But last week, when the first reports emerged of the impending settlement approval, State Department spokeswoman Jalina Porter reiterated that the U.S. “strongly” opposes settlement expansion.

Most of the international community considers the settlements illegal and supports a two-state solution to the conflict. But neither the United States nor other world powers have given Israel — the stronger party — any incentive to accede to such an arrangement. Israel says Palestinian leaders have rejected proposals by previous governments that would have given them a state.

Israel views the West Bank as the biblical and historical heartland of the Jewish people. Prime Minister Naftali Bennett, who once led the main settler organization, is opposed to Palestinian statehood, but his government has taken steps to improve economic conditions for Palestinians.

Israel approved some 3,000 settler homes in October, brushing aside a rebuke from the U.S., its closest ally. Peace talks with the Palestinians broke down more than a decade ago, in part because of Israel’s continuing construction on lands the Palestinians want for a future state.

On Wednesday, Israeli troops demolished at least 18 buildings and structures in the West Bank following a Supreme Court decision that would force at least 1,000 Palestinians out of an area Israel designated as a firing zone in the early 1980s.

B’Tselem, another Israeli rights group, said 12 residential buildings were among the structures that were demolished, in villages in the arid hills south of the West Bank city of Hebron.

Residents of the Masafer Yatta say they have been living in the region, herding animals and practicing traditional desert agriculture for decades, long before Israel captured the West Bank in the 1967 war. The Supreme Court sided with the military, which says there were no permanent structures in the area before it was designated a training zone.

“What’s happening now is ethnic cleansing,” Sami Huraini, an activist and a resident of the area, told the AP. “They are trying to expel the people from this land, saying they never lived here permanently, which is a lie.”

He said residents of the area where the demolitions were carried out are determined to remain there. “The people are staying on their land and have already started to rebuild,” he said.

Israel has built more than 130 settlements across the West Bank that today are home to nearly 500,000 settlers, who have Israeli citizenship. Nearly 3 million Palestinians live in the territory under open-ended Israeli military rule. The Palestinian Authority exercises limited self-rule over parts of the West Bank and cooperates with Israel on security matters.

The Palestinians want the West Bank to form the main part of a future state, along with east Jerusalem and Gaza, all territories seized by Israel in the 1967 war. Israel annexed east Jerusalem in a move not recognized internationally, and Israel and Egypt imposed a blockade on Gaza after the Palestinian militant group Hamas seized power there in 2007.

The Palestinians view the expansion of settlements in the West Bank and annexed east Jerusalem as a major obstacle to any future peace deal because they reduce and divide up the land on which such a state would be established.