EU coordinator heads to Tehran in bid to save nuclear deal 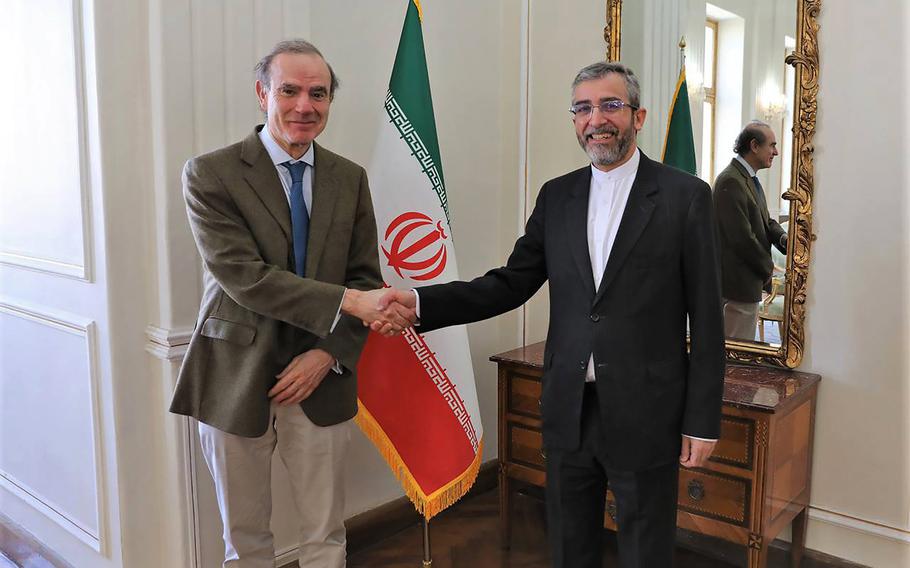 In this photo released by the Iranian Foreign Ministry, Enrique Mora, a leading European Union diplomat, left, shakes hands with Iran’s top nuclear negotiator Ali Bagheri Kani in Tehran, Iran, March 27, 2022. Mora, the European Union coordinator of talks to revive Iran’s nuclear accord with world powers said Tuesday, May 10, 2022, that he was traveling to Tehran, as the bloc makes a last-ditch effort to salvage the deal after a weeks-long standstill. (Iranian Foreign Ministry via AP)

TEHRAN, Iran — The European Union coordinator of talks to revive Iran's nuclear accord with world powers said Tuesday he was traveling to Tehran, as the bloc makes a last-ditch effort to salvage the deal after a weekslong standstill.

Enrique Mora said he'd meet with Iranian negotiator Ali Bagheri Kani during his visit to the Iranian capital. "Work on closing the remaining gaps of this negotiation continues," he tweeted.

Officials in Tehran confirmed Mora's visit, seeking to portray it as proof of Iran's diplomatic engagement and attention to economic problems.

"(The visit) shows the control of the government over the most important file," said Ali Shamkhani of Iran's Supreme National Security Council.

The landmark accord in 2015 granted Iran sanctions relief in exchange for strict curbs on its nuclear program. Former President Donald Trump pulled the U.S. out of the deal four years ago, piling sanctions on Iran under a policy of "maximum pressure." In response, Iran has gradually accelerated its enrichment of uranium — including a small amount to 60% enrichment, a short, technical step from weapons-grade levels.

President Joe Biden vowed to rejoin the deal. Talks to get both sides to return to compliance began in Vienna over a year ago. But the negotiations, which also involve the United Kingdom, Germany, France, China and Russia, have stalled since breaking off in March. The sides had seemed just on the verge of a breakthrough.

Mora has played a crucial role in facilitating the negotiations, given that Iran refuses to speak directly to America. He last traveled to Tehran in late March, before heading to Washington.

Iranian Foreign Ministry spokesman Saeed Khatibzadeh said Mora would be "conveying messages" from the other signatories to Tehran during his trip.

But talks in Vienna have remained at an impasse over several unresolved issues. U.S. officials have said a key hurdle involves Iranian demands that Washington lift its terrorism designation of Iran's powerful, paramilitary Revolutionary Guard.

Russia's invasion of Ukraine also has complicated the talks, as Moscow threatened to derail negotiations with new demands and European capitals have grown distracted by the continent's greatest humanitarian crisis since World War II.

Separately, the International Atomic Energy Agency, charged with monitoring Iran's nuclear program, has grown increasingly critical of Iran's failure to cooperate with the organization and its refusal to explain the traces of radioactive material at several undeclared nuclear sites in the country.

The agency's head, Rafael Mariano Grossi, expressed his frustration with Iran in comments to the European Parliament committees on Tuesday.

"We, in the last few months, were able to identify traces of enriched uranium in places that have never been declared by Iran … so we are extremely concerned about this," Grossi said, adding he was skeptical that officials could close a nuclear deal if the IAEA still had unanswered questions.