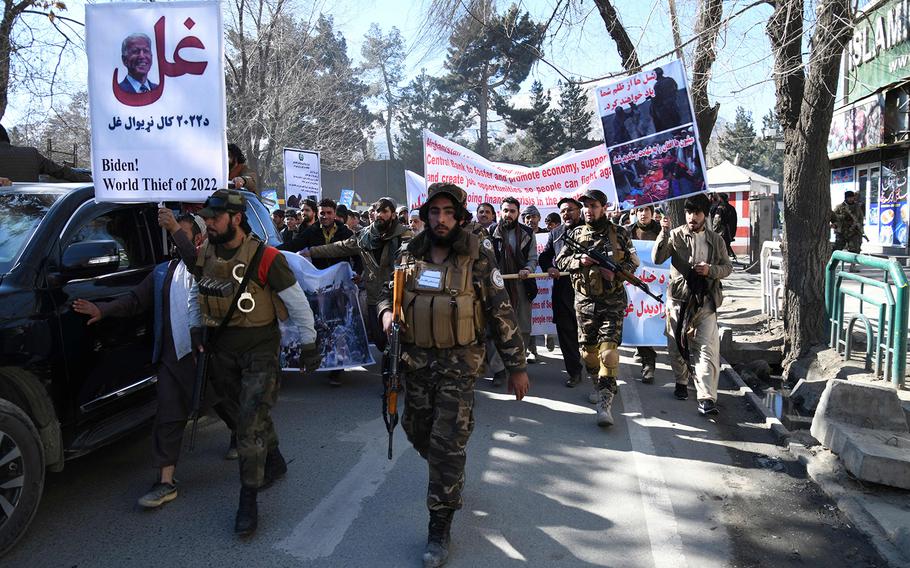 Protesters march during a demonstration against the recent remarks by U.S. President Joe Biden to freeze Afghanistan’s assets, in Kabul on Feb. 15, 2022. (Sahel Arman, AFP via Getty Images/TNS)

(Tribune News Service) — The Taliban have sought talks with the U.S. to reverse its decision to use the Afghan central bank’s reserves to compensate victims of the Sept. 11 attacks and support aid efforts in the country, a spokesman for the group said.

The militant group will use “every diplomatic approach” to push President Joe Biden to reverse his decision and release the Afghan funds, Zabihullah Mujahed said in a phone interview Tuesday. The comments are in contrast with group’s earlier strongly worded statement, which condemned the American move and warned it would “reconsider” its policy toward the U.S.

Biden on Friday issued an executive order to transfer $7 billion in central bank assets frozen in the U.S. into a consolidated account held at the Federal Reserve Bank of New York, with the U.S. seeking to use $3.5 billion for assistance to the Afghan people. The other $3.5 billion would remain in the U.S., pending ongoing litigation brought by the victims of the Sept. 11 attacks.

The funds were frozen after the Taliban took over the country in August last year.

The decision has drawn harsh criticism from many Afghan leaders, including former President Hamid Karzai, who called it an “atrocity” against the people of the country. The United Nations, which has recently made a funding plea for a record $5 billion in aid, estimates more than half of the country’s nearly 40 million people face acute hunger, with a million children at risk of dying amid a harsh winter.

Thousands of residents in Kabul and Kandahar also took to the streets to protest the decision Tuesday.