‘From the White House down,’ pleas for help disrupted Afghan evacuation, top US commander says 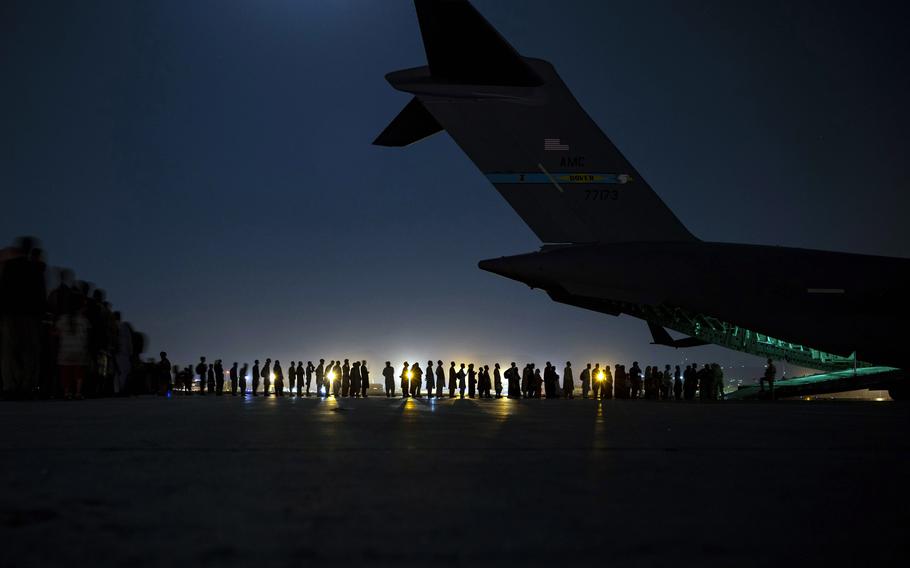 The U.S. military mission to evacuate American citizens and foreign allies from Afghanistan was hampered by continuous appeals for help from an array of advocates including White House officials, members of Congress, veterans of the war, media outlets and even the Vatican, according to the operation's senior commander.

The declassified report, spanning 2,000 pages and comprising dozens of interviews with military officials, was obtained by The Washington Post through a Freedom of Information Act request. It contains the most detailed official account to date of the 17-day evacuation, hastily orchestrated as the Taliban swept into Afghanistan's capital Aug. 15, and reveals that military leaders had deep misgivings about the Biden administration's management of the crisis.

Thousands of phone calls, text messages and emails flooded the U.S. operations center at Kabul's airport throughout the evacuation, prompting Vasely, a Navy SEAL, to divert personnel and establish a "coordination cell" responsible for processing the overwhelming volume of communications from Washington and beyond, he told investigators. Vasely said social media exacerbated the problem, broadening the "aperture of ambition" to the point that people even campaigned for the military to rescue specific dogs.

The stated priority, the admiral said, had been to first evacuate American citizens, followed by lawful permanent residents, and then Afghans who had aided the United States throughout its 20-year war.

"But you had everyone from the White House down with a new flavor of the day for prioritization," Vasely told the Army investigators.

The requests came from people or groups seeking to work through official and unofficial channels. In other interviews contained in the investigation report, U.S. troops described being inundated with pleas for help — voice mails and emails from people they had, in some cases, never met but who had discovered they were a part of the rescue operation.

The calls for help became more frantic as it became clear the evacuation would not be extended. Among those who sought the U.S. government's assistance were media outlets, including The Washington Post, who had Western journalists and Afghan staff members in harm's way. This outreach is detailed within the report, and Biden administration officials underscored the point in responding to questions about the documents.

Vasely could not be reached for comment. As The Post first reported earlier this week, he and other military leaders involved in the effort also told investigators that senior White House and State Department officials had failed to grasp the Taliban's steady advance on Afghanistan's capital and resisted efforts by the Pentagon to prepare the evacuation of embassy personnel and Afghan allies weeks before Kabul's fall.

President Joe Biden, asked Thursday by NBC News if he was rejecting the conclusions or accounts in the report, responded: "Yes, I am."

Asked if the accounts were true, he did not answer directly. "I'm rejecting them," he said.

Biden reiterated his belief that it was time for the U.S. military to withdraw.

"Look, there's no good time to get out, but if we had not gotten out, they acknowledge that we would have had to put a hell of a lot more troops back in. It wasn't just 2,000, 4,000," Biden said. "We would have had to significantly increase the number of troops, and then you're back in this war of attrition."

Pentagon spokesman John Kirby said the report shows that a lot of good people across the U.S. government "were working hard under incredibly difficult circumstances to make the best decisions they could in real time," and that effort was unprecedented.

"Nothing like this had been attempted since the end of the Vietnam War," he said. "Everyone's heart, up and down the chain, was in the right place."

A U.S. official, who like others spoke on the condition of anonymity citing the issue's continued sensitivity, said "it's important to keep in mind that these are interviews with investigators, not reporters."

"The people being interviewed weren't trying to score points, weren't messaging anyone," the official said. "They were simply doing their level best to help investigators get to the bottom of a terrible attack."

Biden administration officials have defended their planning in the lead-up to August's withdrawal, with White House press secretary Jen Psaki saying this week that the National Security Council convened meetings for months to assess the situation in Afghanistan and directed the pre-positioning of U.S. troops elsewhere in the region in case a crisis erupted. They could not have anticipated that the Afghan security forces would so completely wilt in the face of the Taliban's stunning advance, she said.

Biden sought to ensure the military had everything it needed to carry out the evacuation as it played out, administration officials said.

"The president, at least once at each meeting — and these meetings were daily — would directly ask the people who were on the ground in Kabul, 'Is there anything else that you need to execute what you've been asked to do?'" said Jon Finer, the White House principal deputy national security adviser.

The evacuation succeeded in extracting about 124,000 people before it ended around midnight on Aug. 31. But it required the U.S. military to strike an unusual security deal with the Taliban and surge more than 5,000 troops into the war zone to shore up the skeleton force of about 600 who were left in Kabul to protect American diplomats.

Vasely, in his interview for the investigation, acknowledged that not all of the outside intervention was problematic.

"There was all goodness in this, but the lesson learned is it was a distraction from the main effort as they were coming directly to the individuals on the ground trying to accomplish the task at hand," he said, adding that he "only can speculate" whether the confusion and competition was responsible for some American citizens and foreigners being left behind.

"That's accurate," Vasely responded. "I was being contacted by representatives from the Holy See to assist the Italian military contingent . . . in getting through groups . . . of special interest to the Vatican. That is just one of many examples.

"I cannot stress enough," the admiral added, "how these high-profile requests ate up bandwidth and created competition for already stressed resources."

"That was people in good faith trying to facilitate the evacuation of people they were concerned about," the official said.

Vasely told investigators that by Aug. 22 or 23, "it was clear we weren't going to get all Americans out" and that he "started having conversations at senior levels" of the U.S. government about extending the mission beyond the Aug. 31 deadline.

In Washington, Biden pledged in a news conference on Aug. 22 that no American who wanted to leave would be left behind. "I will say again today [what] I have said before: Any American who wants to get home will get home," the president said.

The White House official said the situation on the ground was changing rapidly, and the administration has continued to evacuate Americans since the military operation ended.

When the mission ended, State Department officials said they believed there were about 100 American citizens left in Afghanistan who wanted to leave. They revised that several times, eventually saying that more than 450 left with American assistance after the military evacuation concluded. The White House official said it is believed that everyone who wanted to leave now has.

Vasely told investigators that the administration briefly considered extending the evacuation operation into September, but the idea was scuttled after Taliban leaders had a "visceral response" to the proposal. While the militants had been helpful in providing security at the airport perimeter, Vasely said he feared they could shift to hostage-taking or trigger a surge of civilians onto the runway by launching indirect fire at parked aircraft and the runway.

Vasely said he advised Biden that it would be prudent to stick with the agreed-upon deadline. The White House official said senior leaders in Washington, including at the Pentagon, all thought it wise to end the operation in August.

Mark Jacobson, a former Pentagon official during the Obama administration, said Wednesday that he had heard frustrations from military officials about the unsustainable number of requests for help. The frenzy, he said, led several volunteer groups — many headed by American veterans of the Afghanistan war — to pass along the names of Afghans who had helped the United States and "were supposed to be at the front of the queue."

"Once it became the 'Hunger Games,'" volunteers "tried to get whomever we could through the gates," as former interpreters and other Afghan allies were being hunted by Taliban fighters outside, Jacobson said, alluding to the book and movie series in which people fight to the death.

Scott Mann, co-founder of Task Force Pineapple, a volunteer group that assisted Afghans during the evacuation, said he could see that military officials at the airport were swamped. His group sought to limit their communications with military officials to agreed-upon times, he said.

Mann, a retired Special Forces officer, said that he has discussed with U.S. troops who were at the airport whether his task force was helpful, and was assured that it was. Mann said the group received calls from lawmakers and very senior military officials who wanted to evacuate certain people, and that some of them had influence but chose to keep quiet through the chaos.

"Just about every volunteer group can tell you stories about lawmakers and other people with authority calling and saying, 'You need to get my guy out,'" Mann said.