Israel to probe if notorious spyware used illicitly at home

The government will form a committee to look into a series of reports by Calcalist, a Hebrew business daily, that law enforcement officials used NSO Group's Pegasus software without a court order to tap into the phones of citizens both prominent and obscure, including a key prosecution witness in former Prime Minister Benjamin Netanyahu's corruption trial.

Others allegedly targeted include an anti-Netanyahu protester, the former Israeli leader's son, high-ranking officials, and the heads of some of the country's biggest companies.

Israeli officials, including the minister in charge of police, initially denied any impropriety. But the police later backtracked, citing "additional findings," and on Monday, Public Security Minister Omer Bar-Lev ordered the investigation.

"The reports about Pegasus, if they are true, are very serious," Prime Minister Naftali Bennett said in a statement on Monday. "This tool (Pegasus) and similar tools, are important tools in the fight against terrorism and severe crime, but they were not intended to be used in phishing campaigns targeting the Israeli public or officials — which is why we need to understand exactly what happened."

This is the latest scandal linked to the embattled Israeli firm, which has been under scrutiny for years, but the first in its home country. Pegasus, which can be remotely installed in smartphones to extract even encrypted communications, has been allegedly used to target journalists, dissidents and human rights activists by foreign governments including Mexico, the United Arab Emirates and Saudi Arabia.

The surveillance technology has also allegedly been used to hack the phones of the leaders of France and Morocco, and at least nine U.S. State Department officials. The Biden administration has blacklisted the company, whose operations have been scrutinized most widely by the Pegasus Project, a group of media organizations that said it examined a leaked list of tens of thousands of individuals identified as possible surveillance targets for NSO clients.

NSO is privately owned and operated, but the licensing of its software to foreign governments has to be approved by Israel's Defense Ministry. The company defends its technology as a tool to fight terrorism and crime, and declined Monday to comment.

Following the international outrage generated by Pegasus's alleged abuse, the Defense Ministry in December imposed new restrictions on the export of cyber warfare tools. But critics said the sharpened definitions of terrorism and crime wouldn't prevent a government from abusing the technology.

Israelis were largely indifferent to the allegations of the software's abuse by authoritarian regimes or its reported use against Palestinians, but public backlash is mounting now that Pegasus was allegedly aimed at them.

"If this is true, this is an earthquake, things that resemble the dark regimes of the previous century that we must not imitate," Interior Minister Ayelet Shaked said on Twitter.

The uproar generated by the Calcalist expose has already affected Netanyahu's graft trial, Channel 13 reported on Monday. The Jerusalem District Court has canceled Tuesday's scheduled hearing, and asked the prosecution to submit a report on its examination of the allegations. 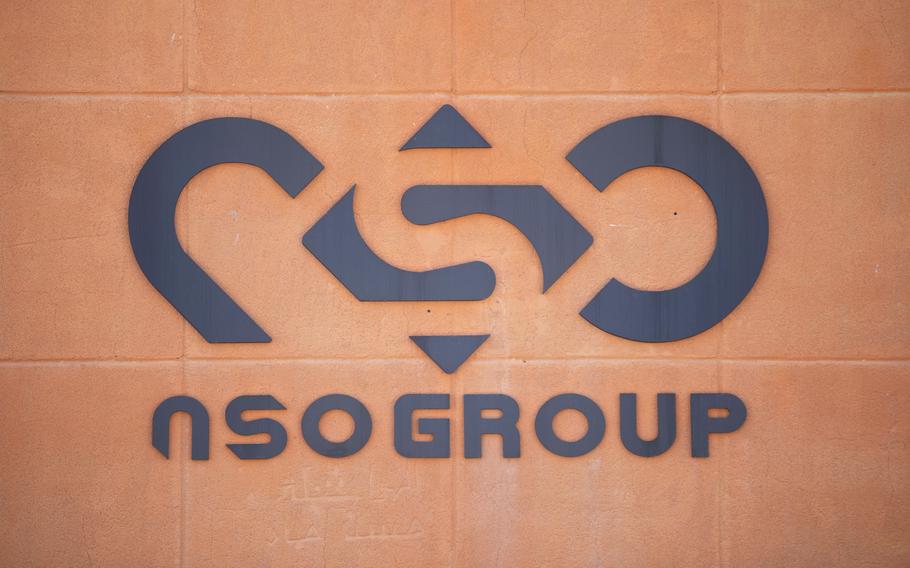 A logo adorns a wall on a branch of the Israeli NSO Group company, near the southern Israeli town of Sapir, Aug. 24, 2021. (Sebastian Scheiner/AP)