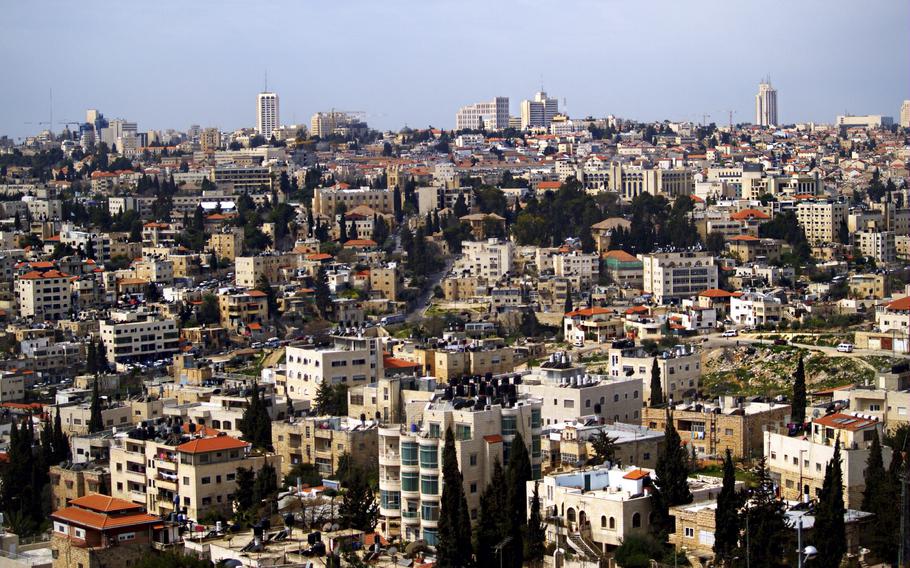 A view of Sheikh Jarrah neighborhood. In the background the city center of Jerusalem. (WikiMedia Commons)

JERUSALEM — Israeli police demolished a Palestinian home in predominantly Arab East Jerusalem early Wednesday, after a surprise overnight raid and the arrest of family members and protesters. The action ended a standoff in which some family members at one point barricaded themselves on the roof and threatened to blow up the structure.

Foreign governments and human rights groups condemned the eviction, one of several proposed in the flash-point Sheikh Jarrah neighborhood. Palestinians view the actions as an attempt to push them from the city that both Israelis and Palestinians consider their national capital. Violent demonstrations over planned evictions last year helped spark a two-week war between Israel and Hamas, the militant group that governs the Gaza Strip.

The case is similar but unrelated to other pending evictions in the neighborhood, where Jewish groups are trying to exercise property ownership claims predating Israel's existence at the expense of six Palestinian families who have lived in the disputed houses for decades. Those cases are awaiting final rulings by Israel's Supreme Court.

In the case of the home demolished Wednesday, the property was appropriated by the city of Jerusalem five years ago to make way for a neighborhood school. The family claimed to have purchased the property in the 1960s but was unable to prove ownership after a court battle, according to media reports. An Israeli judge ruled a year ago that the city could take the property for public use if the family was compensated.

On Monday, protesters arrived to block the planned eviction, and members of the family took to the roof with gas canisters, threatening to destroy the house in an act of suicidal resistance. Police withdrew to prevent violence, they said.

But officers returned in darkness early Wednesday, quickly taking control of the property after reportedly cutting electricity to the area. Some witnesses said the forces used stun grenades in the raid. Police detained about 25 family members and other activists, according to Reuters. Israeli police said the arrests were for "suspicion of violating a court order, violent fortification and disturbing public order."

Almost immediately, heavy equipment moved in to demolish the structure.

"It was a brutal act," Walid Abu Thaya, a lawyer for the family, said in an interview with the Haaretz newspaper. "We were in the process of appealing to the courts, including the High Court, but the police in the service of the Jerusalem Municipality were determined to carry out their mission."

The municipality said the raid was carried out only after it became clear the family would not comply with court rulings.

"Since the ruling was handed down, the Salahiya family has been given numerous opportunities to transfer the property in an agreed-upon manner, but they have refused to do so," the city said in a statement.

The U.S. Embassy, in an emailed statement, said, "We believe it is critical for all sides to refrain from unilateral steps that exacerbate tensions and undercut efforts to advance a negotiated two-state solution. This certainly includes the evictions of families from homes in East Jerusalem in which they have lived for generations."

The British government, which maintains its Jerusalem consulate in the same part of the neighborhood, released a statement urging Israel not to engage in practices that threaten to "increase tension on the ground."

Some elected city officials had beseeched the government to delay the eviction until the family exhausted possible legal remedies.

Others said the city had a clear right to condemn the house on behalf of a public project. Public Security Minister Omer Bar-Lev said critics should welcome development that will serve Palestinian residents of Jerusalem.

"The site is designated for the construction of classrooms and kindergartens for special education that will benefit the Arab children of the neighborhood," Bar-Lev said in a tweet.