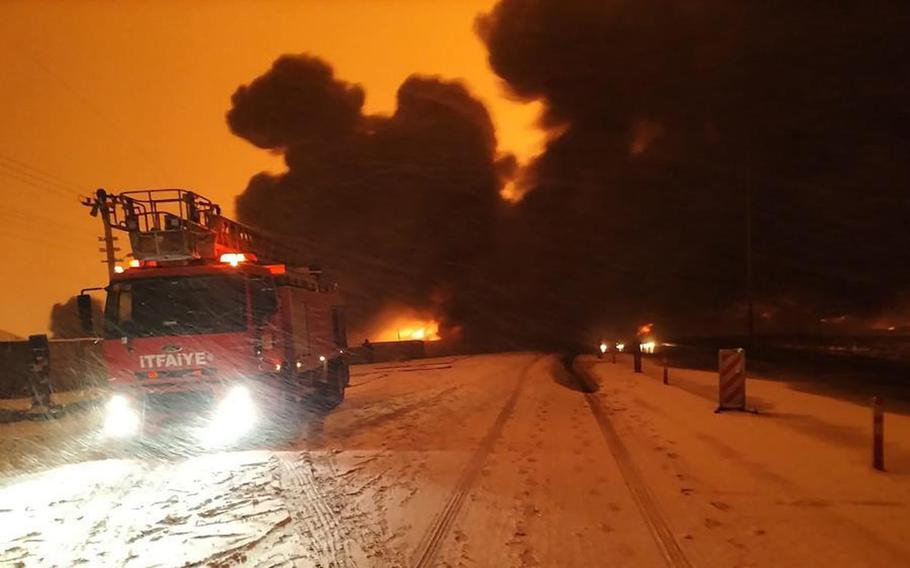 A video screen grab shows smoke rising from an oil pipeline near the town of Pazarcik in the Kahramanmaras province, Turkey, Tuesday, Jan. 18, 2022. (IHA agency)

Turkey reopened a key crude pipeline running from Iraq after it was knocked out by an explosion on Tuesday.

Oil prices pared gains on Wednesday after news the restart was imminent. The shutdown risked tightening energy markets even more at time when supply disruptions and strong demand have sent crude surging to almost $89 a barrel.

Flows through the conduit, consisting of two lines in the blast area and which carried more than 450,000 barrels a day last year, have returned to normal levels, according to a senior Turkish official.

National energy company Botas is using one of the lines and repairing the other after it was damaged, the official said.

The explosion happened after a power pylon fell on a pipeline during bad weather, causing a fire, according to the governor of the southern Kahramanmaras province, where the incident happened. Earlier, officials were investigating whether sabotage was to blame.

The pipeline brings oil from northern Iraq to Europe via the Mediterranean port of Ceyhan and runs close to the Syrian border. The incident is the latest in a series of supply shutdowns the market has suffered in recent months.

Global crude inventories are already near the lowest level since October 2019 with the omicron coronavirus variant not reducing demand much and production problems in Libya and Kazakhstan. Goldman Sachs Group Inc. has predicted Brent will hit $100 a barrel in the third quarter.

The conduit consists of two pipes running side by side, with the crude then loaded onto tankers and shipped mostly to European refineries. The oil is a mix of barrels exported on behalf of the central government in Baghdad and the Kurdish Regional Government, which controls the northeast of the country.

The Iraqi central government said its exports through the line would not be affected by the shutdown.

The pipelines have been attacked in the past by militants from the Kurdistan Workers' Party or the PKK, designated a terrorist organization by the Turkish government, the U.S. and the European Union. The explosion came days after Turkey's army killed dozens of Kurdish militants in Syria in response to the deaths of three Turkish soldiers in roadside bomb attack.

There are about 2 million barrels of Iraqi oil stored in tanks at Ceyhan, according to port agents, meaning the terminal could continue exports for several days even without new flows.

Two tankers are berthed at Ceyhan to load Iraqi crude, according to ship-tracking data available on Bloomberg. The vessel T. Semahat was set to load about 800,000 barrels for Iraq's state oil-marketing company, known as Somo. There's enough oil stored at Ceyhan for the Kurdish Regional Government to fill the tanker Vilamoura, currently berthed there, and two other vessels, according to the tracking data and port agents.