As Afghanistan's harsh winter sets in, many are forced to choose between food and warmth 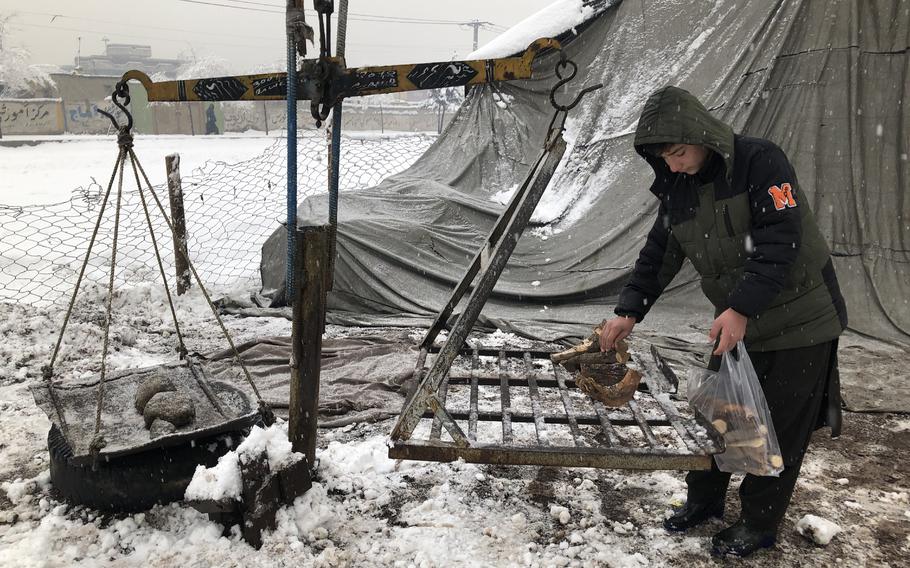 A few sticks of firewood, weighed on a scale and sold for half a dollar, are all that the family of this boy and many others can afford to heat their homes for one night during this snowy winter in Kabul, Afghanistan, on Jan. 4, 2022. (Pamela Constable/The Washington Post)

KABUL, Afghanistan — The snow started falling early, prettily dusting trees and fences in the Afghan capital this week but turning unpaved neighborhood alleys into treacherous sludge. In many poor homes, the heat provided by used coal chips and wood scraps in old metal stoves had died long before daybreak.

Mahmad Ewaz, 28, a former tenant farmer and father of four who fled fighting in Helmand province two years ago, listened to his 1-year-old daughter coughing and contemplated a single log resting in the corner. The pantry in the family's mud-walled home in west Kabul held only a few onions and potatoes, and the stove was dark. It was too cold for his boys to go out and scavenge, so he reached for the log and started shaving off pieces.

"The authorities tell us it is safe to return home now, but we have nothing left there," Ewaz said with a sigh on Tuesday. Life in the city, though, has become much harder since the Taliban took power again in August. He earns less than a dollar a day, sewing soles onto shoes, and the cost of heating fuel has risen far beyond the family's means. "At least this log will give us a few more hours tonight," he said.

The country's new rulers, cut off from most international aid as well as Afghan government assets held in U.S. accounts, have scant resources to protect millions of vulnerable people against another harsh winter. Aid groups estimate that nearly 23 million Afghans, out of a total population of 39 million, already do not have enough to eat. Many also lack solid shelter and money to heat their homes at night, forcing them to choose between food and fuel, and creating additional potential for a full-fledged humanitarian disaster, aid officials said.

Many Afghans were living a meager existence before the Taliban's takeover. But others are part of a large, newly impoverished urban working class that mushroomed after the sudden collapse of the vast, foreign-funded war and aid economy.

"Everywhere we go, we find thousands more people who need help," said Babar Baloch, a spokesman for the Office of the U.N. High Commissioner for Refugees in Geneva. "They haven't been driven from their homes, but they have lost their jobs, they have no savings, and their life systems are in collapse. They are not on our lists, but they come and wait outside the distribution sites, saying, 'What about us?'"

The agency is providing food, blankets, and cash for heating fuel to 70,000 people a week in Kabul. Its major focus is on families displaced from rural areas by conflict, a group that swelled from 3.5 million to more than 4 million last year as Taliban fighters swept across the country. With the war at an end, UNHCR officials said, it is safer to deliver aid, but many of the neediest do not meet their strict criteria.

This winter, the World Food Program has also expanded its operations to provide basic food commodities or cash to the neediest families, such as those headed by widows or jobless breadwinners. Program officials say they assisted 8 million people in December and expect to reach 12 million this month.

In addition to providing food aid directly, the program uses cash and "value vouchers" through local banks, mobile networks and money transfer agencies. The vouchers, worth between $59 and $79 depending on the level of need in each area, allow people to purchase their own food or other necessities.

"Nothing goes to the government," said Shelley Thakral, a spokeswoman for the program in Kabul.

On Tuesday, as snow fell steadily from a slate-gray sky, more than 2,000 men and several hundred women lined up outside a warehouse in the impoverished Karte Naw district, waiting for handouts of flour, beans, salt and cooking oil provided by the World Food Program. Shouts of protest erupted periodically when people without the required paperwork were turned away. Beside a cold stove in their frigid two-room house in Kabul, a son of Mahmad Ewaz, a rural war refugee, tries to comfort his baby sister and keep her warm in Kabul, Afghanistan, on Jan. 3, 2022. (Pamela Constable/The Washington Post) 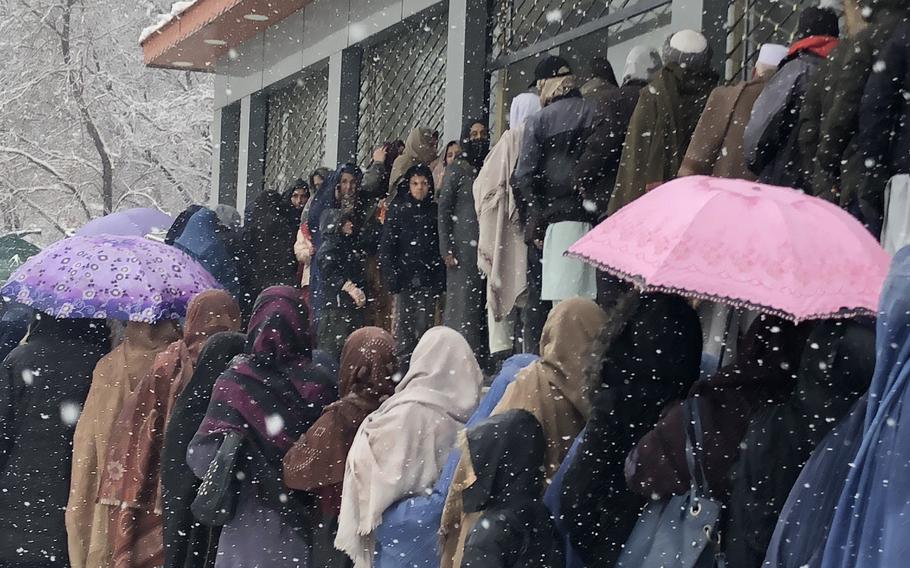 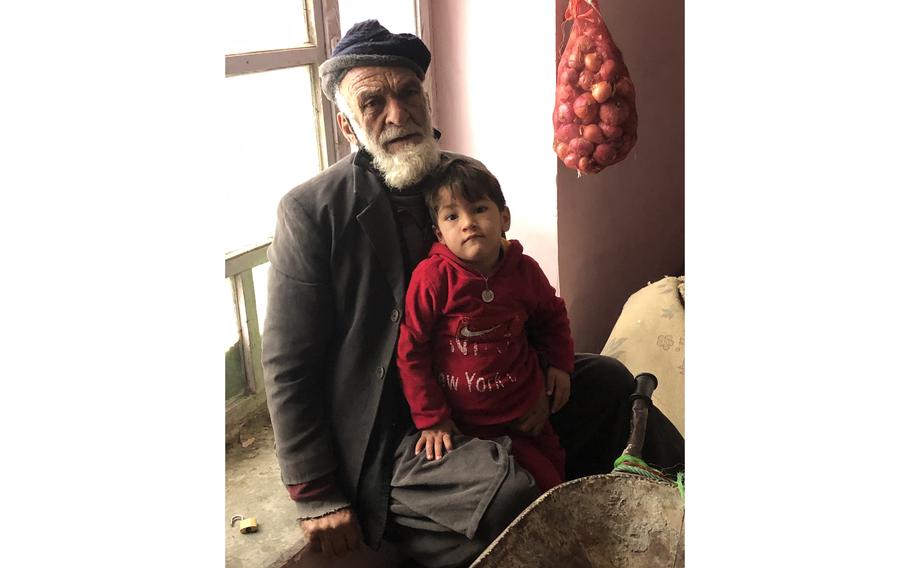 Abdul Hadi sits with his grandson Yasin and the wheelbarrow he pushes for hire in Kabul, Afghanistan, on Jan. 4, 2022. (Pamela Constable/The Washington Post)

As the lines inched forward, approved applicants - war widows, idled construction workers, people caring for ill relatives at home - emerged from the warehouse with signed white tickets in their hands. Then they followed porters with wheelbarrows who trundled heavy flour sacks and other supplies to waiting taxis.

Along a nearby boulevard, women covered by burqas crouched in snowbanks and held out their hands to cars crawling past. An elderly man clutching an empty sugar sack said his family had applied for food assistance but had not heard back. His plan for the day was to knock on doors, ask people if they needed their walks shoveled, and hope they would put a few potatoes or carrots in his sack as payment.

"My life is hard, but it gets much harder in winter," said Abdul Hadi, 75, who works as a wheelbarrow porter in warmer weather. A few yards down a slushy alley, his daughter and several grandchildren were huddled around a woodstove in one of two rented rooms. Hadi's battered metal barrow was in the other, piled with flattened cardboard to feed the fire. "We don't even have enough money for bread," he said, his face crumpling in defeat. "It's the same story in every family. Please tell the world to help us."

Coal and wood sellers, waiting inside fenced yards piled high with stacks of firewood from the eastern Afghan forests and sacks of coal from the northern mountains, drew only a trickle of customers this week despite the widespread, desperate need for heat. One boy of 12 trudged through the snow to buy 20 sticks of firewood, watching closely as his order was weighed and handing over 50 cents. He said it would last the family one night.

"People can't afford to buy now, and we can't afford to sell," said Shahwali Khan, 50, warming his hands over a small fire at his fuel-supply yard in a poor Kabul district. "Everything is connected. The government has collapsed, people have no salaries, and the economy has gone to zero." In past winters, he said, "even ordinary people would take home 100 kilos [of wood] at a time. Today I will be happy if I sell 20 kilos by dark."

Although the cash-strapped Taliban government has almost no means to help the poor, it has been coordinating closely with foreign aid programs, largely by providing armed escorts for supply trucks and security for crowded distribution sites. All supervisors and workers at the sites are Afghans. Officials who interact with the poor, such as needy people who come to the gates of the Refugees Ministry, also pass on their requests for help.

Mufti Abdal Motalib, the Refugees Ministry spokesman, said his office has been working with several foreign agencies, including the U.N. refugee agency, without touching any of the funds they receive. In rural areas where aid distribution was once curtailed by fighting, he said, the new authorities now help deliver it from provincial centers. "The [charities] have relations with the international banks, and we try our best to facilitate their work," he said. "We want as many Afghans to be helped as possible."

By early Thursday, the sun had reappeared but the weather was bitterly cold, and more snow was expected. Outside a long-abandoned grain elevator, Taliban police stood guard while cargo trucks arrived from warehouses, carrying wheat from Kazakhstan, rice from Tajikistan and cooking oil from Russia. Afghan officials from the German charity World Without Hunger supervised, while rows of wheelbarrows were loaded with food sacks and plastic bags of personal supplies, including toothbrushes, disinfectant, towels and shampoo. In two weeks, they said, they will start distributing blankets and overcoats.

At 9 a.m., the first of 221 families on the day's list began to arrive. One woman named Parasto, speaking from beneath a burqa, said her husband had once worked repairing car batteries but was disabled. She said her two sons, 12 and 9, go to school in the mornings, then earn a little money by selling plastic bags for people to burn in their stoves.

Mustafa, the older boy, was blowing on his chapped hands. "It's cold work," he said, "and I get cold fast."