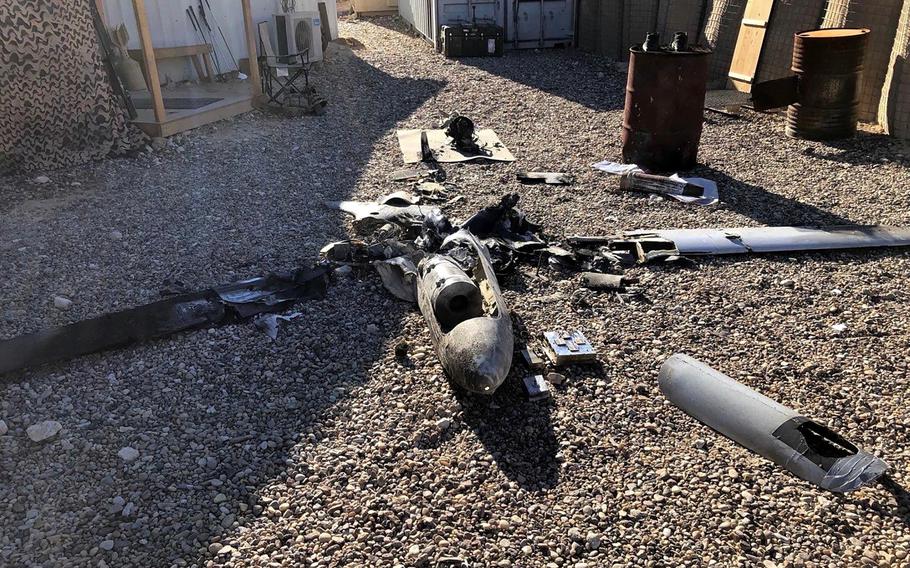 Parts of the wreckage of a drone are laid out on the ground near the Ain al-Asad airbase, in the western Anbar province of Iraq, Tuesday, Jan. 4, 2022. (International Coalition)

Two fixed-wing drones rigged with explosives were shot down Tuesday near a base in Iraq that houses American troops, the second such incident in as many days, officials said.

The unmanned aircraft were downed outside the perimeter of al Asad Air Base, in Iraq’s western Anbar province, the Iraqi government’s Security Media Cell said on Twitter.

Although U.S. troops remain in Iraq to advise its security forces in the fight against Islamic State, the base is home to Iraqi troops, said an official with the U.S.-led coalition fighting ISIS.

“These are attacks against Iraqi installations, an attack against the Iraqi people and the military that protects them,” said the official, who spoke on condition of anonymity. “We maintain a minimal footprint on Iraqi bases. The coalition no longer has its own bases in Iraq.”

Two other drones were shot down early Monday near another base housing coalition forces close to Baghdad airport, the coalition’s press office said Monday by email.

There were no reports of injuries or damage from either incident.

The thwarted attacks came as groups backed by Iran marked the two-year anniversary of the U.S. drone strike at the Baghdad airport that killed Qassem Soleimani, a top Iranian general.

Soleimani was the head of Iran’s elite Quds Force. He was killed alongside Abu Mahdi al-Muhandis, deputy commander of Iran-backed paramilitary groups in Iraq.

Iraq’s Shiite factions, aligned with Iran, have vowed revenge for the killing and are seeking the full withdrawal of American troops from the country.

The U.S.-led coalition formally ended its combat mission against ISIS last month, weeks ahead of Dec. 31 deadline, but some 2,500 troops remain as advisers.

Iraqi officials told some media outlets that one of the explosive-laden drones in Monday’s foiled attack in Baghdad had the words “Soleimani’s revenge” painted on its wing.

Coalition counter-rocket, artillery and mortar systems shot down that pair of drones, the press office said in the Monday email.

In response to Stars and Stripes, the coalition official said only that the drones outside al Asad were “engaged and destroyed by defensive capabilities,” but an official told the BBC that C-RAM systems were also used there.

The U.S. military sent C-RAM systems to protect American installations and Patriot missile batteries in Iraq after a series of deadly attacks targeting the facilities in 2019 and 2020. Attackers began using drones in April 2021.

The U.S. military sent C-RAM systems to protect American installations and Patriot missile batteries in Iraq after a series of deadly rocket attacks targeting the facilities in 2019 and 2020. Attackers began using drones in April 2021.

The U.S. blames Iran-backed militias for the rocket and drone attacks, and it has retaliated with strikes on facilities used by the militants in Iraq and Syria.

This week also marks the second anniversary of Iranian ballistic missile attacks on al Asad and a coalition-occupied base in the northern city of Irbil.

Iraqi officials toured both bases last month to verify the absence of coalition combat troops after the mission transitioned to an advise-and-assist role, the coalition said.