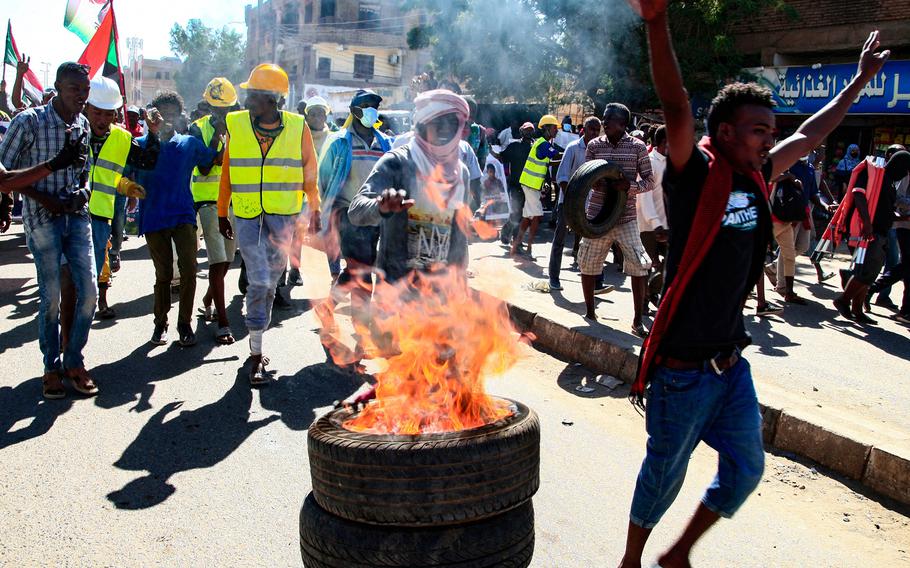 Sudanese demonstrators take to the streets of the capital Khartoum as tens of thousands protest against the army's Oct. 25 coup, on Thursday, Dec. 30, 2021. (AFP)

(Tribune News Service) — Sudanese security forces clashed Thursday with protesters demonstrating the military’s seizure of power in October, with the unrest leaving at least 3 dead in the capital.

Dozens more were injured as authorities fired live rounds and tear gas to disperse the crowd of thousands who were massed by the presidential palace in Khartoum. The independent Doctors Committee and the United Office of Doctors confirmed the death toll in separate statements.

Anger has mounted in the nation after the military’s Oct. 25 seizure of power — a move that triggered seismic concerns that a shift to civilian rule after the regime of President Omar Al-Bashir was in peril. Authorities, looking to quash the unrest, have cut off internet and phone service.

The clampdown by the military comes at a difficult time for Sudan, whose economy has been struggling to rebound. International donors, including the U.S. and development agencies, have suspended hundreds of millions of dollars in aid. In addition, Sudan’s eligibility for $50 billion of debt relief through International Monetary Fund programs is also in question.

The pan-Arab satellite channel, Arabiya, reported that it’s office, which also hosts Hadath television, had been raided and some staff beaten. The Sudanese Journalists Network also said security forces raided the offices of other channels.