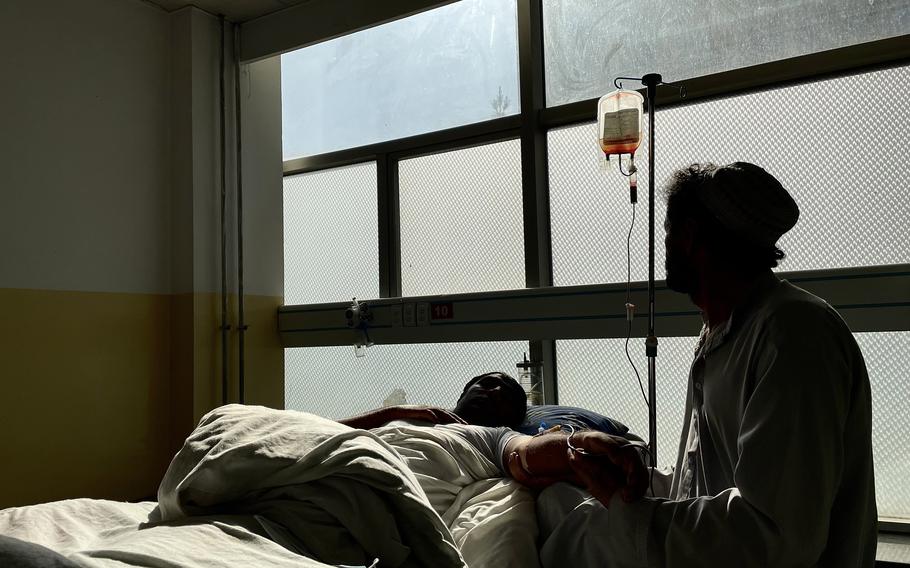 A nurse attends to a patient in Kabul's Jamhuriat hospital's emergency ward, in November. The ward has run out of critical supplies including dressings and insulin following the near halt in aid to Afghanistan. MUST CREDIT: Washington Post photo by Susannah George. (Susannah George/The Washington Post)

The Biden administration is facing mounting pressure from lawmakers, aid groups and former officials to restart the flow of billions of dollars in aid and cash to Afghanistan, where a humanitarian crisis is growing increasingly perilous.

Last week, three former U.S. military commanders in Afghanistan and four former U.S. ambassadors to Kabul, along with other former senior officials, called on the administration to consider relaxing policies that froze the Afghan government's foreign assets and cut off U.S. financial assistance that, along with other donor funding, once accounted for three-quarters of that nation's revenue.

"What is needed is the courage to act," the authors said in a statement published by the Atlantic Council. They noted United Nations estimates that only 5% of Afghanistan's about 40 million residents have sufficient food as well as that 97% of the population will fall below the poverty line in the next 18 months, saying the United States has "a reputational interest and a moral obligation" to help save them.

In a separate letter last week to Secretary of State Antony Blinken and Treasury Secretary Janet Yellen, nearly 40 bipartisan members of Congress, including the Democratic chairs of the main national security committees in the House, also appealed to the administration to consider new steps.

"We don't want to help the Taliban, but we don't want to see Afghans starving in the winter either," said Rep. Tom Malinowski, D-N.J., who helped to spearhead the effort. "We want the millions of Afghans who are not going to leave the country, but who are trying to defend the gains of the last 20 years, to know that the United States is still behind them."

"If you want to help people survive the winter," Malinowski said in an interview, "you can't wait until spring."

Long-standing sanctions against any dealings with the Taliban and a cash crunch have choked off commerce in a country suffering from the combined impact of lost income, spiraling prices for basic necessities and prolonged drought.

"There is no simple solution here," said a senior administration official, one of several who spoke on the condition of anonymity to discuss internal policymaking. "Years of war and drought, on top of the Taliban's forced takeover of the country and the absence of a functioning financial system have precipitated the severe humanitarian crisis we are witnessing now."

"Reserves, salaries, [humanitarian] assistance or other tools will not be enough" to deal with "the systemic economic challenges Afghanistan is facing," the official said.

Some steps have been taken, including the U.S. provision of more than $208 million in money for humanitarian aid, funneled through international agencies to avoid the Taliban. The Treasury Department issued licenses that eased sanctions to allow money flows for emergency food, medicine and shelter, and the transfer of cash remittances to non-sanctioned individuals in Afghanistan. The department also told foreign banks and governments they do not need to fear U.S. prosecution engaging in such activity.

The World Bank, following a decision by its U.S.-dominated board of governors, released $280 million from its otherwise-frozen Afghanistan Reconstruction Trust Fund last week, with part of the money designated to a U.N. program that directly pays salaries to health-care workers. Officials said the program soon may expand to include teachers and other civil servants, many of whom have not been paid for most of the year.

But those efforts have been largely piecemeal and don't address the systemic problems of a nonfunctioning economy. Money remains the primary source of leverage to influence the new Afghan government; in addition to what the Biden administration says are legal impediments to opening the spigots, there is pressure from other lawmakers and some inside the administration to do less instead of more to rescue the Taliban from problems of its own making.

"The reason the economy is not working is because the Taliban deposed the government" and they're "still working to figure out" how to run the economy, said a senior Treasury official who also spoke on the condition of anonymity. "There is more money moving into the economy than people think," but large amounts are heading right back out, he added, citing a December U.N. estimate of $10 million a day.

The official said the people of Afghanistan "don't have confidence" in the Taliban government, which is formed of militants with a bad track records of abusing human and civil rights, and so they are taking their money, "storing it in their house or moving it out of the country" to foreign banks.

The idea of returning to business as usual in Afghanistan is anathema to many, according to several people familiar with the internal deliberations. Since August, Taliban progress has ranged from little to none in meeting U.S. and international demands, including an end to providing safe haven for groups such as al-Qaida; inclusion of non-Taliban officials in the government; nationwide guarantees of full rights for minorities and women; and public school through grade 12 for girls as well as boys.

But a growing number of administration officials, particularly in the U.S. State Department, are pushing for more flexibility, with some arguing that the Taliban has been more cooperative in addressing international concerns than it is given credit for. The administration, these officials say, must decide whether it wants the government in power to fail or if it wants to use its influence in ways that help more Afghans survive.

Laurel Miller, a senior official for Afghanistan during the Obama and Trump administrations who is now at the independent International Crisis Group, voiced concerns similar to those expressed by a number of current officials who are reluctant to speak out publicly.

"I recognize that it's very difficult, in the immediate aftermath of losing a war, to contemplate supporting a state that is run by your former enemies," she said. "But the Afghan people need a state that functions, to at least a minimal degree. There is no way to entirely circumvent the Taliban if you're going to prevent the continued collapse of the entire economy."

Humanitarian organizations say that the foreign donor assistance they are distributing, in the form of food, shelter and medicine, will never be enough. And time is running out as Afghanistan's basic institutions and infrastructure fall apart - including sanitation, electricity, transportation and other systems established over 20 years with U.S. funding and expertise.

One of the endangered institutions is Afghanistan's Central Bank, established in the rewritten 2004 constitution and modeled on the U.S. Federal Reserve. Four of the Bank's board members remain in Afghanistan; others are abroad.

Shah Mehrabi, a board member who also teaches at Montgomery College just outside Washington, has proposed that the Biden administration allow the limited, monitored release of about $150 million to $200 million a month from the bank's overseas reserves. That is about half of what the Central Bank formerly sold monthly at auction, Mehrabi said, but enough to provide currency stability, allow continued individual bank withdrawals and pay for essential imports.

"The Central Bank remains intact, following the laws based on which it came into being - an autonomous entity, independent, with no intervention by the government at all as to how to conduct fiscal policy," said Mehrabi, chairman of its audit committee.

When the Taliban entered Kabul in mid-August, Mehrabi said, he ordered all Central Bank reserves held in the vault at its headquarters to be counted. That $63 million in Afghan currency, U.S. dollars and gold since has been drawn down to circulate cash in the economy, allowing Afghans to withdraw up to $400 a week from their bank accounts, pay some salaries and purchase imports.

The reserves held overseas - totaling more than $10 billion, $7.1 billion of it held in the U.S. Federal Reserve - in normal times are constantly rolled over, as foreign currency is deposited from trade, portfolio investments and other sources, then auctioned off in international markets and used to inject liquidity and regulate markets at home.

With Afghanistan's funds now frozen by the Biden administration and European banks, the Central Bank cannot perform any of those functions.

The auctions are conducted electronically, and auditors could monitor their use inside Afghanistan, Mehrabi said; if there was any Taliban misappropriation, "they can cut off the funds."

The Biden administration says that releasing the money is far more complicated than it appears, even if the administration wanted to, because of existing sanctions on the Taliban as an organization and on individual militants.

For the moment, officials said, it is legally impossible. All of Afghanistan's U.S. reserves are the subject of litigation by victims of the Sept. 11, 2001, al-Qaida attacks in this country and other terror victims who have won monetary judgments against the Taliban. While the money previously was off limits as property of the non-Taliban Afghan government, the equation changed when the Taliban itself became the government, the victims have argued since.

A federal court has attached the money. A hearing on the matter that had been scheduled for Dec. 3 was postponed until late January at the Justice Department's request.

Even if courts deem the Taliban in charge of Afghanistan, no country has recognized it as the legitimate government. The Taliban remains a specially designated terrorist organization, and none of its officials would be recognized as having the legal right to sign for the government or receive a check, people familiar with the situation said.

Mehrabi said proposals for circumventing the Central Bank to inject money into Afghanistan - using the U.N. to distribute cash through the private banking system, for example - would create a "parallel institution" that would destroy the one that already exists.

The Treasury official countered that the Taliban has taken no steps to preserve the Bank. They "haven't gotten control of the economy. The Central Bank has set no interest rate, capital controls or taxations," the official said.

Ronald Neumann, who served as U.S. ambassador to Afghanistan during the George W. Bush administration and now heads the American Academy of Diplomacy, said leakage of aid funds to the Taliban could be minimized but probably not eliminated entirely.

"If you're immobilized by the search for a perfect solution," Neumann said, "a lot of people are going to die."