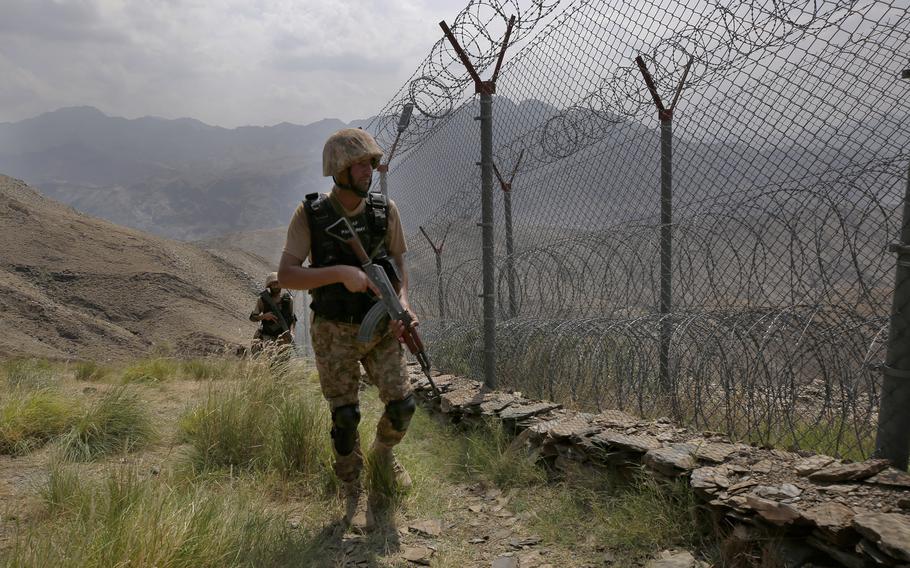 KABUL, Afghanistan — Thousands of Taliban fighters and supporters have poured into Afghanistan from Pakistan over the past four months, answering the calls of influential clerics and commanders eager to consolidate control of the country, according to interviews with half a dozen current and former Taliban members in Pakistan and Afghanistan.

Senior Taliban leadership urged fighters, Afghan refugees and madrassa students in Pakistan to come to Afghanistan to help the group maintain security as it made a string of sudden territorial advances this summer that created an urgent need for reinforcements, the current and former Taliban members said.

"Many of our mujahideen were offered permanent residences in Afghanistan if they wish to move here," said one Pakistani Taliban fighter who aided in the recruitment effort from a madrassa in northwest Pakistan. He, like others in this report, spoke on the condition of anonymity because he was not authorized to speak to the press.

The surge in Taliban fighters and supporters from Pakistan is bolstering ranks as the movement grapples with security threats, economic collapse and a deepening humanitarian crisis. But the source of the additional forces is also stirring long-held tensions with Pakistan at a critical time for Taliban leadership as it focuses on maintaining unity in the face of multiple crises that have the potential to undermine the group.

The movement of Taliban fighters and supporters between Afghanistan and Pakistan for education, medical treatment, training and fighting is nothing new. But this year it intensified.

The Taliban is estimated to have about 75,000 fighters in its ranks. The size of the recent influx from Pakistan is believed to range between 5,000 and 10,000, according to Taliban commanders, as much as 10 times higher than an average fighting season.

Pakistani Prime Minister Imran Khan praised the Taliban's military takeover of Afghanistan, saying it broke "the chains of slavery." Pakistani's intelligence chief traveled to Kabul in October, and Khan is one of the most vocal world leaders calling for international recognition of the Taliban.

But many Pakistanis blame instability in Afghanistan for militant attacks on their own soil, something they fear will increase with the Taliban in power. One powerful group is the Pakistani Taliban, known as Tehrik-e-Taliban Pakistan, or TTP, which is distinct from the Afghan Taliban but has thrown its support behind the neighboring rulers.

"The Pakistani border has been almost completely fenced. It was a long and porous border earlier, but that's no more the case," he said, speaking on the condition of anonymity to discuss the matter candidly. "Yes, we have still millions of Afghan refugees and people come and go to Afghanistan. But to say that thousands of fighters cross the border, that is baseless."

Calls by Taliban for more fighters from Pakistan began over the summer as Afghan government-held provincial capitals fell in quick succession. But after the militants took Kabul, Taliban leaders also began calling on educated Taliban members and supporters in Pakistan to join the group's nascent government.

"The recruiters came to mosques, training camps and the madrassas. Many of the students even left for Afghanistan before they completed their studies and had their turban ceremony," said Quduratullah, an Afghan Taliban fighter, referring to a prestigious graduation ceremony. He spoke on the condition that only his first name be used because he was not authorized to speak to the press.

Under normal circumstances, students studying at madrassas in Pakistan — schools that teach the Koran and are often criticized as incubators of radicalism in that country — would wait to complete their studies or for scheduled breaks to fight in Afghanistan with the Taliban.

This year, clerics handed out waivers allowing students to pause their classes to serve in Afghanistan without having to begin the curriculum again from the beginning, Quduratullah said.

The 29-year-old Taliban fighter has lived between Pakistan and Afghanistan most of his life, regularly joining the Taliban's ranks for the group's spring fighting season. This year the atmosphere was unlike any he had experienced. "It was full of excitement and joy," he said.

There was also a change in kinds of Taliban fighters and supporters who were making the trip to Afghanistan. He said he saw more people from madrassas and people with university educations, especially after the group took control of Kabul.

"Of course this will change the movement," he said, referring to the influx of thousands, especially those with higher education.

"These people are planning" Afghanistan's future, he said, "but like all revolutions in all countries this will take time." The lack of experience among the recruits means change could take years, not months, he said.

On the heels of the rush of fighters and supporters, Islamic schools and military training centers that served as key steps along the recruitment pipeline have also begun moving into Afghanistan. The Pakistani Taliban member involved in sending fighters to Afghanistan said more and more Taliban training centers are being set up inside Afghanistan, where conditions are preferable to quickly train recruits.

"It's easier now to get training in Afghanistan because all kinds of weapons are available there," said the Pakistani Taliban member. He said many of the Taliban's top trainers have also relocated to Afghanistan from Pakistan where it's now safer for them to operate.

After sweeping to power, the Taliban found its forces stretched thin. While the group controlled more than half of Afghanistan's territory, its gains over the summer suddenly put its fighters in charge of securing urban centers where most of country's population lives.

Attacks claimed by the Islamic State's Afghanistan branch are on the rise, and after an initial plunge in crime, reports suggest the worsening economy is causing that to rise as well.

"Definitely, security is the top priority for the Emirate [Taliban leadership] right now. There are a number of security challenges including the Daesh and also keeping the crime rates under control," said a pro-Taliban Pakistani cleric who has supported the group logistically from Pakistan for years. Daesh is the Arabic acronym for the Islamic State.

After the fall of Kabul, the cleric said Pakistani doctors traveled to Afghanistan to support the health care system there and advise the Taliban's ministry of health.

Afghanistan is in dire need of educated, experienced bureaucrats to provide people with basic services. The massive U.S. airlift, ongoing evacuation efforts and fears among many former government employees of Taliban reprisals have gutted the country's professional workforce.

The cleric said he is unaware of any Pakistani engineers or university-level professors traveling to Afghanistan but knows of some who are advising the Taliban remotely by phone and with messaging services.

"It's not only about war and fighting," said Afrasiab Khattak, a former Pakistani senator and Pashtun nationalist leader. The recruitment will also funnel people into government positions so employees of the former Afghan government can be demoted or fired, he said. "The Taliban don't trust the old government people."

"Priority should be given to the Taliban who are already here in Afghanistan," he said and predicted that if the practice continued, it will only fuel opposition to the Taliban's rule.

Quduratullah, the Afghan Taliban fighter, said there is deep suspicion of fighters like himself who have spent much of their lives in Pakistan. Millions of Afghan refugees who fled war have lived in Pakistan for decades. Many lack the rights that would allow them to work and live freely in Pakistan, putting them at an economic disadvantage and making the population ripe for radicalization or recruitment.

Most of the Taliban fighters and supporters flowing from Pakistan into Afghanistan are Afghan according to the Taliban member in Pakistan involved in recruitment efforts.

"Ordinary people, even my family, yes of course they criticize us [for living in Pakistan]," Quduratullah said. "But it is because they are ignorant. Personally, I am extremely opposed to Pakistan because it is not a true Islamic government."

He said he lives part of the year there because the rest of his unit does the same. He listed dozens of instances of harassment at the hands of Pakistani police due to his Taliban ties including multiple detentions, one resulting in jail time.

The influx from Pakistan could initially deepen distrust between many Afghans and the Taliban movement, he conceded. "It will make it more difficult to convince the ordinary people [who do not already support the Taliban] that we do not just follow Pakistan's orders, but in time they will see," he said.

"We defeated the United States," he said. "That is the only evidence you need to know we are a nationalist movement for Afghanistan."

Khan reported from Peshawar, Pakistan. The Washington Post's Shaiq Hussain in Islamabad, Pakistan, and Aziz Tassal in Houston contributed to this report.