by
Joby Warrick and Souad Mekhennet
• The Washington Post • December 13, 2021 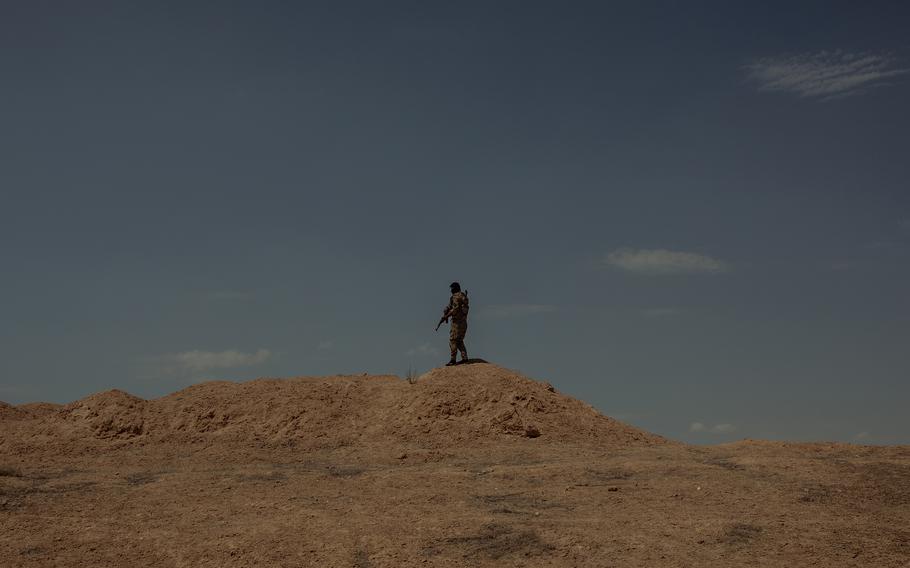 A member of the commandos unit of the Syrian Democratic Forces stands on a sand berm in the eastern part of Syria's Hasakah province during what was thought to be a security threat on the road between Raqqa and Dashisha on Aug. 3. (Nicole Tung/The Washington Post)

Just after midnight on June 8, Israeli warplanes streaked across the country's northern frontier for a highly unusual airstrike deep inside Syrian territory. The jets fired missiles at three military targets near the cities of Damascus and Homs, killing seven soldiers, including a colonel described in local news accounts as a "hero martyr" and an engineer who worked at a top-secret Syrian military lab.

The Israel Defense Forces, following standard practice, declined to comment on the incursion into Syrian airspace. But intelligence analysts in Western capitals quickly observed a distinction in the operation: While previous Israeli attacks in Syria nearly always targeted Iranian proxy forces and arms shipments, the June 8 strike was aimed at Syrian military facilities — all with links to the country's former chemical weapons program.

An explanation emerged in the weeks that followed. According to current and former intelligence and security officials briefed on the matter, the June 8 strike was part of a campaign to stop what Israeli officials believe was a nascent attempt by Syria to restart its production of deadly nerve agents.

Israeli officials ordered the raid, and a similar one a year earlier, based on intelligence suggesting that Syria's government was acquiring chemical precursors and other supplies needed to rebuild the chemical-weapons capability that it had ostensibly given up eight years ago, according to four current and former U.S. and Western intelligence officials with access to sensitive intelligence at the time of the strikes. They spoke on the condition of anonymity to discuss classified material and their understanding of Israeli deliberations.

The attacks reflected grave concerns that arose within Israeli intelligence agencies beginning two years ago, after a successful attempt by Syria's military to import a key chemical that can be used to make deadly sarin gas, the officials said. The worries grew as intelligence operatives spotted activity at multiple sites that pointed to a rebuilding effort, the officials said.

Asked for comment, Israeli officials would neither confirm the attacks nor elaborate on the reasons behind them. Syria strongly condemned the Israeli attacks at the time, and government officials have repeatedly denied using, or making, chemical weapons since 2013.

The prospect of a reconstituted chemical weapons program in Syria is regarded as a direct threat to the security of Israel, and perhaps other neighboring countries. While Syrian leader Bashar al-Assad famously used chemical weapons against his own citizens dozens of times since the start of the country's civil war, Syria's once-vast chemical arsenal was originally intended for use in a future war with Israel.

"It is a strategic weapon for the regime," said a Western intelligence official, summarizing the consensus among spy agencies that closely monitor Syria's weapons procurement efforts.

The first of the two Israeli airstrikes occurred on March 5, 2020, and targeted a villa and compound in a suburb southeast of the city of Homs, about 100 miles north of Damascus, the officials said. Syria's third-largest city, Homs was a previous hub for Syria's chemical-weapons production.

The strike on the villa was directly tied to Syria's successful procurement the previous year of a large quantity of tricalcium phosphate, according to two Western intelligence officials. The chemical, commonly known as TCP, has numerous nonmilitary uses, including as a food additive. But it can be readily converted into phosphorous trichloride, a heavily regulated compound that is restricted from import into Syria because of its known use as a precursor for sarin and other nerve agents.

The ultimate recipient of the TCP, the officials said, was a Syrian military unit known as Branch 450, a division of Syria's top military laboratory, the Scientific Studies and Research Center. The SSRC oversaw production of Syria's chemical weapons from the 1980s until at least 2014, when the program was officially dismantled under an agreement brokered by the United States and Russia.

Intelligence intercepts in the months following the March 2020 strike led to the discovery of additional sites, and what Israelis believed to be an ongoing effort to rebuild Syria's chemical weapons capability, the two Western officials said.

"There were more signs of them going back into production," one of the officials said.

The June 8 strike targeted a military storage bunker near An Nasiriyah, a desert village north of Damascus, and two additional sites near Homs. Of those two, one was described as an auxiliary facility for the SSRC's military laboratory in Masyaf, about 40 miles northwest of Homs.

Syrian news reports listed seven military casualties from that strike, including a Syrian colonel — posthumously promoted to brigadier general — identified as the "hero martyr" Ayham Ismail. The dead officer was said to be a military engineer assigned to the Masyaf complex.

Whether the attacks were fully successful in disrupting Syria's plans is unclear. Israeli officials intended the strikes to be preemptive, knocking out the country's production capabilities before actual weapons could be made, the two Western intelligence officials said. Any effort to bomb an existing stockpile of nerve agents risks unleashing plumes of lethal gases that can spread to nearby towns and villages.

Senior officials in both the Trump and Biden administrations became aware of the attacks and the underlying intelligence shortly after the strikes, current and former officials said.

U.S. intelligence officials long suspected that Syria was retaining, if not rebuilding, key aspects of its chemical-weapons capability. State Department officials in 2019 publicly accused Syria of secretly continuing its chemical-weapons program, citing in particular a chlorine-gas attack against opposition fighters that year.

The Biden White House is nearing completion of a comprehensive Syria policy review, one that is expected to call for punishing Assad for both past and ongoing violations of Syria's treaty obligations under the Chemical Weapons Convention.

"The administration has stated that it will hold Assad accountable for his actions," said Ambassador James Jeffrey, a veteran U.S. diplomat who oversaw diplomacy with Syria during the final two years of the Trump administration. "This should certainly include the evidence presented by [former Secretary of State Mike] Pompeo and others ... that Assad is trying to reconstitute his chemical weapons."

Human rights groups and independent investigators have previously accused the Assad regime of maintaining at least a latent ability to attack civilians with poison gases.

"Syria still has a chemical weapons stockpile, retains the capacity to produce chemical weapons today, and has the ability to carry out chemical weapons attacks on civilians," said Steve Kostas, a lawyer for the Open Society Justice Initiative, a nonprofit that seeks prosecution for perpetrators of chemical warfare. Kostas cited as evidence Syria's "undeclared production capacity" and repeated efforts to obstruct fact-finding missions by the Organization for the Prohibition of Chemical Weapons, the Hague-based international watchdog that investigates chemical attacks.

At the time of the outbreak of Syria's civil war in 2011, Damascus controlled one of the world's largest and most advanced stockpiles of chemical weapons, including hundreds of tons of binary sarin and VX, two of the deadliest chemical warfare agents ever made.

The Syrian government repurposed its chemical arsenal for use in attacks against anti-Assad rebels, and it shocked world in August 2013 with a massive sarin attack that killed an estimated 1,400 civilians — mostly women and children — in the Damascus suburbs. Faced with a threatened military strike by President Barack Obama, Assad agreed to renounce chemical weapons and to allow international inspectors to oversee the destruction of his entire weapons stockpile, along with all production centers and manufacturing equipment.

In an unprecedented international operation, some 1,300 tons of chemical agents were hauled out of Syria to be destroyed in incinerators aboard a specially modified U.S. ship in the Mediterranean Sea.

Yet Assad continued to use chemical weapons — chiefly the common industrial chemical chlorine, a crude substitute for deadlier nerve agents — in more than 200 attacks against rebel strongholds. The attacks persisted despite warnings by the Obama administration and despite two airstrikes on Syrian military installations ordered by President Donald Trump.

Assad also preserved a small portion of his sarin stockpile and used some of it on at least two occasions after 2017, U.S. intelligence officials later concluded. Since 2018, there have been numerous reports about alleged Syrian efforts to manufacture new chemical weapons, but without proof.

Weapons experts note that allegations about secret biological and chemical programs often turn out to be inaccurate, as U.S. intelligence agencies discovered after the U.S. invasion of Iraq in 2003. Syria's efforts to obtain the dual-use chemical TCP, is not, on its own, a smoking gun, observed Greg Koblentz, an associate professor and biodefense expert at George Mason University's Schar School of Public Policy and Government.

"Syria's procurement of this chemical, even through black-market channels, is not indicative of a nefarious purpose," Koblentz said. In the case of Syria, however, the allegation appears more credible because of the Assad regime's well-established record of cheating on its treaty obligations, he said.

"Syria has been hiding key components of its chemical weapons program ever since it signed the Chemical Weapons Convention in 2013," Koblentz said.

In the beginning, Assad may have decided to preserve his best weapons as a kind of insurance policy against the collapse of the regime. But now that Syria has regained control over most of its territory, he said, "it makes sense that the Assad regime would want to rebuild its chemical-weapons program to serve once again as a strategic deterrent against its longtime adversary, Israel."