OPEC+ sticks to modest boost in oil output despite omicron 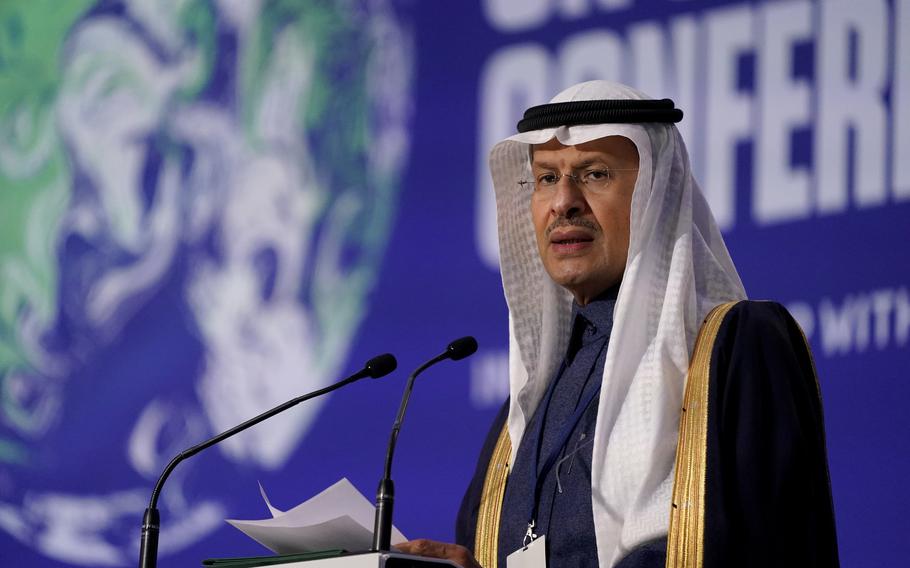 FILE - Saudi Arabia's Minister of Energy Prince Abdulaziz bin Salman Al Saud speaks at the COP26 U.N. Climate Summit in Glasgow, Scotland, on Nov. 10, 2021. OPEC and allied oil-producing countries meet Thursday, Dec. 2, 2021, under the shadow of a surprise new COVID-19 threat, with uncertainty over the omicron variant's future impact on the global economic recovery hanging over their decision on how much oil to pump to a world that is paying more for gasoline. (AP Photo/Alberto Pezzali, File) (Alberto Pezzali)

NEW YORK — OPEC and allied oil-producing countries decided Thursday to maintain the amount of oil they pump to the world even as the new omicron variant casts a spikey shadow of uncertainty over the global economic recovery from the coronavirus pandemic.

Officials from OPEC countries, led by Saudi Arabia, and their allies, led by Russia, voted to stick with a pre-omicron pattern of steady, modest monthly increases in oil releases — a pace that has frustrated the United States and other oil-consuming nations as gasoline prices rise.

The OPEC+ alliance approved an increase in production of 400,000 barrels per day for the month of January.

The fast-mutating variant led countries to impose travel restrictions when it emerged late last week. Lockdowns triggered by omicron could cut oil demand by nearly 3 million barrels per day in early 2022, according to projections by Rystad Energy.

The price of a barrel of U.S. benchmark crude fell with news of variant and then fell even further as OPEC+ revealed it wasn't going to curtail production. It was about $78 a barrel a week ago and was trading at about $65 a barrel Thursday. International benchmark Brent crude followed a similar path, falling from $79 a barrel a week ago to about $68 Thursday.

Saudi Energy Minister Abdulaziz bin Salman earlier this week played down any impact the little-understood variant would have on oil demand, telling the kingdom's Asharq al-Awsat newspaper: "We are not worried."

But OPEC ministers briefly postponed one of their meetings this week, hoping for more insight into whether the variant is likely to push the world back toward pandemic lockdowns or leave markets relatively unscathed.

Some analysts had predicted that the OPEC+ alliance — made up of OPEC members and allied non-members like Russia — would act cautiously Thursday, pending more clarity from medical experts on the new variant.

Before omicron's appearance, Thursday's meeting had been shaping up as a potentially fraught moment in a growing dispute between oil-supplying nations and oil-consuming ones, as the global economy rebounds from the worst of the pandemic downturn and demand for oil surged.

Angering the U.S. and its allies, OPEC+ has stuck to a plan to open the petroleum taps bit by bit — even as oil prices surged to seven-year highs — until deep production cuts made during the depths of the pandemic are restored.

With rising gas prices putting him under political pressure at home, President Joe Biden last week responded to OPEC's refusal to increase supplies more quickly by announcing the U.S. and other nations would release tens of millions of barrels of oil from their strategic reserves, boosting supplies and lowering prices.

Omicron's emergence has unsettled those dynamics.

White House press secretary Jen Psaki told reporters Tuesday that she knew of no plans to slow releases from strategic reserves, despite the advent of the variant.

"We continue to convey that we are hopeful they will release supply to meet the demand out there on the marketplace," Psaki said.