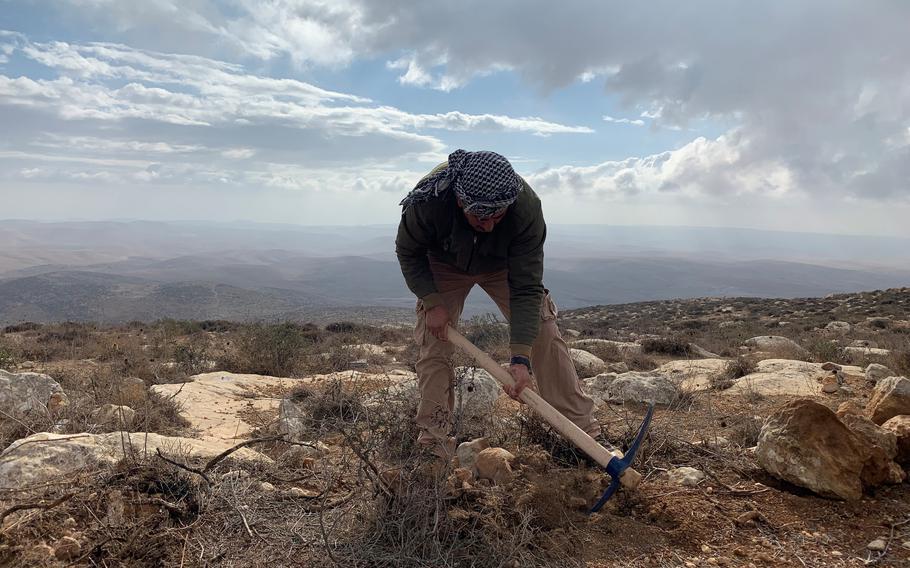 Palestinian farmer Said Awad works his land in the South Hebron Hills area of the West Bank. His farm is adjacent to a Jewish settlement, and residents there have contested the title to his land. (Steve Hendrix/The Washington Post)

SOUTH HEBRON HILLS, West Bank — Israeli settlers have dramatically increased their attacks on Palestinians in the West Bank over recent months, with violent incidents up about 150 percent in the past two years, according to data presented by the Israeli military at a defense ministry meeting this month.

A United Nations agency has separately found that 115 Palestinians have been beaten or otherwise attacked by settlers since the start of the year, with four fatalities. More than 300 incidents of property destruction, including olive trees cut and burned during the autumn harvest, were documented over the same time period.

The wave of beatings, arson, vandalism and rock-throwing — most taking place where Palestinian farms and groves are adjacent to Jewish settlements established on land captured by Israel in the 1967 war — has prompted some leaders of the Israel's governing coalition to call for a crackdown on settler violence.

Defense Minister Benny Gantz convened a meeting of security officials earlier this month and said the military would issue new orders against "standing by," directing soldiers to do more to prevent the incidents and protect Palestinians, according to media reports. "Hate crimes are the root from which terrorism grows and we must uproot it," Gantz said in a statement after the meeting.

The Israeli army is in charge of security in areas of the occupied West Bank where settlements are located, but videos compiled by Israeli human rights groups show soldiers frequently do little to intervene during the incidents. The groups say the soldiers are more likely to detain Palestinians than settlers and in some instances have even aided in the attacks. In other cases, however, settlers have clashed with Israeli soldiers.

In a statement, an Israel Defense Forces spokesman said, "Any claim that the IDF supports or permits violence by residents in the area is false."

For their part, settlers protest that the complaints ignore violence and vandalism by Palestinians in the West Bank and Israel. Those incidents range from tire slashings and rocks thrown at vehicles to stabbings and car-ramming attacks against Israeli soldiers. In May, a 19-year-old Jewish student was killed in a drive-by shooting as he waited at a roadside bus stop. A Palestinian man was convicted in the case. Advocates say crimes by Palestinians are aggressively prosecuted while settler violence typically goes unpunished.

On Wednesday, a group of more than 300 retired Israeli military, security and intelligence officials delivered a letter to members of the Knesset, Israel's parliament, decrying settler violence against Palestinians as a threat to the rule of law and the country's international standing. Palestinians harvest eggplants near the Israeli settlement of Susya in the South Hebron Hills area of the West Bank. They are assisted by Jewish volunteers from Israel who regularly come to help prevent violence and harassment of Palestinian farmers by nearby settlers. (Steve Hendrix/The Washington Post)

"Groups of settlers have been perpetrating deadly acts of violence against Palestinians — for the most part helpless villagers — in areas under our control," they said. "This is completely unacceptable from an ethical and humanitarian perspective, and it stands in contradiction to Israel's Jewish values."

At the scene of one violent encounter earlier this year, Said Awad was recently straining to pry a boulder from the dry earth where he hoped to plant an olive tree. As he worked, an audience looked on.

A squad of Israeli soldiers watched from a hillside to his left, stationed at the entrance to a Jewish outpost outside the West Bank city of Hebron. To his right, a group of Jewish Israeli activists watched from the opposite hillside, ready to come to Awad's aid at any sign of trouble.

The Palestinian farmer rested his pickax and shook his head. "I just want to do my work," he said.

There had been no soldiers or activists present in March when Awad arrived to find a strange herd of goats grazing on his barley plants. He shouted to chase them away, but men he identified as settlers from Mitzpe Yair, a neighborhood of the nearby Susya settlement, began throwing rocks. They were soon joined by more men in masks and some of them hit him with an iron bar, knocking him unconscious and fracturing his jaw, according to an Israeli police report.

Police said they reviewed video of the incident but could not identify any suspects among the masked attackers and made no arrests. They closed the file earlier this month.

So on a recent Saturday, about a dozen Israeli activists from the group Ta'ayush boarded a van in Jerusalem for the hour-long drive to Awad's field in the hopes that their presence would deter settler attacks, or at least spur soldiers to intervene if they did happen. Since the attack on Awad in March, soldiers have been stationed at the gate to Susya.

While some settlers milled about, none came close to Awad as he cleared rocks from the field. He knows from experience, though, that some of the stones he is stacking neatly will be scattered by his next visit.

"He's marking his territory so they don't take his land outright," said Assaf Sharon, a philosophy professor at Tel Aviv University who said he has been coming to the area as a witness, escort and occasional farmworker for almost 20 years.

Shmaya Berkowitz, a spokesperson for the Susya settlement, said he was unfamiliar with the attack on Awad and couldn't comment on it. In general, he blamed the Jewish activists for creating tensions between the settlers and Palestinians in the area. He characterized the groups like Ta'ayush as European-funded "anarchist organizations" that provoke clashes so they can film and exploit them online for money. Their ultimate goal is to undermine Israeli claims to the West Bank, he said.

"We happen to be in the front of a battle to undermine the legitimacy of the state of Israel," said Berkowitz. "People here are trying to bring up their children in peace. They don't wake up and think, 'How are we going to beat up an Arab today?' "

Not everyone in Prime Minister Naftali Bennett's coalition, which spans much of Israel's political spectrum, has joined in denouncing the settler violence. Many declined to attend a parliamentary conference on the issue Monday, leading to complaints from their left-leaning partners.

"Their silence and lack of interest is tantamount to the endorsement and encouragement of continued violence," said Health Minister Nitzan Horowitz, who leads the leftist Meretz party, according to the Haaretz newspaper.

Itamar Ben Gvir, head of the far-right Religious Zionist party, disrupted the conference by noting that a Palestinian gunman had fatally shot a Jewish tour guide a day earlier in Jerusalem's Old City. "A man was killed yesterday and you are holding a conference on settler violence, are you stupid?" he shouted before being escorted from the room, according to an account in the Jerusalem Post.

Jewish human rights groups have dismissed the prospect that government attention to the violence would have any lasting effect.

They say settler violence is part of an overall strategy of expanding Israel's presence in the Palestinian territories by making life difficult for those who have lived there for generations. This government-sanctioned approach, these groups say, includes designating swaths of land as military training grounds, routinely denying construction permits to Palestinians and demolishing their unapproved buildings, and restricting Palestinian access to water and power networks.

"This violence is not random; it serves Israel's interest," said Hagai El-Ad, head of the Israeli activist group B'Tselem. "Excuse me for being underwhelmed that the minister of defense is willing to convene a meeting."

The Washington Post's Shira Rubin contributed to this report.